Gregory Ulrich faces one count of second-degree murder, and four of first-degree attempted murder in the attack on the Allina Clinic in Buffalo. 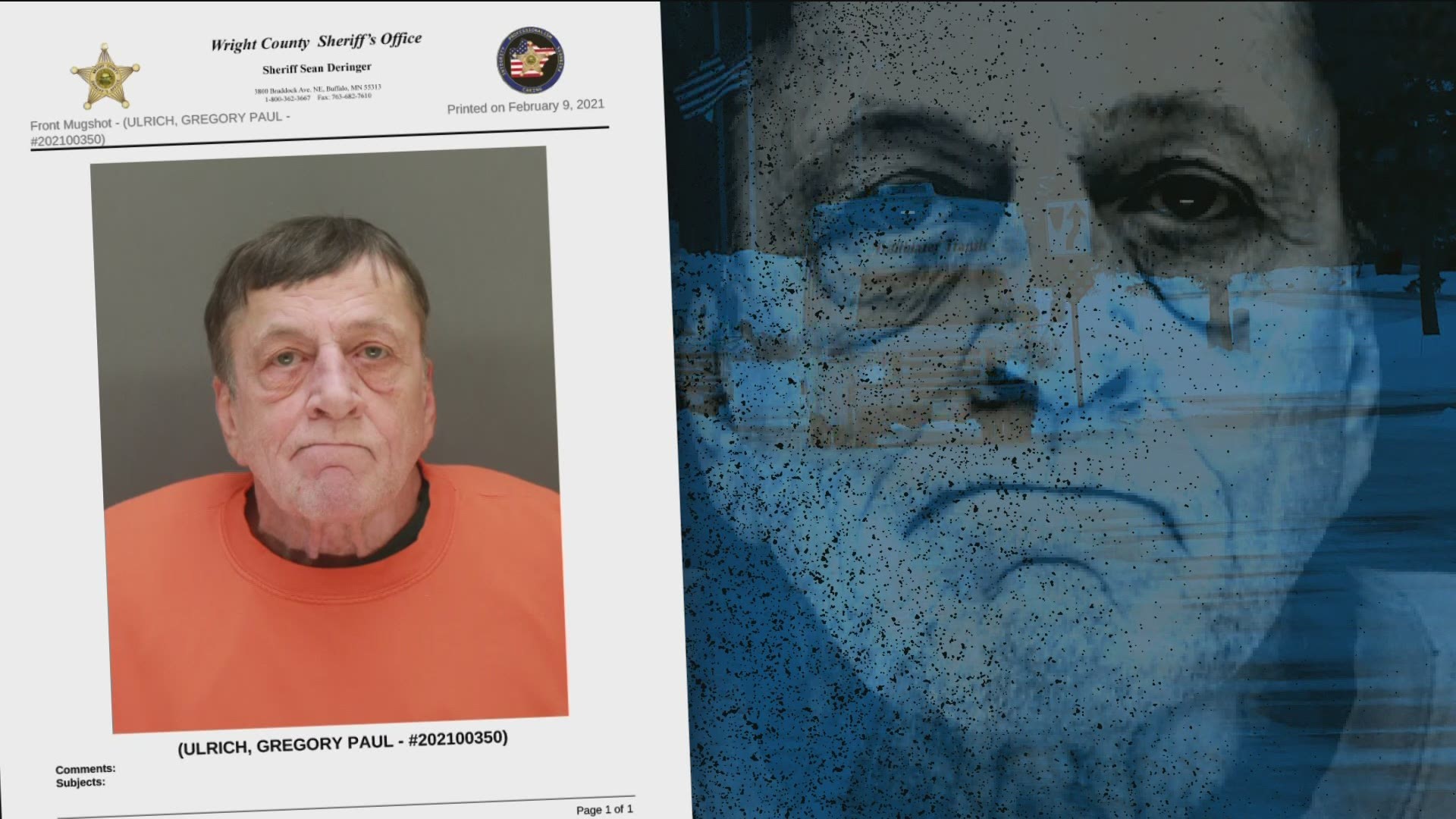 BUFFALO, Minn. — Murder and attempted murder charges were filed Thursday against a 67-year-old man who authorities say is responsible for shooting multiple people inside a clinic in Buffalo.

A criminal complaint details the case against Gregory Ulrich, now charged with one count of second-degree intentional murder, and four counts of first-degree attempted murder, along with counts relating to homemade explosive devices and possessing a gun without a permit. 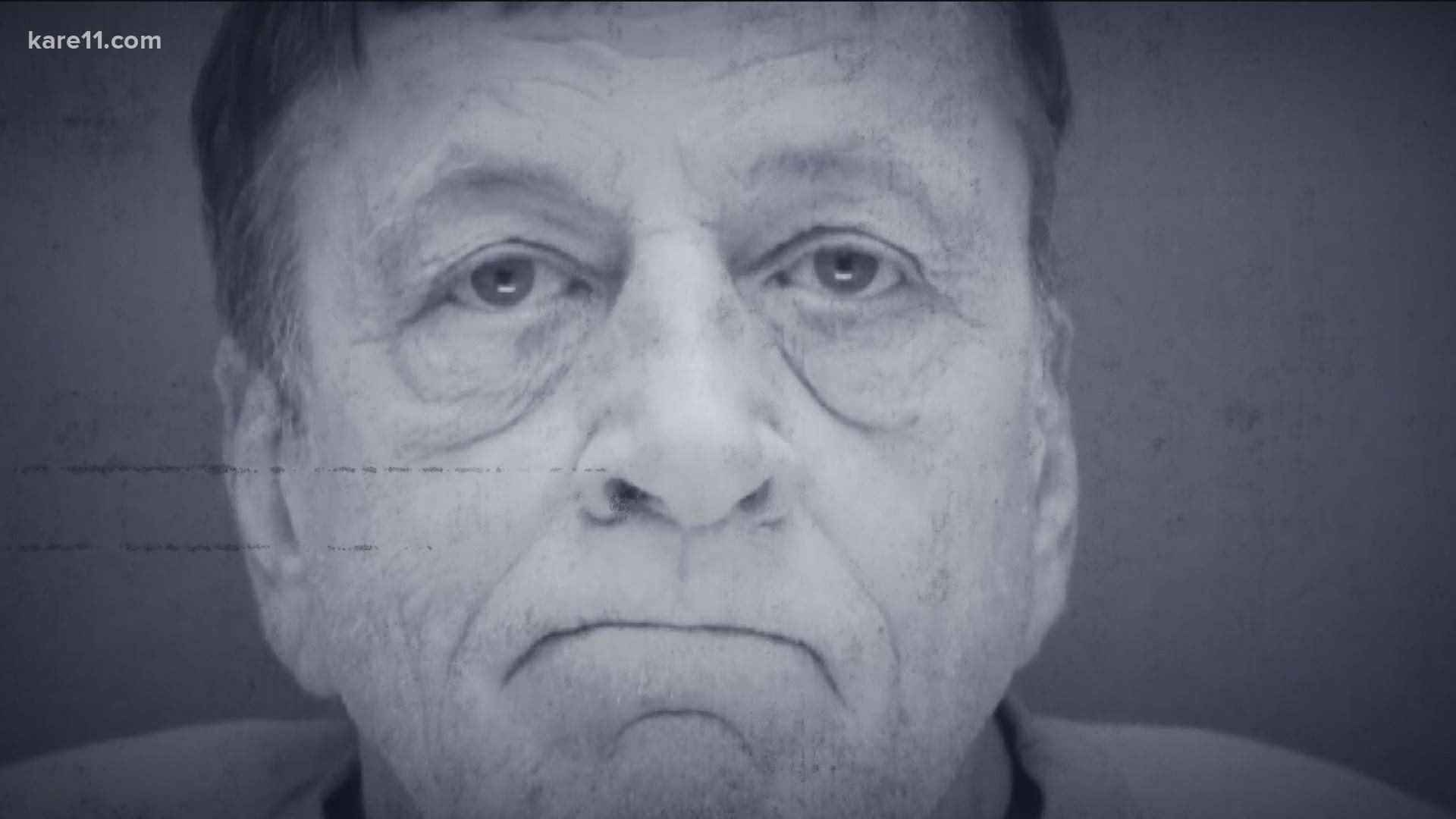 Ulrich appeared via Zoom during a quick first appearance Thursday morning that lasted about 10 minutes. During the hearing Judge Michele A. Davis advised the defendant of his rights, then granted the prosecutor's request that bail be set at $10 million with no conditions, or $5 million with conditions that include Ulrich remaining law abiding, showing up for court appearances, that he not possess firearms and remain drug and alcohol free, among other requirements.

A jail guard wheeled Ulrich in for his virtual appearance in a wheelchair. The defendant didn't say anything besides advising Judge Davis how to pronounce his name.

Court documents say investigators learned from multiple witnesses that on Tuesday, Feb. 9, Ulrich walked into the lobby of the Allina Clinic-Crossroads and was asked by staff if they could help him. In response, witnesses say the defendant pulled out a gun that authorities say was a Smith & Wesson 9mm that Ulrich did not have a carry permit for.

A criminal complaint filed in Wright County District Court says he walked into the reception area and shot one person the back, then another in the abdomen. Witnesses say Ulrich then entered the interior area of the clinic, where he shot a third victim in the leg twice as that person tried to flee. Investigators say the defendant kept firing, shooting a fourth victim six times, in the chest, abdomen, back, arm and forearm. The final victim, identified by her family as 37-year-old medical assistant Lindsay Overbay, was shot in the abdomen, with the bullet passing through her liver and spine before exiting through their back. Overbay later died of those injuries.

The criminal complaint says Ulrich detonated two improvised explosives during the attack, one at the entrance to the clinic and another in the clinic's interior. Both did extensive damage.

Prosecutors say another unexploded homemade bomb was discovered near a briefcase that was carried by Ulrich. It was examined by personnel from the Minneapolis and Bloomington bomb squads, who say it was made of black gun powder encased in a cylinder about six to eight inches long with a fuse ignition. Materials consistent with that explosive were located during a search of Ulrich's former residence in Buffalo, according to the complaint.

During a news conference following the virtual court appearance, Wright County Attorney Brian Lutes and Sheriff Sean Deringer lauded the response of deputies, Buffalo police officers and state troopers. Deringer said within moments 70 officers had descended on the scene, and entered the clinic not knowing if they would be targeted next by an active gunman. The sheriff says within 10 minutes Ulrich was confronted and in custody. Within 23 minutes victims were triaged and transported, the search for additional suspects completed and the building evacuated.

"What I saw, witnessed and heard that day was absolutely nothing short of heroic," Deringer stated. "They had unbelievable professionalism and truly let their experience and training take over."

The sheriff explained that 50 investigators from Wright County, Buffalo P.D., the Minnesota Bureau of Criminal Apprehension (BCA) and FBI are currently working the case. Deringer says the Super 8 Motel and Ulrich's former residence have been released by investigators, but that the Allina Clinic scene is still under law enforcement control.

Deringer also addressed questions that some are asking about how someone like Ulrich, who had repeated contacts with law enforcement through the years, could slip through the cracks and allegedly carry out something like the carnage that unfolded Tuesday.

"I think that it's human nature for us, we want to push blame, but now is not the time to necessarily push blame. We're all working very hard to bring some of this to a conclusion, to give closure and justice to those who have been victimized in our community," the sheriff said. "While I know there have been previous threats made by Mr. Ulrich, I also want you to know there has been nothing recent, in the past several months or a year, where we would have taken immediate action to prevent what happened Tuesday morning."

The charges filed against Ulrich Thursday are consistent with what Wright County Attorney Brian Lutes said he would pursue.

"I will aggressively prosecute Ulrich for this horrible crime and the pain he caused to the victims, their families and the entire community," Lutes vowed in a statement released Wednesday.

Ulrich is scheduled to make his first court appearance at 10:30 a.m. Thursday morning, followed by a press conference scheduled at 11:30 a.m. with Lutes and Wright County Sheriff Sean Deringer to discuss the charges.

The revelation of the Smith & Wesson pistol investigators say Ulrich used to carry out the clinic shooting supports what the defendant's former roommate told KARE 11 about Ulrich buying a Smith & Wesson last year. While the complaint says Ulrich did not have permit to carry the weapon in public, it is unclear whether he had a permit to purchase the gun. The two permits are separate entities.

Police Chief Pat Butke tells KARE 11 News he is trying to make private gun permit data for Ulrich public through a court order, which would help explain unanswered questions about how he had a gun after a probation agent highly recommended Ulrich not be allowed to own one.

For seven nights leading up to the shooting at the Allina Health Clinic in Buffalo, the manager at the Super 8 motel says Ulrich stayed there. She says he acted friendly and "normal" and would either get picked up every day by a bus or rideshare company.

The manager said she never saw him bring anything suspicious into his room where authorities say they found multiple possible explosive devices, but on Monday, Ulrich told her his stay was coming to an end, adding "Tomorrow, I'll be finishing my work. If I don't finish my work tomorrow, I'll be extending my stay."

A KARE 11 Investigation discovered Ulrich previously threatened one of the clinic’s doctors in 2018 with “threats of mass shooting and/or other scenarios against the hospital,” according to a Buffalo Police report.

Buffalo police said SWAT teams were dispatched to Allina Health Clinic-Buffalo Crossroads at 10:54 a.m. Tuesday on reports of multiple shots fired. First responders discovered five victims with injuries, along with Ulrich, who was taken into custody.

Hennepin Healthcare said one shooting victim, later identified as Lindsay Overbay, was transported to HCMC and died from her injuries Tuesday afternoon. North Memorial reported the four other victims were taken to its hospital, with one discharged by Tuesday afternoon.

North Memorial Health confirmed as of 10:30 a.m. Thursday, one victim was in fair condition and two were in good condition.