MPD took two teenagers into custody after a crime spree that ended with a stolen car flipped over, according to the department. 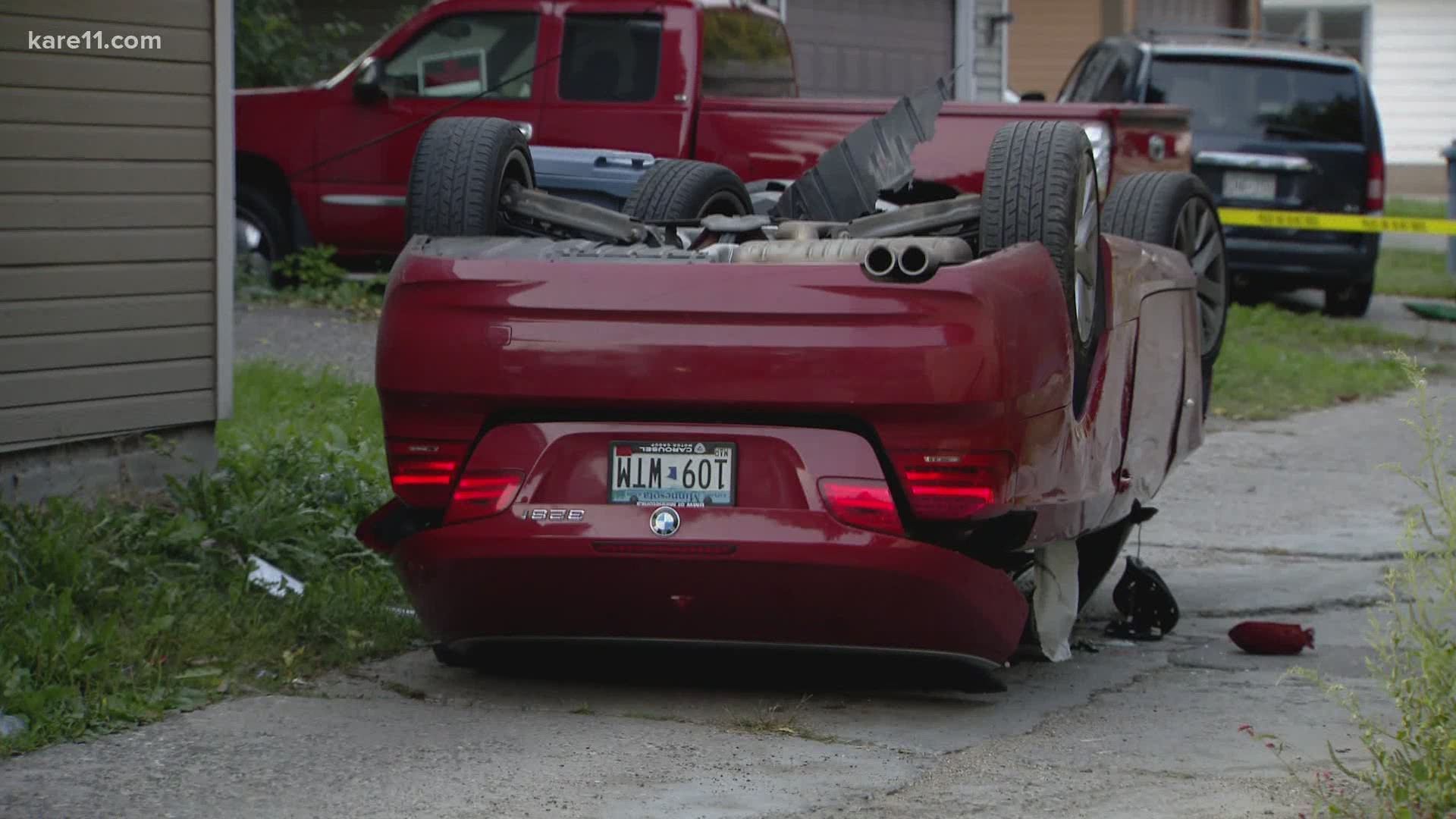 MINNEAPOLIS — Minneapolis police took two teenagers into custody on Tuesday evening after a reported armed carjacking and robbery spree, including one suspect who tried to escape officers by running into a private home in north Minneapolis, according to a department spokesperson.

Minneapolis public information officer John Elder said the initial carjacking call, involving a stolen red BMW, happened near 24th Avenue South and 10th Avenue South in the Phillips neighborhood of south Minneapolis. Later, Minneapolis police say they responded to a report of an armed robbery near Cedar/Riverside and the University of Minnesota’s West Bank, in which the suspects’ car matched a similar description to the red BMW. Elder said police received multiple 911 calls about the same BMW driving dangerously through city streets, leading them to attempt a traffic stop in the Jordan neighborhood of north Minneapolis.

“The vehicle attempted to elude officers,” Elder said, “and accelerated rapidly, attempted to cut up an alley.”

The red BMW flipped over, landing upside down on the pavement. Police say at least two people ran from the car. They say they caught one immediately, and that the first suspect was bitten by a K-9 while trying to escape. His injuries are considered minor.

Police say they've taken two teenagers into custody after a carjacking, robbery and chase ultimately ended with this stolen red BMW flipping over on Emerson in North Minneapolis. The reported crime spree spanned nearly 10 miles across the city. (photo by @DPet_KARE11News) @kare11 pic.twitter.com/oDv5nz9jDr

The other suspect, meanwhile, ran into a nearby home on Emerson Avenue. The homeowners, who were not present at the time, were alerted and helped officers enter the home, where the suspect gave up immediately and was taken into custody, according to Elder.

Quita Sears’ mom lives in the house where the suspect barricaded himself. The whole family was grateful that nobody was home, including the family’s grandchildren.

Minneapolis Police connected the suspects to a series of carjacking rings in the city.

“It’s sad these types of things happen. Me and my team, we’re always out here, trying to be positive mentors,” said peace activist KG Wilson, who responded to the scene and saw one of the teenagers taken away by police in handcuffs. “We’re out here in the community begging them, showing them love, trying to get them jobs, we are getting them jobs. We’re doing everything we can. But some individuals just refuse … and this is one of the outcomes.”

Minneapolis police also say they are investigating whether a shots fired call on Lowry Avenue in north Minneapolis was connected to the same suspects on Tuesday. Elder said nobody was hit, but that it was fired in the area of a man and his 11-year-old child.