The arrests made on Friday bring the total number to at least five Minnesotans implicated in the Jan. 6 events. 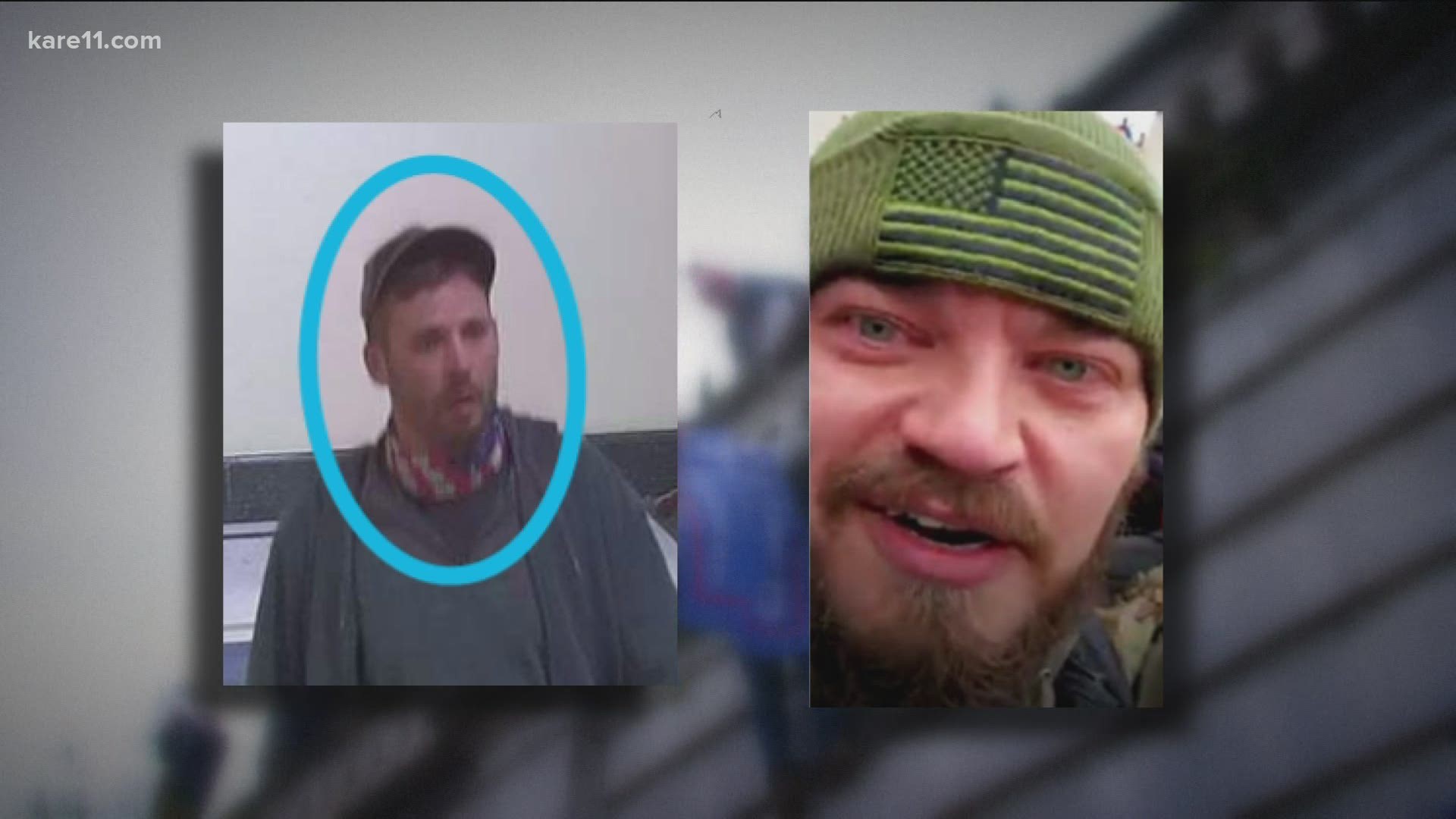 WASHINGTON D.C., DC — The Federal Bureau of Investigation's Minneapolis office announced Friday that two more Minnesota men have been arrested and charged in the insurrection at the U.S. Capitol.

Brian Mock, 42, from Minneapolis and Daniel Johnson, 29, from Austin, were both arrested Friday morning on "charges relating to criminal acts" on Jan. 6 in the nation's capitol, according to a post on the FBI Minneapolis Twitter account.

Mock is charged with four federal counts including assaulting an officer, entering and engaging in disorderly conduct in a restricted building, obstruction of law enforcement during civil disorder, and acts of physical violence in a capitol building or grounds.

According to court documents, at about 2:30 p.m. on Jan. 6, Mock is shown on police body camera video shoving and kicking a capitol police officer on the ground.

About 30 seconds later, Mock was seen and heard on body cam video shouting “Get out! Go!” several times at officers, according to the federal complaint.

Four minutes later, Mock was seen on camera shoving a second capitol police officer, taking the officer’s riot shield and passing it back to the violent mob.

After a Twitter account named @SeditionHunters posted pictures of a man at the Capitol seeking more information from the public, a witness contacted the FBI linking the pictures to a post from Mock’s Facebook page, according to court documents. The post shows Mock, in the same clothes as seen during the riot, posing with a woman in front of the Minnesota pillar at the World War II Memorial in Washington, D.C.

The Facebook post had the underlying caption, “Before we went to the Capital (sic)… we did a little sight seeing…”

Court documents show another Facebook post from Jan. 6, believed to be from Mock’s girlfriend, which says, “Teargassed 6 times, pepper sprayed, and mustard gassed at the end. But we stayed true to being Patriots, marched to the Capital (sic) and stormed the Frontline… no regrets… ashamed of the blue that harmed everyone there to stand for the cause…”

The FBI was also given a Facebook post from Mock’s account three days before the riot that says “This is not the war we wanted” … “There has been a storm brewing and it will sweep through this country very soon.”

Eight people in total reached out to the FBI with tips on Mock. One witness told the FBI Mock returned back to Minnesota and bragged of assaulting an officer while in Washington, D.C. Another witness gave the FBI a text message from Mock admitting to participating in the insurrection, according to the complaint.

In a Facebook post from Mock’s account on Jan. 8, a message said, “I went to the Capitol not knowing what to expect but said goodbye to my 4 children, not sure if I was going to come home. I was at peace with that knowledge,” according to the complaint.

In 2010, Mock pleaded guilty to a second-degree assault with a dangerous weapon.

“I was one of the first ones inside the capitol building,” Johnson wrote in a Facebook comment, according to court records.

Investigators say video footage from inside the capitol during the raid shows Daniel Johnson with his father Daryl Johnson of Iowa.

A warrant served on Daryl Johnson’s Facebook account showed two posts from Daryl saying “What the media is saying is completely false (sic) It was Antifa causing the damage. I was there!”

Another post says, “The protestors were peaceful until the police started throwing flash bangs and gas at the peaceful crowd.”

In a private Facebook message, Daniel Johnson wrote “We stormed capitol hill” and “Lol Dad and I were one of the first ones inside,” according to the complaint.

Pictures from the insurrection of both Daniel and Daryl Johnson were identified by law enforcement from St. Ansgar, Iowa and Mower County, Minnesota, which both said they’ve had run-ins with them before. Investigators mention in the complaint that Daryl Johnson’s father was the mayor of St. Ansgar once.

At least three other Minnesotans have been arrested and charged in connection with the insurrection, including 26-year-old Jonah Westbury from Lindstrom, 31-year-old Jordan Kenneth Stotts of Moorhead, and 39-year-old Victoria White from Rochester.

Meanwhile in Congress on Friday, Senate Republicans blocked the creation of a bipartisan panel to investigate the deadly Jan. 6 breach of the U.S. Capitol. The Senate vote was 54-35. Sixty votes were needed to take up the House-passed bill that would have formed an independent 10-member commission evenly split between the two parties.