Judge Kathryn Quantaince noted how the former officer endangered others besides Ruszczyk before sentencing Noor to 57 months in prison. 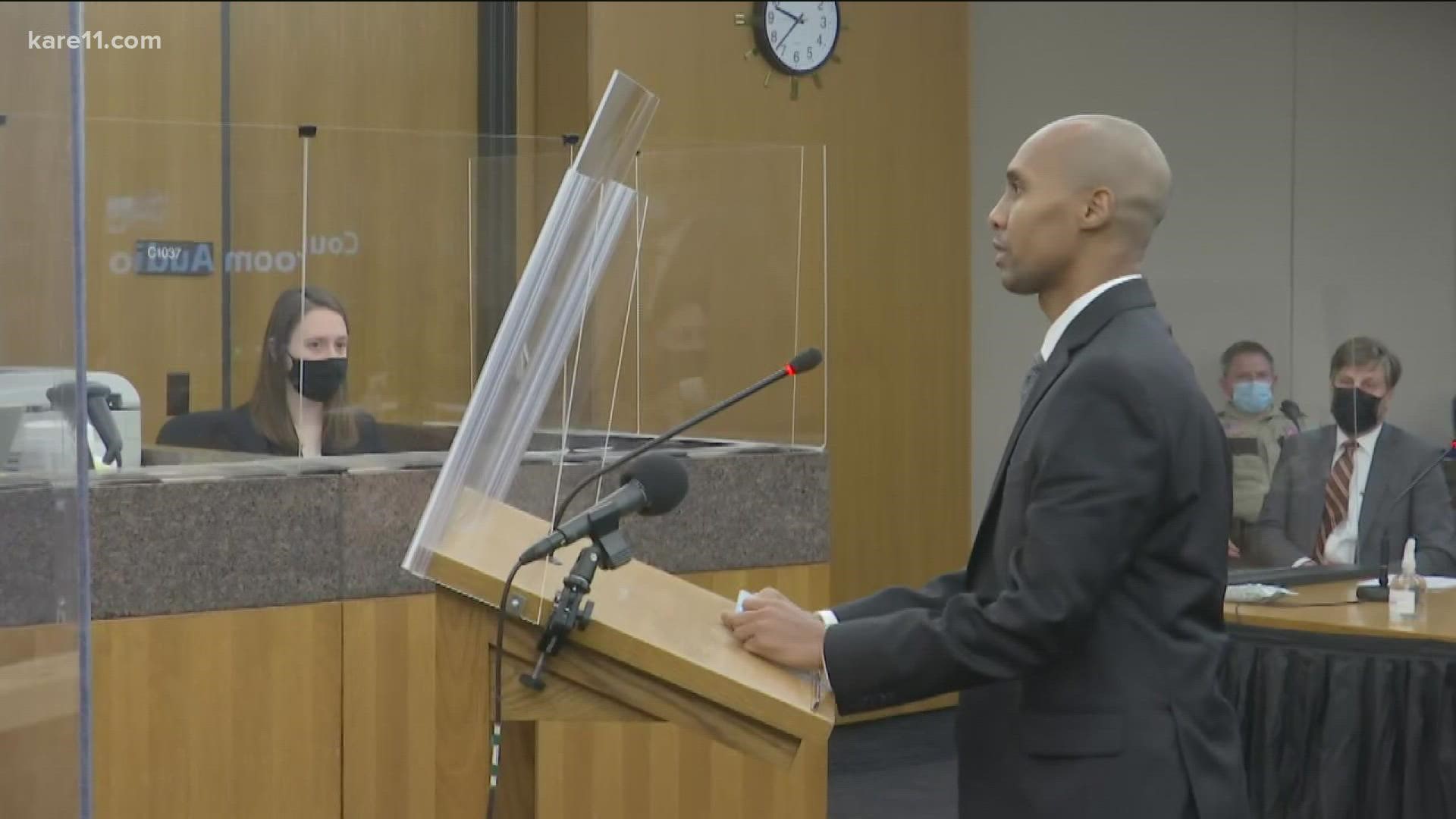 MINNEAPOLIS — A Hennepin County judge dismissed pleas for leniency in sentencing former Minneapolis police officer Mohamed Noor to 57 months in prison for his role in the 2017 shooting death of Justine Ruszczyk.

Judge Kathryn Quaintance acknowledged Noor's remorse and attempt to  be a model prisoner, but noted that he endangered not only his police partner but a bicyclist and neighborhood residents on the night he fired out the window of a squad car and killed Ruszczyk.

"You did shoot across the nose of your partner. You did endanger a bicyclist and residents of a community of surrounding houses on a summer Saturday evening," Quaintance told Noor. "One household was entertaining guests on a porch… these factors of endangering the public make your crime of manslaughter appropriate of the high end of the guidelines." 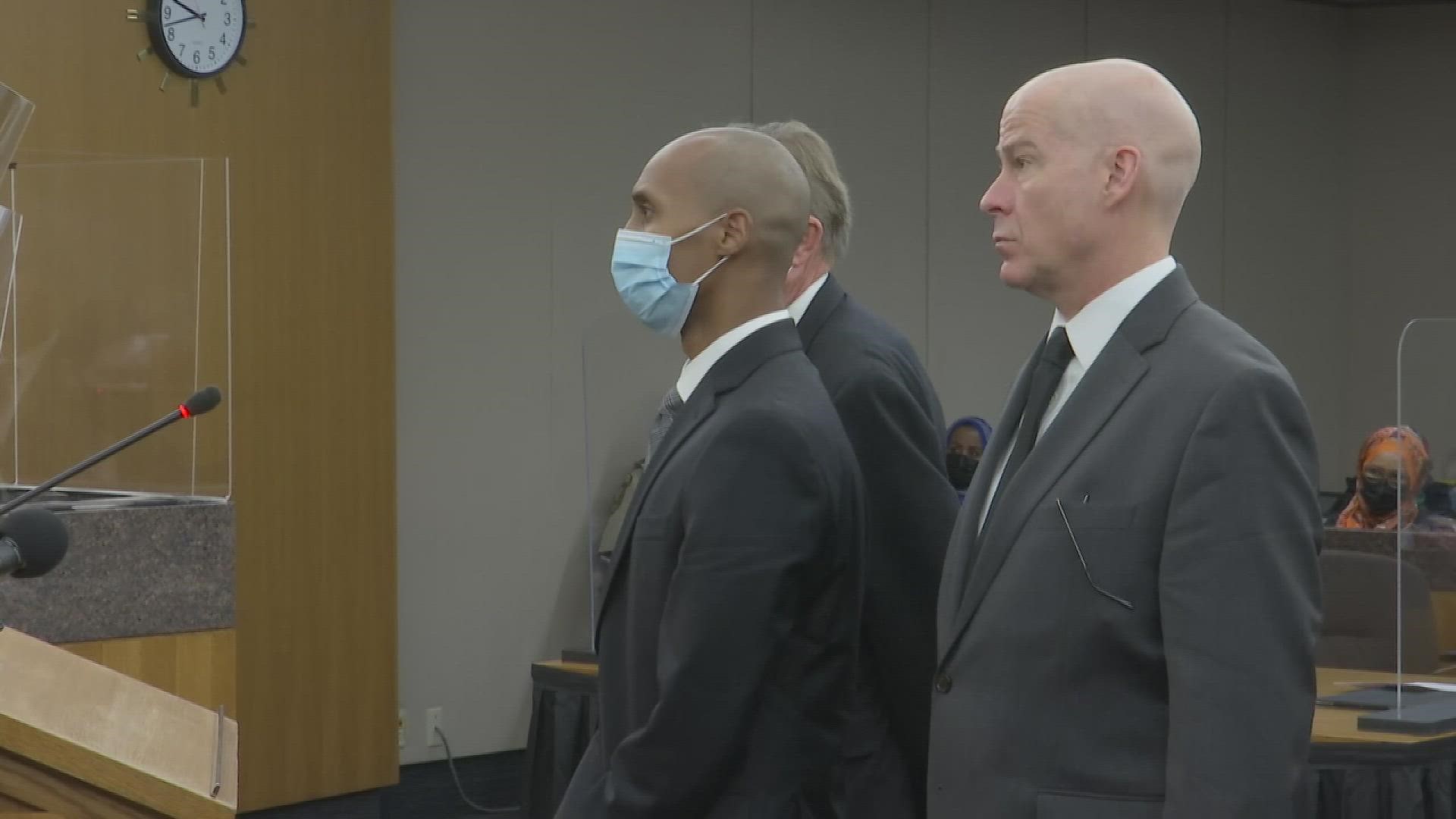 KARE 11's Lou Raguse said following the sentencing that considering Noor's time already served and Minnesota's standard that a convicted person serve two-thirds of their sentence, the former officer has approximately 8 months left to spend in prison before he could be placed on parole.

Noor was immediately remanded to the custody of the Hennepin County Sheriff's Office.

In Minnesota, inmates serve 2/3 of a term in prison then the last 1/3 on supervised release which works as sort of an automatic parole.

The former officer walked into court promptly at 9 a.m., and listened intently as his legal team and Hennepin County prosecutor Amy Sweasy began making their case in front of Judge Kathryn Quaintance before she handed down her decision on how much time Noor should spend in prison for a conviction on charges of second-degree manslaughter.

Proceedings began with the reading of victim impact statements from those who loved Justine. Her fiancé Don Damond read a statement virtually, saying he still cries often, thinking of the woman his misses. "I will always love her, and am deeply guided by her," Damond said, his voice breaking.

In his statement he decried the supreme court decision to throw out the murder charge, but added that Justine would forgive Noor for his actions. He asked Noor to be honest and contrite, and be an example of how to transform. "Justine was and is still my greatest teacher.. given her example I want you to know that I forgive you, Mohamed," Damond said. "All I ask is that you use this experience to do good for other people. Be an example of how to transform beyond adversity. Be an example of honesty and contrition, this is what Justine wants."

"Our work is to heal by demonstrating we can truly change and do good for others," he added. "This is Justine’s example of life and now even in death, she shows us how to live."

A statement read in court from Justine's sister-in-law Katerina Ruszczyk directly addressed the injustice felt by her family after the announcement of the vacated sentence. "The killer Noor may be getting out early than we'd hoped, but he is still a murderer in my mind," she wrote. "This is a legal loophole, not one of moral triumph."

Jason Ruszczyk's statement focused on the pain of loss and absence of his beloved sibling. "I wish I had my sister back, for her bare feet to feel the soil. I wish for my sister and me to sit by the door. Those crystal clear days where the blue of the sky would compete against the blue of the ocean. I wish for her laughter to be present at family dinners. I wish for my children to have their aunt’s love and tenderness in their lives," Jason Ruszczyk wrote. "If I return to Minneapolis I will visit the tree. My sister is the best person I know and I miss her terribly."

When given a chance to address the court Noor thanked Don Damond and apologized to Justine's family. "I’m deeply grateful for Mr. Damond's forgiveness. I’m deeply sorry for the pain I caused that family, and I will take his advice and be a unifier," Noor said.

The former officer received a 12 and a half year sentence in May of 2019 after being convicted of both third-degree murder and second-degree manslaughter. But a decision by the Minnesota State Supreme Court to throw out the murder conviction made today's resentencing necessary.

State statute recommends a maximum of 10 years for second-degree manslaughter. Defense attorneys Thomas Plunkett and Peter Wold are asking Judge Quaintance for 41 months, an option that could have Noor released in less than a year considering the 29 months he has already served.

Noor is currently housed at a facility out of state, after being transferred from the Minnesota Correctional Facility at Oak Park Heights for his own safety.

Ruszcyyk was fatally shot in July of 2017 after she had called 911 to report what she thought was a sexual assault taking place in the alley behind her south Minneapolis home. Noor and his partner responded, and Noor shot Ruszczyk as she approached the squad, thinking she was a threat. His partner testified during Noor's trial that they were "startled" as she walked up from the rear of the vehicle.