Two suspects are in custody after traffic cameras showed a car colliding at low speed with a squad car in Bloomington. 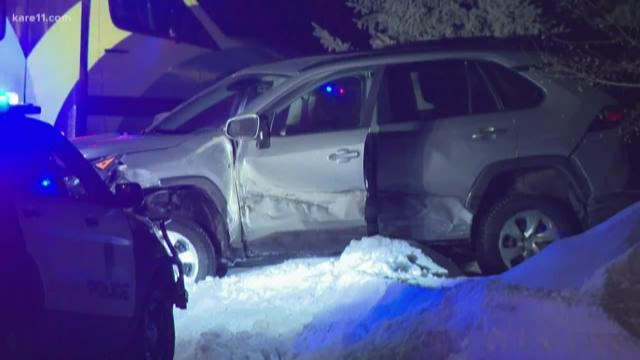 BLOOMINGTON, Minn. — A police pursuit ended with a small collision near the drive-through line of a McDonald's during the prime dinner hour on Wednesday, ultimately resulting in at least two suspects being placed in law enforcement custody.

The encounter began around 5:45 p.m. when Shakopee Police asked Minnesota State Patrol to help them find a stolen car on Highway 169. A trooper tried to pull the vehicle over but the driver did not stop for the lights or sirens, spokesperson Lt. Gordon Shank said, leading to a brief chase on the highway. When the suspect exited onto Old Shakopee Road, State Patrol deemed the pursuit too risky and called it off.

Minutes later, police spotted the car about three miles north, in the parking lot of a gas station on Bloomington Ferry Road. An eyewitness said the suspect had stopped to pre-pay for gas — but drove away immediately when he saw flashing lights racing toward him again.

"All the sudden he just shoots out from here, slams into this car right here and takes off," the witness said, pointing to a visibly-damaged green Honda next to a gas pump.

After leaving the gas station lot, traffic cameras showed the suspect driving a silver vehicle toward the McDonald's drive-through, where he passed several cars waiting in line for food. From the opposite end of the drive-through line, police then swarmed and cornered the suspect. The video showed him colliding with a squad car at low speed before attempting to run up a snow bank. After getting stuck, the suspect backed into a ditch.

Bloomington Police said the driver ran away from his own car before he was arrested in a nearby neighborhood. State Patrol said a total of two people are in custody and that they are not searching for anyone else.

Police have not said if the suspects were wanted for any other crimes besides the fact that the car was reported stolen.

OTHER NEWS: No injuries reported in major house fire on Lake Minnetonka

OTHER NEWS: Bald eagle recovering after being rescued in Brooklyn Center