The suspect continued driving at high speeds but then crashed into a pole at the intersection of Highway 96 and Highway 61. 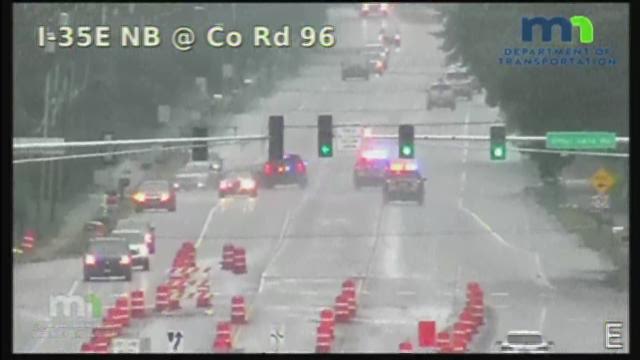 WHITE BEAR LAKE, Minn. — A Brooklyn Park man is in custody after a wrong-way pursuit that ended shortly after the suspect crashed into a pole Wednesday afternoon.

A State Patrol trooper arrived to assist a vehicle in a ditch at Highway 96 and Greenhaven in White Bear Lake.

The trooper saw a vehicle parked next to the vehicle in the ditch. When the trooper was coming to a stop at the location, the parked vehicle accelerated.

The trooper activated his lights and sirens but the driver continued to flee, officials said.

The trooper used pursuit intervention maneuvers to try to stop the vehicle but was not successful. The driver went on to go the wrong-way on Highway 96, according to authorities

The suspect continued driving at high speeds but then crashed into a pole at the intersection of Highway 96 and Highway 61.

The driver then fled on foot but was shortly after taken into custody.

The vehicle was reported to be stolen from Ramsey County, police said.

The man had an outstanding felony warrant out of Anoka County, according to officials.

The man was taken to Ramsey County Jail.

Two passengers were in the vehicle during the pursuit. They were transported to Regions Hospital with minor injuries.