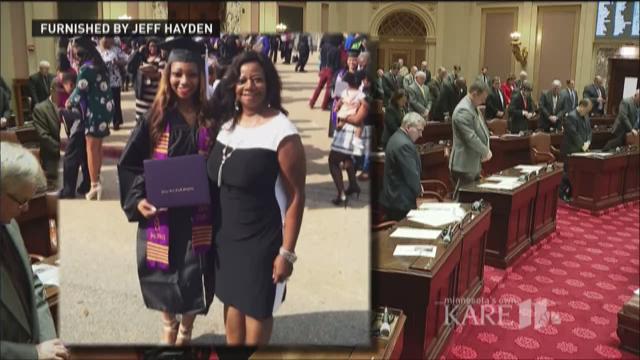 ST. PAUL, Minn. -- Twin Cities native Taylor Hayden would've turned 26 Thursday, the same day she was memorialized in the Minnesota Senate and honored in that chamber with a moment of silence.

Hayden was murdered last July while vacationing with girlfriends in Atlanta, an innocent bystander caught in the crossfire outside an Atlanta night club. And she was the younger sister of Sen. Jeff Hayden of Minneapolis.

"As they were shooting at each other they ran into the crowd and essentially used by sister as a human shield," Sen. Hayden told reporters, as he announced the Taylor Hayden Gun Violence Prevention Act.

The 2009 Wayzata High School graduate had finished her college degree and just started a new job in Houston at the time she lost her life.

"She represented everything that we want our children to represent," Sen. Hayden said.

His bill would dedicate $200,000 in state funds every year to be awarded to nonprofit organizations for gun violence prevention and awareness efforts.

"We want to celebrate her. We want people to understand that gun violence has to end," Taylor's mother Joyce Hayden explained.

"Let’s figure out ways to help all of us understand that we don’t need to use a gun to settle our differences."

A large contingent of DFL lawmakers, police chiefs, prosecutors, safety advocates and families of other victims gathered with the Hayden family at a State Capitol press conference to announce a renewed push to stem gun violence.

"Sure we can put people in prison and put them away, but how do we really stop it? We talk to people about when gun violence makes no sense!" Hennepin County Attorney Mike Freeman told reporters, explaining why he liked Hayden's legislation.

"Yes, $200,000 is a drop in the bucket but it’s an important drop because there are organizations out there that can help enhance the dialog."

Minneapolis Police Chief Janee Harteau mentioned two high profile cases of lives claimed by stray bullets intended for someone else, including the unsolved 2011 killing of Terrell Mayes, the three-year-old boy struck by a round that passed through the wall of his family's apartment.

The more recent case of the Birdell Beeks, a Minneapolis grandmother hit by a random bullet last May while sitting in a minivan. Harteau said her investigators were able to connect the suspect's gun to 10 other shootings in the north side of the city.

"I’m proud to support any measures that will help save lives. Mothers should never have to bury their children," Harteau said, as tears welled in her eyes.

One of those measures would allow persons to seek a court order to temporarily withhold guns from mentally unstable family members.

"You'd be able to petition the court to have firearms removed from that person on a temporary basis, and yet ensuring all of the rights – due process rights – we in this country value so much," Maplewood Police Chief Paul Schnell explained.

Rep. Dave Pinto of St. Paul, who is also prosecutor, recalled the 2015 murder of Michelle Marie Ploetz by her estranged boyfriend Timothy Scott Hendricks. Ploetz had agreed to let Hendricks see their baby, when he suddenly shot her in the head as her father drove them and the baby to a restaurant.

"Tim Hendrix had been brought to the hospital for mental health concerns nearly a dozen times before he murdered her -- a dozen times," Rep. Pinto said.

"But there was no legal way to remove the gun from him."

That idea has the support of Tim Nelson, who lost his girlfriend Barbara Larson in a domestic shooting in December.

"Barbara’s ex-husband went to the Faribault Chamber of Commerce and murdered her, and then took his own life less than 48 hours after having a restraining order served on him," Nelson told the crowd.

Nelson is the flight instructor who tipped off authorities in 2001 about Zacarias Moussaoui, the so-called "20th Hijacker" in the 9/11 attacks plot. He said Barbara Larson knew her ex-husband, retired Faribault police officer Richard Larson, was becoming more erratic.

Another piece unveiled Thursday would require background checks for those who buy or receive guns from another private citizen. It would make it a gross misdemeanor to transfer a gun -- sell it or give it away -- to someone who hasn't undergone a background check.

Sen. Danny Schoen of Cottage Grove, who is also a police officer, said many people he runs into in his job are surprised to learn such transfers aren't covered by background check laws already.

"They say 'Hey, I want to sell my gun to my neighbor, so where do I go do this or that?' And I say, 'Well you walk over there and sell it'," Sen. Schoen explained.

"And they say, 'I don’t have to do any paperwork?' And I say, 'No.' Their first answer is that doesn't seem right."

The bill carves out some exceptions. Selling a gun to a federally licensed firearms dealer, or to an immediate family member wouldn't require a background check. Transfers of antique guns and historically significant firearms would be excluded from the requirement.

Because Republicans now hold a majority in the Senate, Hayden would need to convince at least some of them to support his bill.

The other two pieces of legislation -- background checks, and mental health petitions -- face a tougher journey in the Republican controlled legislature. Both ideas have failed to garner GOP backing in the past.