On Christmas, an EMS dispatcher talked a mother and father through a delivery as they attempted to drive from Chisago County to United Hospital in St. Paul. 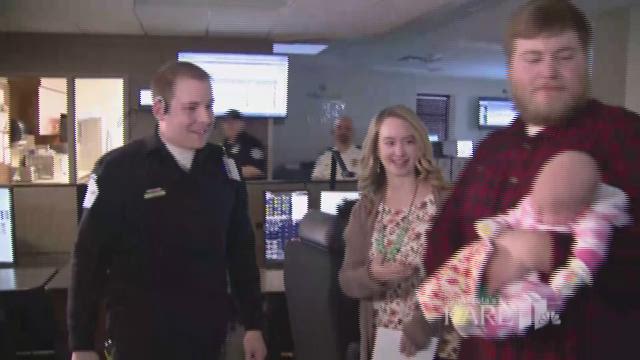 ST. PAUL, Minn. - Inside the Allina Health EMS Communications Center where he works, dispatcher Jake Prager met Hannah and Taylor Lindeman and their 8-week-old daughter Poppy in person for the first time.

But on the day of Poppy's birth, they met over the phone.

It was Christmas Day and Poppy wasn't due for another four weeks when the Lindemans realized they'd better head from Chisago County to United Hospital in St. Paul.

"When I was sitting and opening presents, contractions were getting more and more painful, and once I hit a certain level of pain, I was like OK she's coming. And when we were in the car, it was like pain like I've never quite experienced," Hannah said.

Less than 20 minutes into their drive, Hannah and Taylor realized they weren't going to make it to the hospital in time. So they called 911, and the dispatcher connected them with Jake.

"I think Taylor was outside the side door," said Prager.

Jake talked Taylor and Hannah all the way through the delivery. And Poppy was born before the first emergency responder arrived.

"I kind of think it was a miracle," Hannah said.

"It's just kind of destiny or whatever. It's supposed to happen," Prager said.

Destiny that the call went to Jake. He worked in labor and delivery for two years in the Navy.

And in a little over a year as an EMS Dispatcher for Allina Health, he's already delivered four babies by phone.

But Poppy is the first baby that he's gotten to meet after the fact.

"Not all of them are born on Christmas on the side of the roadway," the Lindemans laugh.