Chen treated Cassady back in Boston, when Cassady, then 24 years old, was diagnosed with a dangerous pontine cyst. 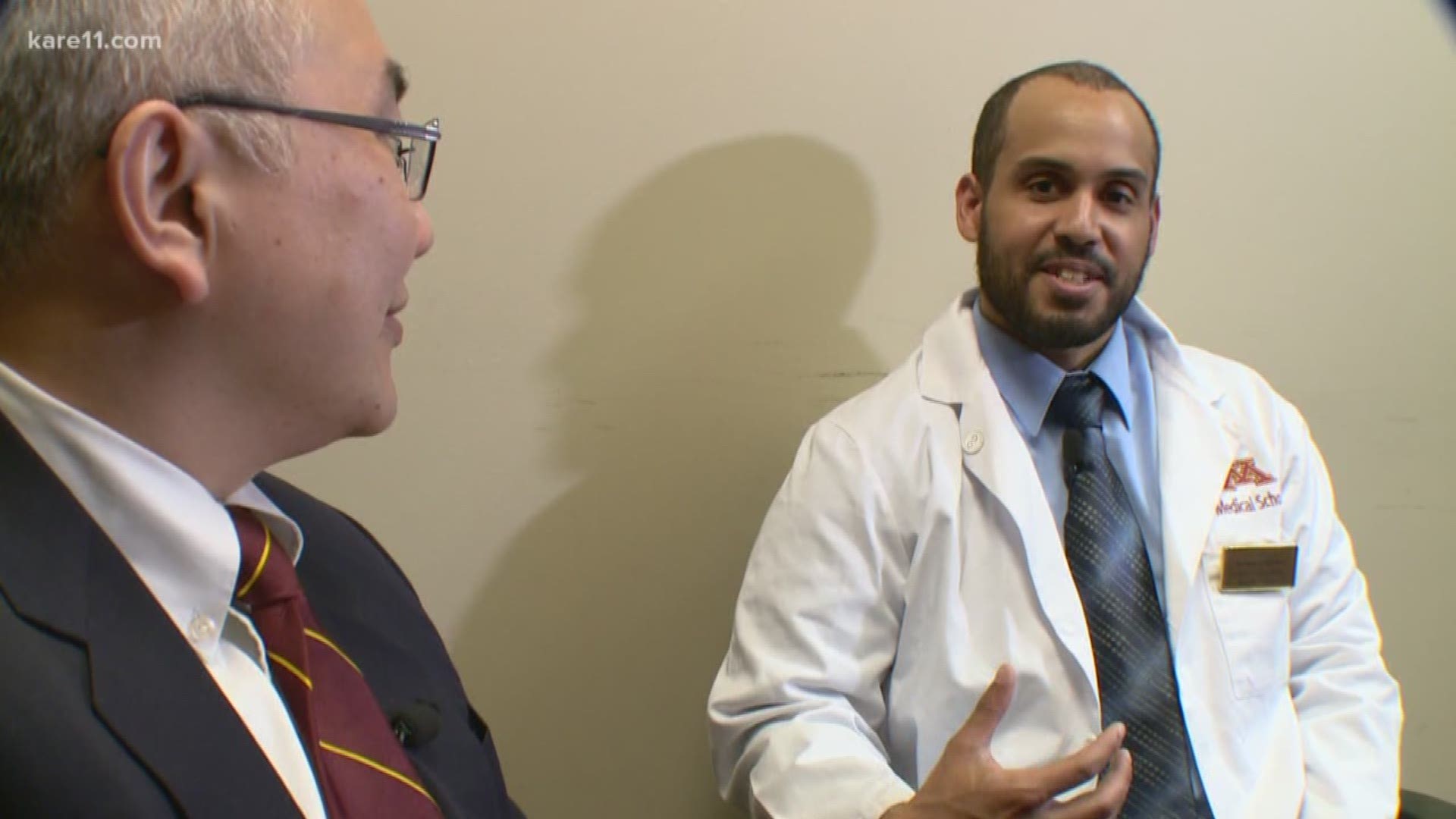 MINNEAPOLIS, Minn. – University of Minnesota medical student John Cassady was walking on campus when he noticed a familiar figure in the distance.

Dr. Clark Chen, head of the U of M neurosurgery, turned around on the street. It took just a second before he recalled Cassady.

“I realize, oh my gosh, this is a patient I have treated a decade ago,” said Chen. “It was an incredible experience.”

Chen treated Cassady back in Boston, when Cassady, then 24 years old, was an MIT graduate student experiencing symptoms like tingling in his arms, and he struggled with his eye movement. He went to Massachusetts General Hospital, and never left.

Cassady was admitted into the ICU, where he met Chen, who told him he had a golf ball sized cyst in his brain stem, called a pontine cyst.

“I realized this is a very unusual disease and I realize I need to get help from other experts,” recalled Chen. “The brain stem is the part that actually controls our breathing, heart rates, any complications in that surgery could render someone comatose. It was very serious.”

“He sounded just as devastated as I was when he was delivering the news. I knew I didn’t have a choice, my life was in somebody’s else’s hands and I just had to hope for the best,” said Cassady. “It was really the worst experience of my life, but having Dr. Chen there and his positivity, really made it a lot easier.”

After two brain surgeries, and a procedure placing a shunt in the fluid filled cyst, Cassady’s symptoms disappeared. He underwent years of physical therapy and occupational therapy, and struggled to overcome severe double vision.

“So, when I realized I was stable, I decided I wanted to do something that impacts society, and looking back at what I had been through, nobody impacted me more than Dr. Chen, so I decided to apply to medical school,” said Cassady.

He applied to the University of Minnesota, in part because Cassady is a Twin Cities native, and in his application, he detailed Chen’s impact on his life. What Cassady never expected, is that Chen would be recruited to the U of M to lead the neurosurgery department, or that the two would reconnect in that chance encounter on Washington Street.

“It is really neat for me. He was my entire inspiration for going into medicine, to see him here, it's really special,” said Cassady.

“It really feeds into my belief that nothing happens randomly, that there is a reason for everything, there is a reason I am here in Minnesota and there is a reason he ran into me,” said Dr. Chen. “I told John: you are an example of what modern medicine can do for patients, we can make you whole again and cure you of your disease, we could make your dream possible.”

Cassady now has a family of his own, with two young children, and Chen remembered Cassady’s girlfriend, now his wife.

For Chen, Cassady’s story renews his own calling in medicine, and he believes Cassady’s experience will help him inspire other patients undergoing difficulties.

“Every single one of my patients sustains me in a different way. John will continue to inspire me to do what I do, and I hope that inspiration will carry over to other medical students, practitioners and our patients,” said Chen.