Medical professionals and patients with chronic health conditions say a proposal to require able bodied adults to work in order to qualify for Medical Assistance coverage will cause thousands to lose insurance. 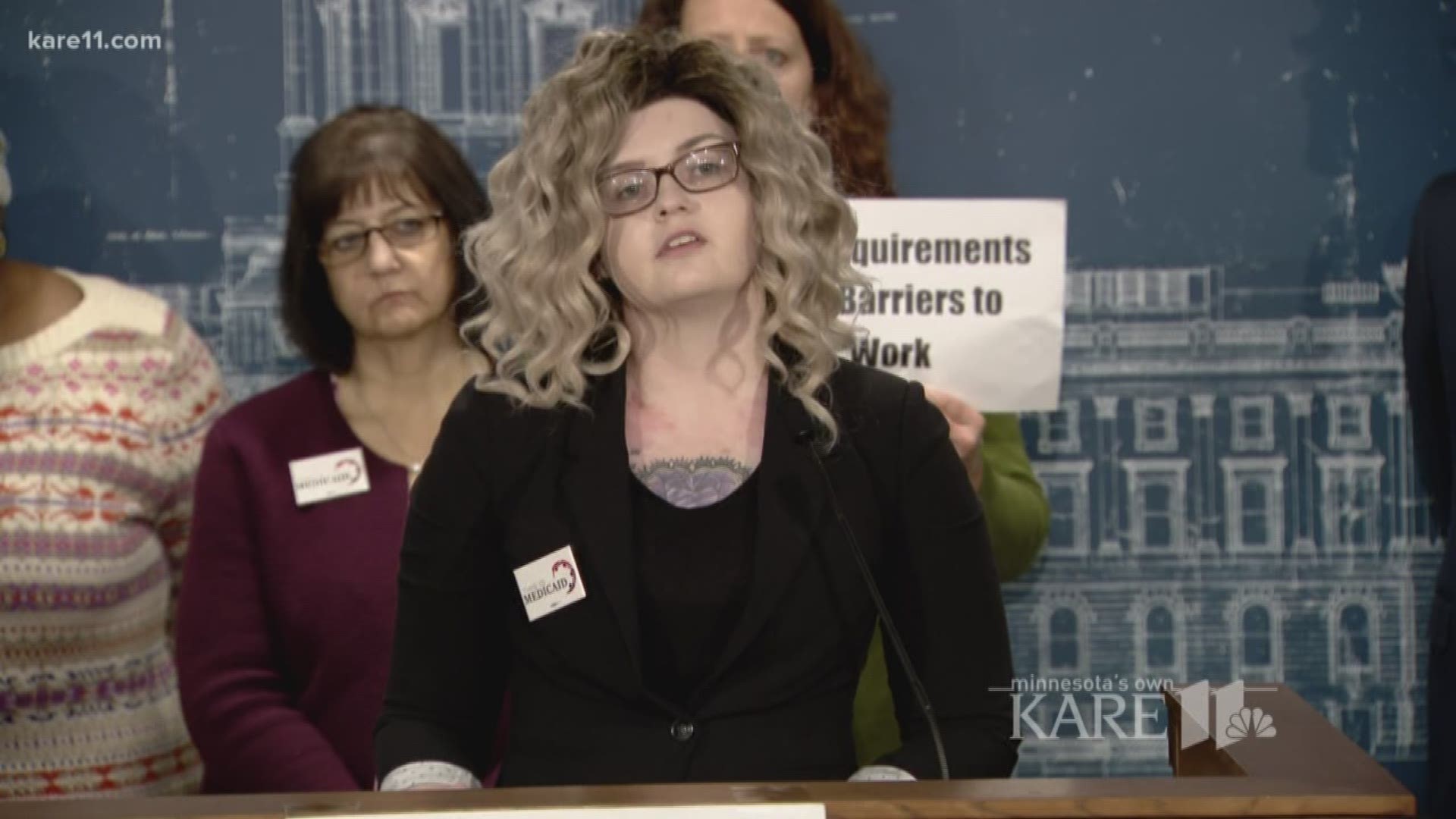 ST. PAUL, Minn. -- Medical professionals and patients with chronic health conditions say they're worried about a proposal to add a work requirement for some recipients of Medicaid, or Medical Assistance, as it's known in Minnesota.

The Republican legislation, which is moving its way quickly through the committee process, would require able-bodied adults who aren't caring for small children to have jobs or be seeking jobs, or be enrolled in job training programs to keep their health coverage.

Dr. David Hilden, MD, of Hennepin County Medical Center said many patients don't have a certified disability, a federal designation that is very difficult to obtain, and yet are battling chronic health issues that vary greatly from day to day.

"People with chronic medical, mental and substance use disorders, are literally on a cycle of recovery," Dr. Hilden explained at a State Capitol press conference.

"A cycle from which they can attend to their medical needs in the form of follow-up visits, day treatment, support services for addiction, counseling, assistance with medications. A work rule will disrupt that cycle of recovery."

Hilden said it would be degrading and demeaning to patients for doctors to make a monthly determination about whether these patients are fit for employment. He estimated 40 percent of HCMC's patients, roughly 30,000 people, would be affected by the proposed change.

He predicted that, as people drop off of coverage, hospitals would be strapped with rising uncompensated costs.

St. Louis County Commissioner Beth Olson said that the job of enforcing the work rule would place another burden on county workers who already are struggling to verify eligibility for other public assistance programs.

"We would need to hire at least 30 workers, which would be at the cost of $2 million to our county taxpayers," Commissioner Olson remarked.

"The irony really truly is not lost on me that the very people that need help from medical assistance are also the people that we’d be putting their housing at risk, by raising their property taxes."

Reporters also heard from Sheyla Jensen-Boyce, a Minnesota National Guard member and student at Minneapolis Community and Technical College, who is recovering from Hodgkin Lymphoma.

She said her struggle with cancer was aggravated by her battle with her private insurance companies to cover the cost of her care, but that ended when she qualified for Medical Assistance through the state.

Jensen-Boyce says she does work 35 hours per week in a work-study job, but also knows that's not always possible for people who are severely ill and yet not officially designated as "disabled" under law.

"I can only imagine work requirements being another bureaucratic nightmare for people like me who want to succeed, and I’m doing everything I can to build a better life," Jensen-Boyce asserted.

"I don’t have time to be evaluated for an exemption or provide proof of income when my life is on the line."

More than 100 organizations have joined the This is Medicaid coalition, to speak out against the bill.

Dr. Hilden noted that Medicaid is funded primarily by the federal government, with less than 10 percent of the cost picked up by state taxpayers.

Republicans call the proposal a win-win, because employers are having a tough time finding enough people to fill openings in the current economy.

"Our goal is to move people out of poverty, not to leave them trapped just because they’re safer," said Sen. Michelle Benson, a Ham Lake Republican who heads the Senate Health and Human Services Policy Committee.

"We want people to achieve their full potential."

They point out that a similar work rule already applies in Minnesota to people enrolled in nutrition programs and public assistance programs targeted to children living in poverty, known as SNAP and TANF.

"We’re aligning with existing work requirements because our goal is not to unduly burden county eligibility workers," Sen. Benson said.

"This is going to eat the state budget," Rep. Daudt explained. "Those growing budget numbers are going to simply mean we can’t afford to take care the people that really need these programs. We want to do is protect these dollars for the people that need them the most."

Arkansas, Indiana and Kentucky have already imposed such rules, and seven other states have applied to the federal government for permission to move to that system.

"This is about bringing more jobs in Minnesota, to move people out of poverty," Rep. Kelly Fenton of Woodbury remarked. "This is not meant to be punitive."