Starting January 1 all of the trash collected in Ramsey and Washington Counties will be taken to a recycling center, and what can't be recycled will be burned for energy. In the past only part of the garbage from those East Metro counties had gone to incinerators. 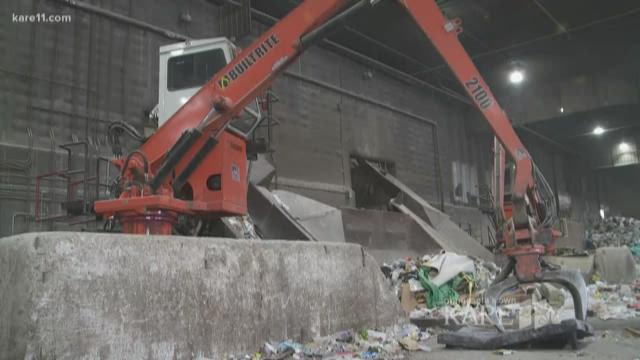 Beginning January 1, all trash picked up in Ramsey and Washington Counties must go to a recycling center owned by the counties. And what can't be recycled will be burned to generate energy.

Until now, only part of the trash from those two counties was shipped to Xcel Energy incinerators that convert waste to electricity. But in 2018 garbage haulers in those counties will be required to bring all of their trash to the recycling center, and take none to landfills.

"From a carbon perspective, and looking at what happens to that carbon that's in the trash, it's a far better use of this material," Zack Hansen, Ramsey County's Environmental Services director, told KARE.

"You're recovering more of that carbon in the form of energy than if it were going into a landfill, even compared to landfills that collect gases coming from buried trash."

Ramsey and Washington Counties purchased the Recycling and Energy Center in Newport in 2015 to control costs and pave the way for more innovation in handling waste.

But the rate that trash haulers are charged will increase in 2018, and they will pass that along to customers. Hansen predicted the average household will pay an additional $7 per year.

"The tipping fee is going up 10 percent, or $7 dollars, and that's because our costs have increased over time. It's still less than the private owner had been charging back in 2014 before we purchased it."

A 1989 state law mandates that municipalities follow a "waste disposal hierarchy." Reducing waste is the first goal, followed by recycling and composting, followed by waste-to-energy options and finally burying trash in landfills as the last resort.

After the metal recyclables are pulled out of the waste stream at the Newport plant, the remaining trash is converted to RDF, or Refused Derived Fuel. It's a loose assortment of garbage cut into smaller pieces that can be shipped to Xcel Energy plants in Mankato and Red Wing to be burned for energy.

"We're following what we believe the state requires the east metro area to do, but more importantly we're doing this protecting the environment and for local economic development, for thousands of jobs that recycling and processing wastes creates in the East Metro area," Hansen explained.

There's a downside for some Dakota County residents and refuse haulers.

Because the recycling center in Newport will be taking on more garbage from Ramsey and Washington Counties, it will no longer accept trash from Dakota County.

Willie Tennis of Tennis Sanitation in St. Paul Park said his drivers will have to take trash they pick up in Dakota County to landfills or other waste transfer facilities. Tennis said he originally supported Ramsey and Washington County's takeover of the Newport recycling center, based on the understanding he would always be able to use it.