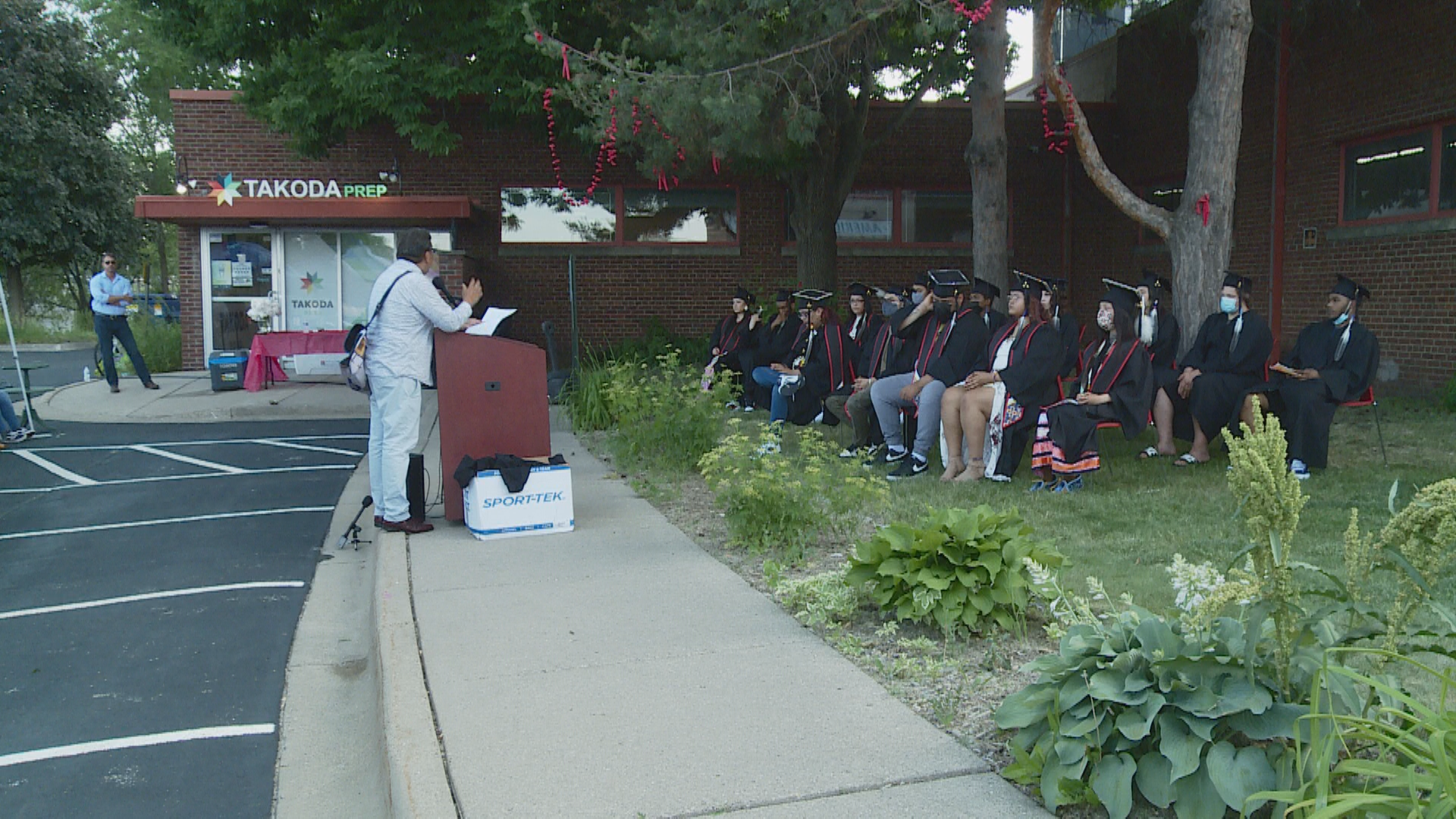 The pandemic forced her graduating class into distance learning at times, with a particularly bleak winter period.

"I was real behind. I wasn't gonna graduate this year," Murillo said. "I was gonna drop out. But I couldn't. I just couldn't."

Reginald Cartharn Jr. faced the same challenges at Takoda, a school immersed in Native American culture but one that serves students of all backgrounds.

He said "a lot of people" told him he would never graduate high school.

"It's taken a lot of perseverance," he said. "And a lot of integrity, too."

On Wednesday evening, with temperatures running well into the 90s, Cartharn and Murillo joined more than a dozen fellow students at an outdoor graduation in the school parking lot. With family and friends cheering and applauding, this senior class of 15 – double last year's total – proved their resilience and set themselves up for a bright future.

Murillo, who said her father was deported out of the country when she was 12 years old, became just the second high school graduate in her family.

"It's a special moment," Murillo said. "I just have to believe in myself. My mom, she told me that anything I put my mind to, I can do. And I just have to trust that process and not give up on myself."

When he received his diploma for the first time, Cartharn broke into a wide smile.

"I'm holding it!" he said. "This is a big moment for me, because... I never doubted myself. That's one thing I never did."

Credit: KARE11
Reginald Cartharn Jr. graduated from Takoda Prep on Wednesday night. "I'm holding it!" he said as he received his diploma.

Neither did Christy Irrgang, the education director at Takoda Prep. During her speech to the graduates, she called the Class of 2021 "some of the strongest people I know," and told them "you will change the world."

Irrgang said it's the largest graduating class she has seen at Takoda since she arrived.

Congrats to the Class of 2021 at Takoda Prep in South Minneapolis — an alternative high school within the division of the American Indian OIC. With 15 graduates, this class is double in size from last year and one of the largest in recent memory. @kare11 pic.twitter.com/wEqHTq2xGV

Murillo said she wants to embark on a career that could help her incarcerated brother.

"I want to go to law school," she said, "so I can become a lawyer or something."

Cartharn has planned out his own path, too.

"I want to be an architect. I want to build my dream house, and I want a business of my own," he said. "I want to be a successful, young Black man, and I'm proving it to be right now."