Love Them First: Ben and Lindsey on Lucy Laney documentary

Lindsey Seavert and Ben Garvin tell the story behind their film, "Love Them First." 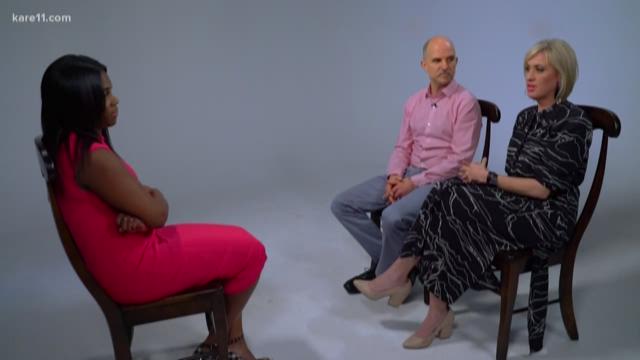 GOLDEN VALLEY, Minn. — Lindsey Seavert was on the biggest assignment of her life: bed rest.

It was critical if she wanted to meet her second child and only girl, Phoebe.

And while she did what any mother would, Seavert also focused on telling the story of children miles from the hospital she called home for six weeks.

“As I sat there and stared at these hospital walls I thought, 'If I can get the baby that I have dreamed of, I want to go back and do work that serves her well and serves children,'" she said. “As the daughter of teachers, I’ve always felt compelled to share stories of education. I just wanted my work to align more with my heart and the position I was at in my own life, having a child entering the Minneapolis Public Schools and having a new baby on the way.”

Prior to her bed rest, Seavert  shared a story with KARE 11 viewers about the shooting death of a 2-year-old boy near Lucey Laney Elementary School in North Minneapolis. That’s where she had her first encounter with the school’s principal, Mauri Melander Friestleben.

“I was covering the shooting death of a 2-year-old boy by the corner of school. He was killed in a drive-by shooting,” she said. “Mauri led each of her students out to that corner and they formed a peace circle. She had some compelling thoughts about that we should not normalize this gun violence in this neighborhood. I think she spoke with such a ferocity of love for these students as a protector, defender and disruptor. I thought to myself, this is unlike any principal I have seen before.”

Seavert couldn’t ignore the nudge inside of her heart. She knew a bigger story was waiting to be told.

And so did her colleague, photojournalist and filmmaker Ben Garvin, who met the same principal on a different assignment, months later.

“(Mauri) was speaking to the students after a shooting in north Minneapolis. She just spoke with such brutal honesty. Not hiding a thing from these children. I found that so refreshing and so inspiring and valuing of a little kid,” Garvin said. “Made me realize she is a force. And I wanted to know more of that. I wanted to be around more of that.”

Together, Seavert and Garvin produced a 90-minute documentary, "Love Them First: Lessons from Lucy Laney Elementary." The two have given us a window into a world that not many see.

Saturday, Love Them First will have its world premiere at the Minneapolis St. Paul International Film Festival. Seavert and Garvin spent hundreds of hours at Lucy Craft Laney Community School to tell their story.

It started as a series from 2017-2018. Coupled with the support of KARE leadership, Garvin and Seavert worked to create a more in-depth and complete story with a feature length documentary.

“We at KARE 11 are deeply proud of this work. Both the news series, but also of this full-length film. We really think it fully tells a very rich and vibrant story of this community," said Love Them First Executive Producer and KARE 11 Director of Marketing Janeen Vogelaar. “Moreover, we are thrilled to premiere this film at the Minneapolis St. Paul International Film Festival and are excited to later broadcast 'Love Them First' on KARE 11 later in 2019.”

With unprecedented access over the course of a year, Love Them First: Lessons from Lucy Laney Elementary follows the determination of a charismatic Minneapolis school principal, Mauri Melander Friestleben, as she sets out to undo history.

Not only does Minnesota have the largest achievement gap between black and white children in the United States, Friestleben faced another seemingly impossible obstacle, with Lucy Laney at the bottom of the state’s list of under performing schools for two decades. Under Friestleben’s leadership, standardized test scores from most black students began rising for the first time, but when the school encounters a heartbreaking setback, Friestleben is forced to confront the true measure of student success at Lucy Laney.

“We hope that we can shine a beacon of light on this school but the larger more pervasive issues in the education system. Maybe we can choose hope a little bit more in that classroom or on that corner,” Seavert said. “I want people to think about choosing love in a school system first. Perhaps before the testing. Every community has a failing school. While this is a local story, it has global reach because those children do and should belong to all of us.”

Garvin and Seavert said this documentary never would have been possible without the trust of the Minneapolis Public Schools and Principal Friestleben.

Garvin added, while filming, there was a bit of trepidation. He and Seavert said they had focus groups and long conversations of what to expose. Garvin hopes the film can become a teaching tool to spark dialogue and conversation, in Minnesota and beyond.

“There is an issue of discipline. Black kids are disciplined three times the rate of their white peers. She has reduced suspensions by 90 percent. How did she do it? What did she do? We show you that in the film. We hope other people can walk away and say, 'Let's try that at our school,'” Garvin said.

Garvin, a father of four, says this project has changed him. Like the title of the documentary, Friestleben believes in leading with love.

“Mauri leads that way and it has been inspiring to be around. It has made me a better father. That is for sure,” he said, adding that he wept during the months of editing. “Editing this film has been an emotional journey for me. I didn’t anticipate that. Things we anticipate that are real and raw and rips your heart out.”

“Mauri feels that we often judge children based on the mistakes or the wayward paths of their parents. And, we should just really love children for who they are. No matter who they are born to, what skin color they have,” she said. “I think I carry that with me no matter where I go. Yes, I've been one of those judgmental people. That is how the film has changed me. I can’t wait to set this little project with big impact, free into the world. I think that this neighborhood has a real opportunity to feel seen and heard in a way that they haven’t before in the Twin Cities and beyond.”

Meanwhile, to stay updated, go the KARE 11 Facebook page or the Love Them First Facebook page, or go to www.lovethemfirst.com. An additional screening has been added for Easter Sunday at 3 p.m. It will take place at St. Anthony Main.

If you can't attend a screening, KARE 11 will broadcast this film in its entirety later in 2019.