Some of the youngest students from SPPS to Anoka-Hennepin will be back for in-person learning in the coming weeks. 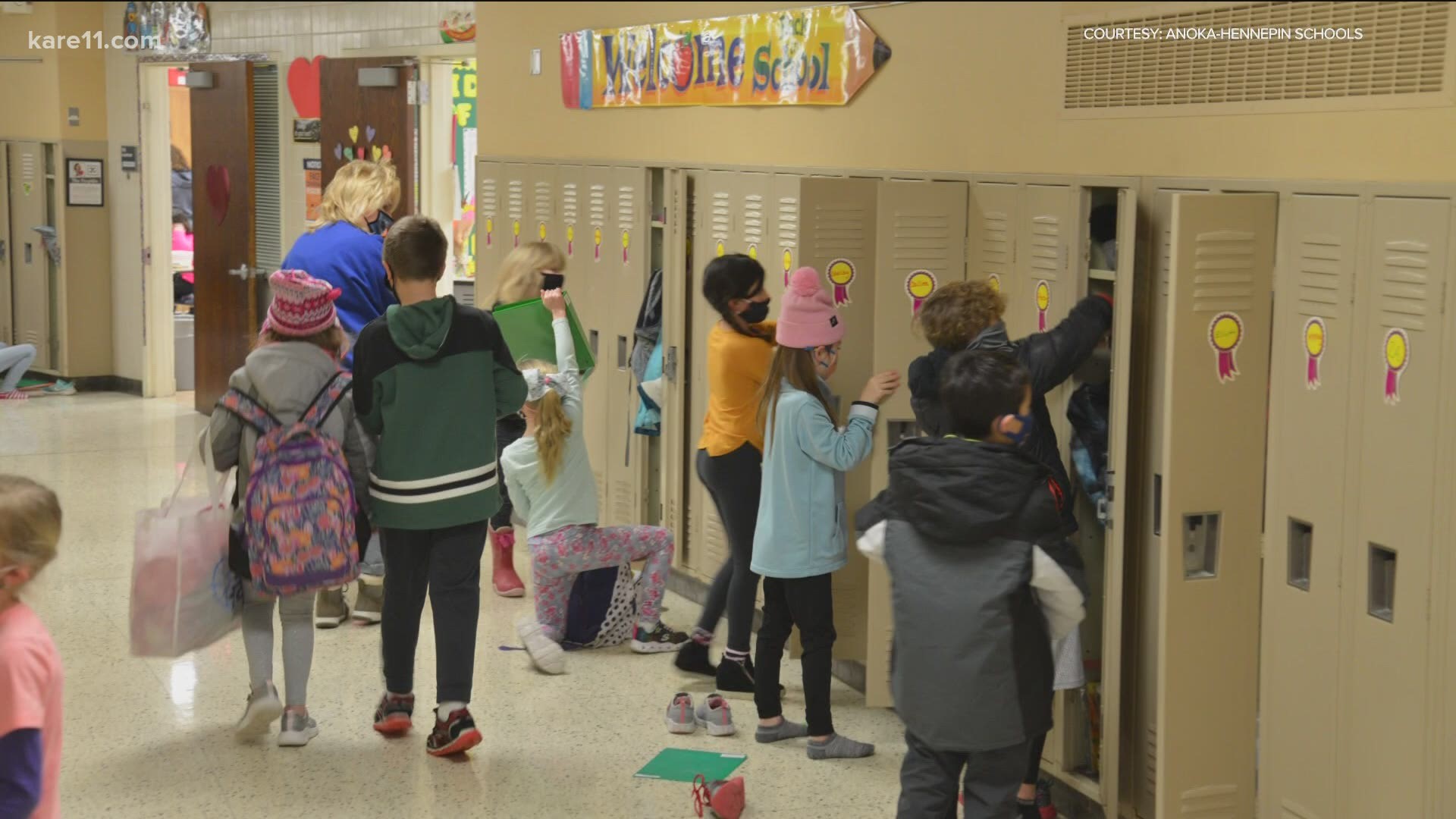 ST PAUL, Minn. — After months of learning at home, some of the youngest students in the metro returned to classrooms on Monday morning.

Saint Paul Public Schools welcomed students Pre-K through second grade on Monday, and more students will return in a second wave on Feb. 16.

Anoka-Hennepin School District is in its third week of being back in person. Students in grades three through five returned to the classroom on Monday. Sixth graders join them on Tuesday for in-person learning in the hybrid model, with ninth graders scheduled to return next on Feb. 9, and remaining grades to follow on Feb. 16.

Anoka-Hennepin Schools Superintendent David Law said principals have been working since December on all the details, from staggering times so hallways aren't as crowded to adjusting who's in the lunch room when.

Law said the district also addressed ventilation concerns, saying, "From October, we used some federal funds to put a higher quality of filtration in our school system which is one of the ways that we could address concerns about ventilation, and that's a big step."

The Minnesota Department of Health started requiring in January that all public schools providing in-person or hybrid learning offer voluntary on-site COVID-19 testing to all staff that interact with students. Anoka-Hennepin Schools had its first round last week, testing about 475 employees. Law estimates that's at least 30% of the elementary staff. The testing is one way of trying to catch any asymptomatic spread.

MDH also said, as of 4:45 p.m. Monday, 14,507 educators had been vaccinated at Roy Wilkins since Thursday. MDH said it's in the process of pulling together a total number, adding it's MDH's goal to get educators vaccinated as quickly and safely as they can.

Teachers in the Minneapolis Public School District were scheduled to return to their classrooms on Monday as well, ahead of the student return on Feb. 8. But over the weekend, a ruling by the Hennepin County Court granted a limited temporary restraining order that allows educators with accommodations to work from home, or those in the process of getting accommodations, to continue doing so.

The debate for and against returning kids to their classrooms has been ongoing since students were sent home last spring due to the pandemic.

Gov. Walz announced that schools could reopen on Jan. 18, but left the details of reopening to the individual school districts. His Due North Education Plan, announced last week, is aimed at supporting teachers and students struggling in distance learning. The plan also fast-tracked COVID vaccines for teachers, with 15,000 Moderna doses administered over the last five days.

Parents and teachers are encouraging their lawmakers not to forget completely about the distance learning model, since it will undoubtedly remain in place in some form for many months. The “digital divide” is still pressing in many districts, as families struggle to keep up with the technological demands.

“It’s been an issue, and it continues to be an issue. It’s not enough. Many parents are having to work at home, with multiple kids at home, trying to access this hotspot,” Khulia Pringle, the coordinator of family engagement and advocacy for the Minnesota Parent Union said. “Some families are taking in other kids, so it’s not just their kids.”

A newly released study from the Centers for Disease Control involving 17 schools in rural Wisconsin, where masks were required, found there were 191 COVID-19 infections. However, only seven resulted from in-school transmission.

The findings are just a small portion of newly-released data the CDC is using to back its claim that schools can and should reopen, as long as mask wearing and proper social distancing is maintained.

RELATED: CDC presents evidence to support a return to in-person learning at schools