Richfield Schools leaders on lunch incident: 'What happened is inappropriate'

As many as 40 students in a lunch line had their hot lunches thrown in the trash and replaced with a cold lunch if they had outstanding lunch debts of over $15. 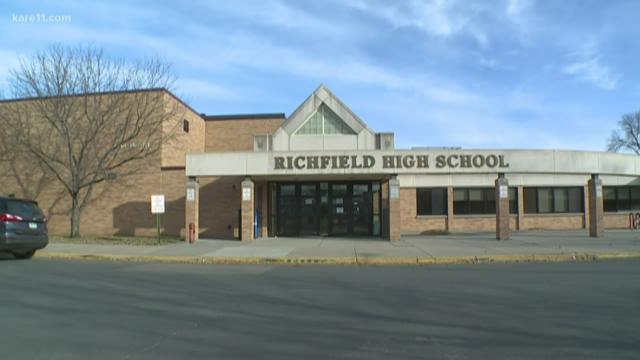 RICHFIELD, Minn — On Monday, during a couple of lunch periods at Richfield High School, a policy was enforced in a very wrong way.

As many as 40 students in the lunch line had their hot lunches taken off of their trays, thrown in the trash and replaced with a cold lunch when a lunchroom staff member at the register saw that they had outstanding lunch debts of more than $15.

“There are multiple failures we had in this situation and our job is to fix it. First and foremost (in) the way we treated our kids. We should never leave kids with the feeling they had from the experience,” Unowsky said.

“One of the things we can do is model failure with grace. We absolutely failed in this situation and our team is working to try and rectify mistakes we made,” Daniels said.

What should have happened was one of two things; first, if a student is in the line with a lunch on their tray, no matter the balance at the register, they will keep it and be allowed to eat it, according to Unowsky.

Their balance would be noted at that point electronically, not verbally in front of others and then a call would go to their parents. The student may then, in private, be approached by a social worker or guidance counselor to figure out what help they might need.

Second, a student with a negative balance would be notified before they get into a lunch line, again, privately.

What happened on Monday, the leaders admit, was a total failure.

And they have apologized to the students and will continue to make sure this never happens again.

But the reality of lunch debt for this district, and others, is very real.

Richfield likely will foot a $20,000 unpaid lunch bill at the end of this school year – and that is with nearly 65% of the students in the district being on free lunch.

Some lawmakers in Minnesota have already inquired there and in other cities about the possibility of bringing up legislation to deal with this growing issue.

MORE BTN: Find it hard to embrace winter? Learn from the Norwegians