The bill is aimed at licensing assisted living facilities and providing immediate protections for seniors, but with just days left in the legislative session advocates worry time may run out before the Senate takes action. 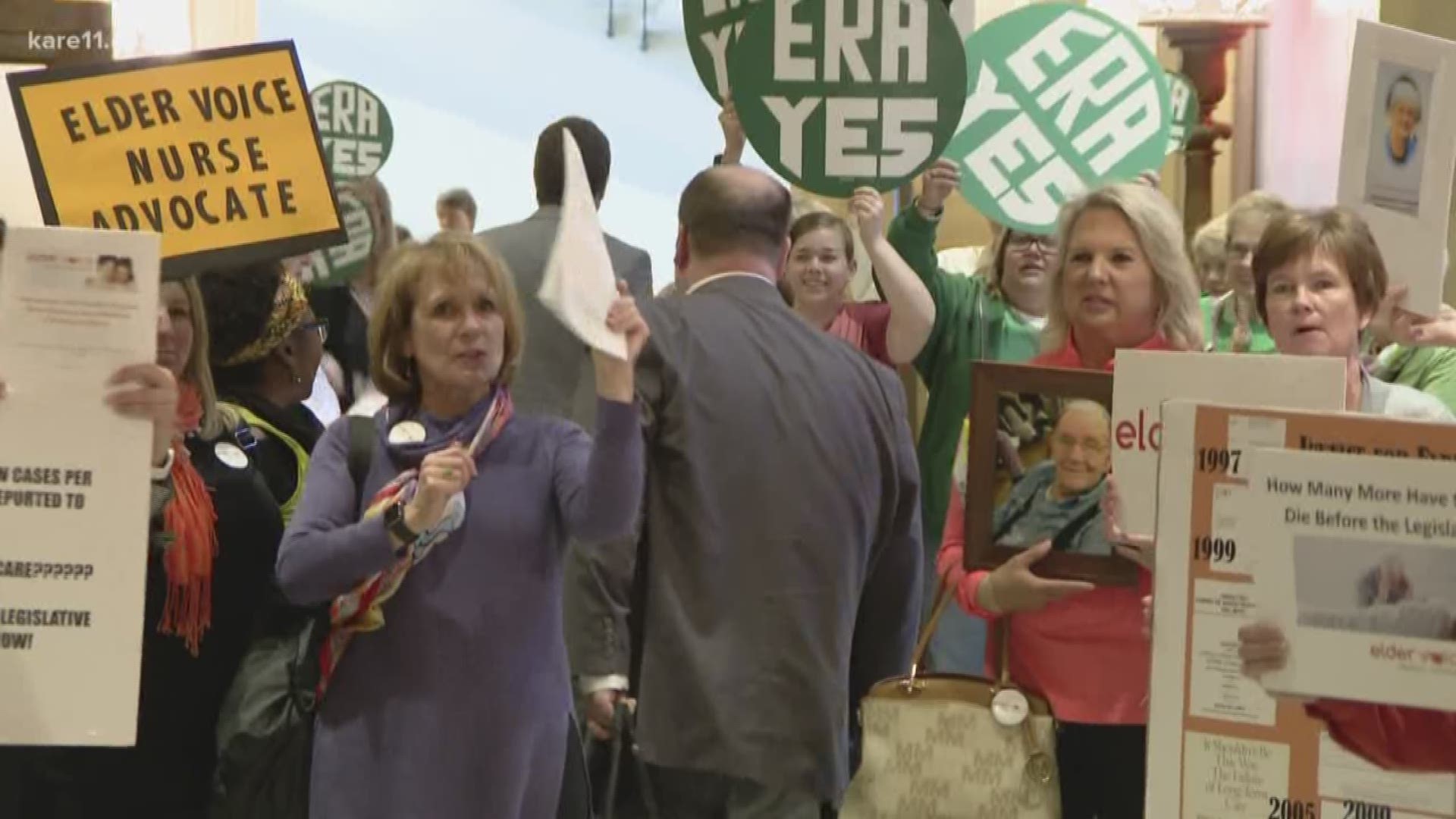 SAINT PAUL, Minn. — The Minnesota House passed a bill Friday that would license Assisted Living facilities across the state.  Minnesota is currently the only state in the country that does not.

But the Senate’s version of senior care reforms was still not scheduled for a vote, concerning advocates who have spent two years fighting for reform.

With just days left in the legislative session, groups like AARP and Elder Voice Family Advocates fear politics could once again thwart efforts to protect seniors.

“What we have to make sure is that the clock does not run out,” said Mary Jo George of the AARP.

Those groups and families of seniors rallied outside the House chamber in support of new legislation.

The families have testified repeatedly at legislative committees, telling painful stories of loved ones abused and neglected in Minnesota’s senior homes.

Kris Sundberg’s dad died at a assisted living facility where no one was checking on him. “My father’s body laid in his room for seven days,” she told a committee.

Debbie Singer’s mom was supposed to get a daily check in at her assisted living facility, but she was found in her room dead for at least two days.  “I was horrified,” she said.

KARE 11 has reported on those and other stories of abuse and neglect. Jean Krause was raped by an assisted living caregiver. Suzanne Edwards was verbally berated and threatened by her caregivers.

Republicans and Democrats both say reforming elder care is a priority.  And yet the two parties and Governor Dayton failed to agree on reforms last year.

Republican Sen. Karin Housley (R-St. Mary’s Point) who has spearheaded efforts in the Senate says it’s still a priority – even though as of Friday the Senate has yet to schedule a vote.

“Seniors do deserve to have these provisions passed,” she said.

What are the key sticking points?

First, the two sides are still far apart on how much funding is needed to begin licensing assisted living facilities. The House plan includes millions of dollars more.

Second, Republican senators strongly oppose changes to the law that would make it easier for seniors and their families to sue facilities.

Still, Housley believes elder care protections will pass. “We will get assisted living licensure. We will get cameras in the room. And we will get proper funding to do it,” she said.

The AARP and Elder Voice back what they call a stronger version of the bill that passed the House.  But they say they want both bills to get a vote, fearing if they don’t, for a second year in a row budget battles will leave seniors unprotected.

Asked who will take the blame if efforts die, Mary Jo George with AARP said, “I hate to say it, but I do think the Senate really, a lot of this rests on the Senate.”