Minnesota Hemp Farms is the first approved industrial hemp grower in the state, and the largest producer of hemp products in Minnesota. 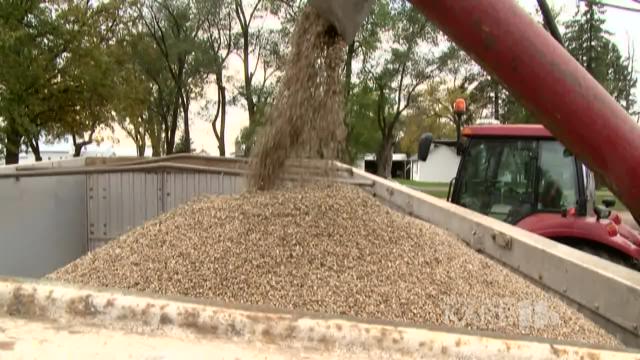 Strohfus began with 18 acres of hemp as part of a state pilot program in 2016. This harvest, he helped plant a majority of the 1,200 acres of hemp now across Minnesota, and over the year, he's launched a hemp food product that has hit store shelves.

“Hemp is not marijuana, that’s probably the tag line,” said Strohfus, who said he is still working to overcome the stigma of the plant.

Hemp and marijuana are both part of the cannabis family, but hemp lacks THC, the chemical that creates a high.

Minnesota banned hemp production when it was swept up in the federal drug ban six decades ago, but the 2014 passage of a federal farm bill and state legislation in 2015 paved the way for the industry’s renaissance.

Now, more than 30 states have passed similar legislation, and just this week in Wisconsin, a committee of GOP lawmakers held a public hearing on a bill that would allow farmers in Wisconsin to grow hemp.

Strohfus recently left a nearly two-decade IT consulting career to focus on Minnesota Hemp Farms full time. He began his operation as one of seven farms participating in the Minnesota Department of Agriculture's industrial hemp pilot program and works in conjunction with many of the hemp farmers across the state.

The growth comes with the launch of Strohfus’ new product, Field Theory, a brand of hemp seeds and hemp hearts. High in Omega 3s, the hemp health food can be eaten as a snack, or as a superfood or protein to add to items like cereal, yogurt, salad and smoothies.

Each part of the plant is valuable. The leftover stalks from crops are sent off to be processed and made into fiber. He’s also developing a farm-to-school program, working with school districts to use hemp in recipes.

“Which are helping people with anti-inflammation, Lyme disease, restless leg syndrome and lot of things yet to be discovered about the benefits of hemp extract and CBD oil,” he said.

For further proof hemp has staying power after a six-decade absence, Strohfus is deep into plans to build a hemp processing facility.

“Minnesota is considered the Wall Street of food innovation in the U.S.,” said Strohfus. “It's a renaissance of hemp production and ending of prohibition, so there is a lot of excitement around it.”

To learn more about his hemp products, now in Kowalski’s, several co-ops, or online, visit this website.