The Champlin, Minnesota, family whom the Tonight Show host visited for a "Minnesota dinner" shares the story of the comedian's visit to their home 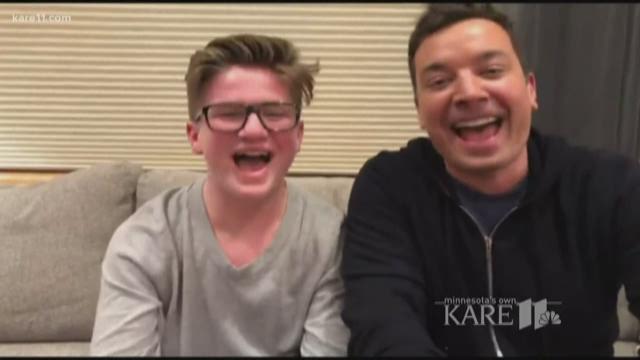 CHAMPLIN, Minn. - It was the Facebook Live that made every other Minnesota family jealous.

"We jumped and screamed and ran to the door," said 13-year-old Charlie Salzer.

The Salzer family, Joel, Marylou, Charlie, Claire and Will, won a contest to host Jimmy Fallon for a Minnesota dinner.

"The cheese. Got to have the cheese on there," said Joel Salzer.

Some people wondered whether the Salzers knew Fallon was coming. Their table was set and they had a gift ready for him. Actually, the show's producers told them they were finalists and to be ready just in case.

"I'm hoping there really weren't four other finalists, because that would be the crappiest feeling – I'd feel bad!" Joel said.

Fallon snacked on the couch and focused on the three kids. Part of the reason they got picked was that the Salzers sent in a video of Charlie and a friend doing an old Fallon SNL skit.

The Tonight Show host and the 13-year-old re-enacted it.

Fallon brought gifts and the big prize: tickets to his Minneapolis live show after the Super Bowl.

All weekend, the Salzers were local celebrities, constantly recognized by strangers.

"They call me the Jimmy Fallon kid," Charlie said.

That should be "hot dish girl," as Jimmy Fallon now knows. The Salzers sent him out the door with left-overs.

Of course, after a long Minnesota goodbye.

"Walked him out to the car. Hugged him before he got into the car," said Marylou Salzer.

"He like stuck his body out the window and said, 'I got the hot dish,' and everyone was cheering," Claire said. "It was really cool."

Fallon didn't actually sit down at the dining room table, but he stayed for 20 minutes after the camera turned off. And the Salzers say he was the same nice, funny guy the whole time.

Put the minced onion in a skillet over medium heat. Add the ground beef and sauté until cooked and onions translucent.

Grease 9x13 Pyrex pan. Pour the cooked meat and onions into pan. Mix together the soup, corn and milk and spread evenly over the top. Sprinkle on the cheddar cheese.

Place the tater tots on top of the mixture in straight lines.

Bake for 30-40 minutes until tater tots are golden brown and crisp.