Despite having some 400 cows and 16 employees at his dairy farm near Dundas, he has struggled to break even for several years now. 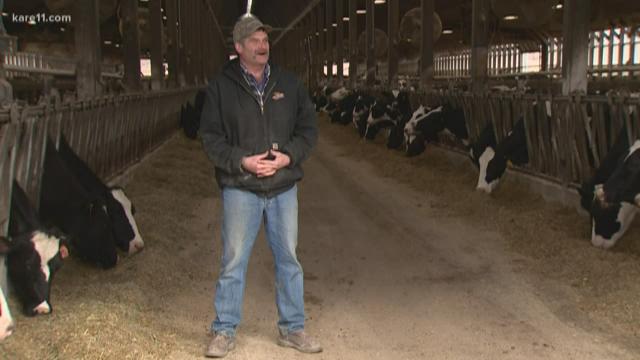 Paul Liebenstein hasn’t run a dairy farm for 42 years, just for the money, but he knows money could run him out of the business.

"I think being a farmer is probably the greatest profession you could have, but this has kind of taken the fun out of it,” Liebenstein said.

Despite having some 400 cows and 16 employees at his dairy farm near Dundas, he has struggled to break even for several years now.

"This has just been going on for so long that it's like bleeding to death with small nicks,” Liebenstein said.

He’s not alone. Minnesota’s median farm income was just $26,055 thousand dollars last year, according to a yearly report by compiled by the University of Minnesota Extension and agricultural Centers of Excellence within Minnesota State.

According to the report, participating producers represent about 10 percent of Minnesota’s commercial farmers.

"We've been tracking this data since 1996,” said Dale Nordquist, with the University of Minnesota. “This was the lowest, median income year we've seen over that 23 year span, when we adjust for inflation. It's really, really a tough situation and, not only that, it's the sixth straight year of low incomes."

The report found all types of farms have been impacted. Crop producers had a median income under $31,000 in 2018. Median pork production was about $28,000, while median beef production was slightly more than $6,000. The median dairy farm earned less than $15,000.

"That doesn't hardly pay for your health insurance,” Liebenstein said. "It all kind of wears on you over time."

Last year 15% of Minnesota dairy farms had enough, choosing to liquidate their herds and close down.

For those sticking it out, the worry will remain.

"We're having to tell our younger, our next generation, that this isn't going to work and we don't have room for you, we can't expand for you,” Liebenstein said. “I don't think that's really where everybody wants it to go, but that's what is happening."

The U of M report shows a wide disparity in incomes. The top 20 percent of farmers earned an average of $184,000 last year, while about 35 percent of all farmers were not able to turn any profit. One bright spot for everyone is that the price of farm land remains strong, saving many from losing too much net worth.