Vaccines are expected to be delivered to 636 predetermined locations nationwide within the next 24 hours, and then distributed to Minnesota hospitals this week. 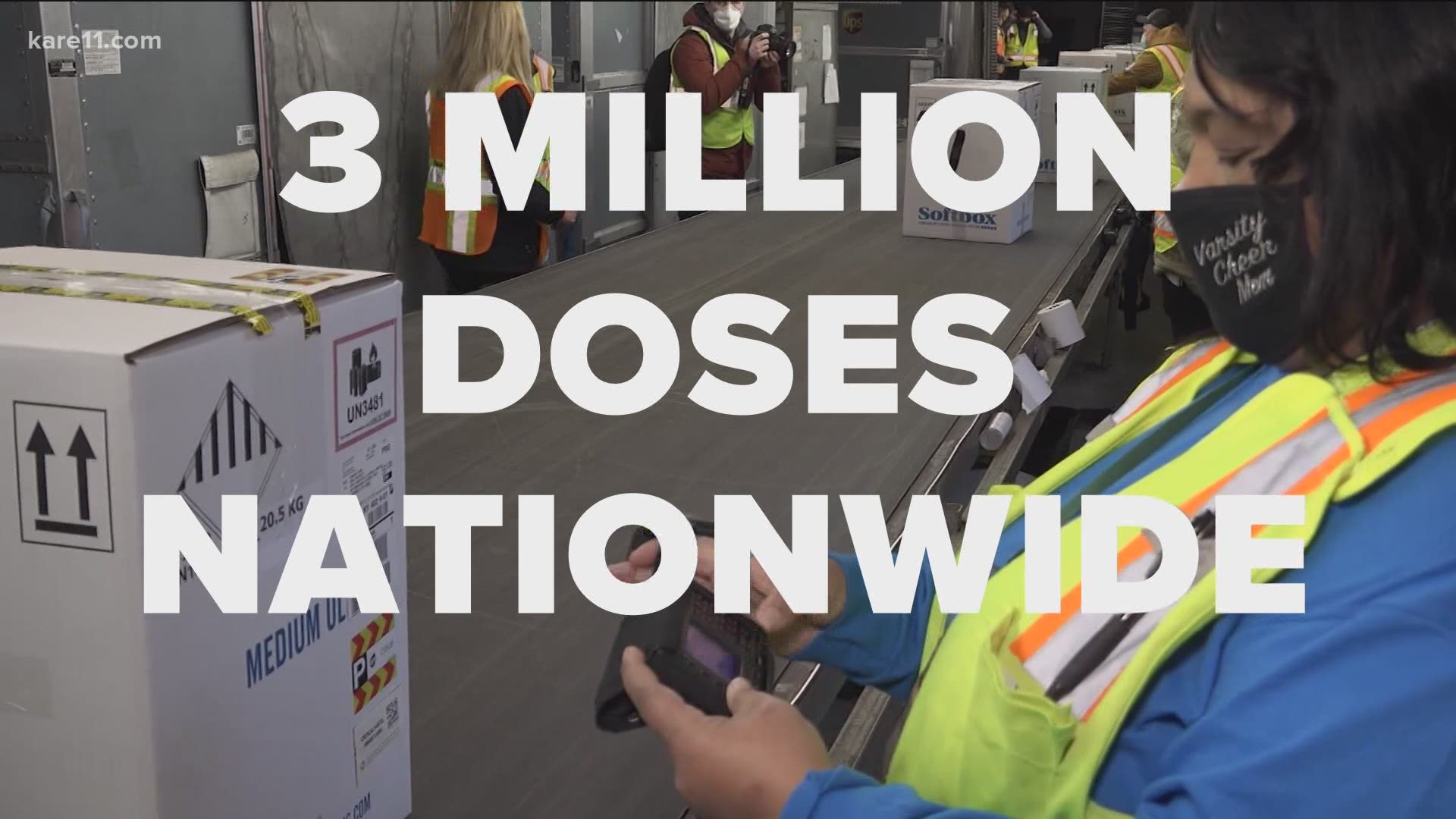 Governor Tim Walz was on hand as the driver tracked the shipment numbers and made sure the temperature of the shipment was where it needed to be.

"It's here, it's safe and it's ready to go," Walz told reporters about the shipment, which he believes is the first to arrive at it's Minnesota destination.

Credit: STAR TRIBUNE
Minnesota Gov. Tim Walz crouched down to look at the box containing 2925 doses of the Pfizer COVID-19 vaccine delivered Monday morning by Seth Warnecke, with FedEx, to the Minneapolis VA Hospital. ] AARON LAVINSKY • aaron.lavinsky@startribune.com The Pfizer COVID-19 vaccine arrived in Minnesota the morning of Monday, Dec. 14, 2020, with 2925 doses delivered to the Minneapolis VA Hospital. Minnesota Gov. Tim Walz was there to greet the FedEx truck as it arrived.

The governor said the state conducted some dry runs a couple of weeks ago to make sure sites were ready to accept and care for the vaccine.

"I think probably within the next 24 to 48 hours they'll (The VA) set the protocols, there's a real tracking of when you get it, you can't do everybody on the same day in case there's side effects," Walz explained about the process to vaccinate both workers and patients. "This is happening simultaneously across the country, this is a pretty amazing endeavor."

With the Pfizer vaccine recently approved by the FDA, Minnesota Department of Health (MDH) Infectious Disease Director Kris Ehresmann said the next step will be waiting for guidance from the Advisory Committee on Immunization Practices, also known as the ACIP.

According to the chief operating officer of “Operation Warp Speed,” the vaccines are expected to be delivered to 636 predetermined locations nationwide within 24 hours.

In a press briefing on Monday afternoon, Ehresmann said that 46,800 units of vaccine are expected to be received across the state this week. Those will be sent to larger regional health care systems, which MDH is referring to as "hubs." From there, MDH will be using a "spoke-and-hub" model, where these larger "hub" sites will send the vaccine on to smaller hospitals and clinics, referred to as "spokes," where providers will administer the vaccine.

Ehresmann said MDH is preparing to train providers on how to administer the vaccine safely.

“What we are doing this week is a provider training that goes on,” said Ehresmann. “It’s starts tomorrow, it’s from our team,” she said. “It’s a 20-page guidebook for those who are vaccinating, Pfizer is doing storage and handling training all week.”

Ehresmann also clarified Monday afternoon that the Veterans Administration, the Indian Health Service, the Department of Defense, the Board of Prisons and the State Department are five channels who will be receiving vaccine directly from the federal government, and are therefore separate from the Minnesota allocation.

"They are on a completely different world, if you will, for vaccination," she said. "So when we talk about vaccination starting, we're talking about the providers in Minnesota that are not part of those five federal systems. So our training is for them and the plan for vaccination is for them. These other entities are separate from us, they order their vaccine separately."

In Phase 1 – Gov. Walz announced the vaccine will go to frontline healthcare workers. “Also the aides, housekeeping, the dietary staff,” she said.

Long term care facilities are also part of the first phase. “That would include the healthcare workers that work there,” said Mary Turner, with the Minnesota Nurses Association. “That’s a huge area, that I hope they are allocating a huge chunk of those vaccines for.”

With close to three million doses expected to be distributed nationwide, Ehresmann said vaccinations can start as soon as training is completed. “Our goal is a safe vaccine for Minnesota,” she said.

Governor Tim Walz said more than 180,000 vaccines could be available by the end of the year in Minnesota.