At least five states have adopted the measures allowing for police to remove weapons or prevent gun sales, under what are often called "extreme risk protection orders." 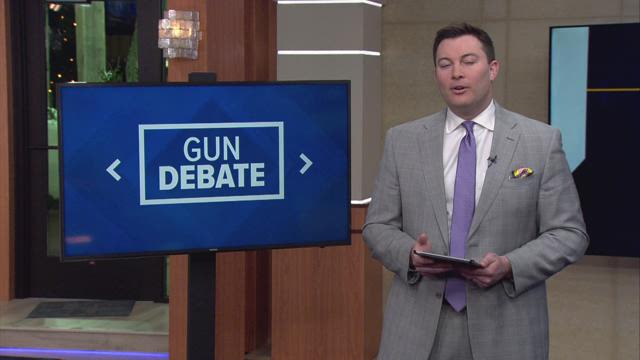 BLOOMINGTON, Minn. – In the wake of the Parkland, Florida school massacre, lawmakers and law enforcement officials are rekindling a proposal that would restrict access to guns from individuals deemed dangerous to others or themselves by a civil court.

Gun violence protection orders (GVPOs) would allow family members or police to petition a civil judge to restrict a person's access to guns in extreme circumstances.

“It's that tool you need to try and separate that person in crisis from the guns that could be used to harm themselves or others,” said Potts. “That legal tool doesn't exist today under the current law, and this would give us that.”

At least five states have adopted similar measures. Legislation is pending in Congress urging states to adopt more of the provisions. President Trump and Florida Gov. Rick Scott have each said they will review gun restrictions in an effort to keep weapons out of the hands of the mentally ill.

But gun rights groups typically oppose the measures for hindering access to and ownership of guns. Connecticut has the option to request an emergency court order, but it didn’t prevent the shooting spree at Sandy Hook Elementary School in 2012.

And the adults who brought the alleged Florida gunman into their home said they didn’t realize he could be violent.

Nikolas Cruz, 19, is charged with murdering 17 people at a Florida school he used to attend with an AR-15-style rifle he bought legally. He has a history of mental-health issues, according to public defender Melisa McNeill.

The court orders adopted in Connecticut, Indiana, California, Washington and Oregon generally allow requests to judges to order the removal of firearms from someone determined to be a threat before they commit violence.

"Like so many others that came before it, this tragedy was avoidable," said Avery Gardiner, co-president of the advocacy group Brady Campaign to Prevent Gun Violence. "It's time to change the conversation about guns in America, and that starts with each one of us asking hard questions and demanding accountability from our elected officials.”

Florida doesn’t have such a law, but even if it did, somebody would have had to request that Cruz's guns be removed.

Cruz was living at a friend’s house after his mother died Nov. 1. The friend’s parents, James and Kimberly Snead, told the Sun-Sentinel newspaper in Fort Lauderdale that they were aware Cruz had the rifle and other weapons in a locked cabinet in their home, but not that he was violent.

“We had this monster living under our roof and we didn’t know,” Kimberly Snead told the Sun-Sentinel. “We didn’t see this side of him.”

Connecticut pioneered what are called extreme risk protection orders in 1999, the year after a man who had been treated for attempted suicide and depression killed four co-workers at the Connecticut Lottery Corp. with a gun and a knife before shooting himself to death.

The Connecticut law allows police to obtain a court warrant to remove guns from people who pose an imminent risk to themselves or others. Evidence of probable cause includes recent acts of violence or cruelty to animals.

The law led to gun removals in 762 cases from 1999 through 2013, according to a study in Law and Contemporary Problems. Police removed guns in 99% of the cases, an average of seven guns for each warrant subject, the study showed. About 12% of the subjects received treatment from the state Department of Mental Health and Addiction Services in the year before their gun seizure, but 29% received treatment the year after.

About half the cases were reported by an acquaintance of the person, mostly family members, employers or clinicians, and the rest were reported by people who didn’t know the person, according to the study. Reasons for the intervention were diverse, including anger between intimates, distress over finances or sadness in old age.

But the law only works if someone intervenes. It didn’t prevent a gunman from killing his mother and 26 people at Sandy Hook Elementary School in December 2012 before killing himself.

A state report in 2014 found the gunman suffered from depression, anxiety and obsessive-compulsive disorder, but that those ailments had “neither caused nor led to his murderous acts.”

The Indiana General Assembly adopted its law in 2005, allowing police to seize weapons from a person considered "dangerous." The definition of dangerous included someone who has a mental illness controlled by medication but doesn't take the medication.

The law followed the shooting death of Officer Jake Laird by a man who went on a rampage with a rifle and two handguns and who had been taken to a hospital months earlier for an emergency detention.

California’s Legislature agreed in 2014 to allow a family member or intimate partner to directly ask a court for what is called a “gun violence restraining order.”

Starting July 1, 2016, California courts could issue 21-day restraining orders to prevent someone who poses a significant danger to himself or others by buying, owning or possessing a firearm.

The law was approved months after the shooting and stabbing deaths of six students and injuries to 13 others at University of California Santa Barbara. The family of the gunman, who killed himself, had sought help for his strange behavior before the shootings.

Washington state voters adopted their legislation for extreme risk protection orders by ballot initiative in November 2016. The law allows police, child-welfare agencies or relatives to ask a judge to remove guns from someone considered a risk for violence for up to a year, with extensions possible.

Marilyn Balcerak sponsored the initiative after her mentally ill son legally bought a pistol and then killed his stepsister and himself.

A legislative analysis of a similar bill that was unsuccessful in the state House in 2016 estimated 868 requests for orders could be filed each year in state Superior Court.

The Oregon Legislature adopted its law for extreme risk protection orders last year after the shooting deaths of nine people and injuries to eight at Umpqua Community College in October 2015.

Gov. Kate Brown testified in April 2017 that an expedited court hearing is the best way to ensure guns are kept out of the hands of people at risk of harming themselves or others, while still ensuring their rights.

Statements submitted for the Oregon debate revealed strongly held positions on both sides.

The Firearms Policy Coalition opposed the bill for threatening to confiscate a person’s legally obtained guns based on hearsay.

Gaither Everett of Medford opposed the bill as “another outrageous assault on liberty, private property and due process.”

But relatives of people killed by guns and victims rights groups supported the bill for protecting people from grave harm.

Oregon Physicians for Social Responsibility said evidence from other states suggests the legislation could save lives from domestic violence or suicide.

Jenna Yuille, who grew up in Oregon and worked for a violence-prevention group founded by Rep. Gabrielle Giffords, D-Ariz., described losing her mother to a shooting in 2012 and her father to suicide by gunshot four years later.

“Let’s give other families an effective way to do something for their loved ones who they know are struggling,” Yuille said.

In Congress, Sen. Dianne Feinstein, D-Calif., and Rep. Salud Carbajal, D-Calif., propose to allow states to use federal grants to craft similar legislation, but they haven't had hearings. Their goal is for state-level bills to temporarily block people with severe mental illness from buying a gun from a federally licensed dealer and to develop a court process to temporarily remove guns from risky people with severe mental illness.

“In the days since the Parkland shooting, Republicans have said friends, family and law enforcement should have done something about the shooter’s behavior. But in most states, there’s no legal avenue for families who have concerns about their children accessing guns and carrying out attacks," Feinstein said Wednesday. “We need a legal process for loved ones and police officers to go to court and get an order to prevent dangerous individuals from buying guns."