Former players weigh in on the future of football

The game is at a crossroads. TV ratings are down, concern over injuries is growing and youth participation has declined. KARE 11 asked, what will football look like in 20 years? 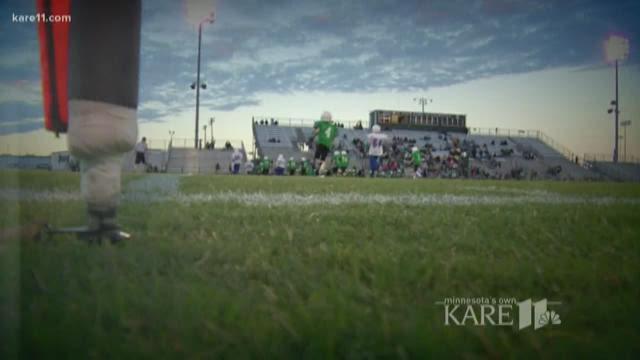 MINNEAPOLIS – In sports today, football is king. The Super Bowl is a spectacle drawing visitors and viewers from around the world.

But the game is at a crossroads. TV ratings are down, concern over injuries is growing and youth participation has declined. KARE 11 asked, what will football look like in 20 years?

At an NFL event at Shakopee High School just days before the Super Bowl, hundreds of kids and their parents waited in line for autographs from Vikings stars, threw passes and practiced their refereeing skills.

But if national trends are any indication, fewer of these kids will play the sport than would have a decade ago. According to Aspen Institute data from the Sports and Fitness Industry Association, youth football participation declined 19 percent between 2011 and 2016.

Kate Sustacek arrived at the Shakopee H.S. event with her young son and daughter. Like a lot of parents, she’s nervous about her son playing football.

“This year we kind of talked him out of it,” she said. She said their family enjoys the sport, but working in health care, she’s seen the toll of injuries. “With all the injuries, concussions, it just makes me really nervous,” she said.

Football remains the most popular sport in America, but for years now, magazine articles and academic studies have touted the sport’s demise. The fear is that it is just too dangerous to continue.

A group of former NFL players have begun advocating no football until at least age 14, citing concerns over kids’ developing brains.

Then, just days before the Super Bowl, NFL Hall of Famer Brett Favre appeared on CNN saying, “How do you make the game safer? You don’t play.”

With that type of warning from a legendary player, can football survive? KARE 11 asked Roman Oben, a former offensive lineman who now serves as the NFL’s director of youth and high school football.

“Football takes the brunt of the injury discussion,” Oben added. “But football’s also done more in terms of innovation and technology and rules changes.”

Ben Utecht, a former Minnesota Gophers great who won a Super Bowl with the Indianapolis Colts, has become an outspoken proponent of better care for players.

He paid the price for football glory with severe memory loss.

“Things like forgetting a best friend’s wedding and singing in his wedding," he said. "You know, things like that no longer have relevance because I don’t remember them."

But Utecht believes by increasing education around brain injury, and taking better care of those who do become injured, football can survive.

“I would hope in 20 years we are still celebrating the game of football,” he said. “If we can get that taken care of, I think, 'Why can’t we still enjoy this game?'”