The risk of frostbite and hypothermia is very real during Super Bowl weekend, and it's one of the reasons the hospital literally next door to US Bank Stadium is gearing up for an influx of new cases. 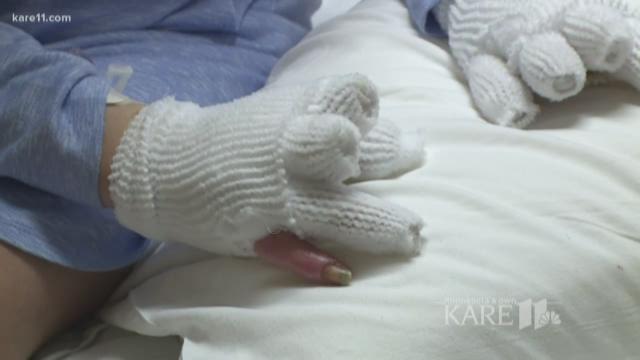 MINNEAPOLIS -- Take outdoor events, add searing cold wind chills and mix in the effects of alcohol, and you've got the recipe for hypothermia and frostbite.

And if you take into account the fact many visitors to Minnesota have no concept of how minus-10 actually feels, there's bound to be some serious exposure injuries.

That's one of the reasons Hennepin County Medical Center, the level one trauma center located next door to US Bank Stadium, is expected to see an influx of new cases Super Bowl weekend.

"In these conditions, it can take only 20 to 30 minutes for frostbite to set in," Dr. Jon Gayken, a burn and trauma surgeon at HCMC, told KARE.

"And 20 to 30 minutes is not all that long, when wait times to get into events and concerts can sometimes be hours."

Dr. Gayken said that liquor can impair judgment to the point that people don't realize they're suffering from exposure, and alcohol itself makes a person more susceptible to frostbite because of dehydration and changes in circulation.

During the Super Bowl weekend, Minneapolis and several other cities have extend bar hours until 4:00 a.m., which is another reason for concern.

Gayken said the two best ways to prevent hypothermia and frostbite is to stay bundled up, and drink responsibly, if at all.

"Frost bite is one of those things, that for lack of better terms, sneaks up on people," Dr, Gayken explained.

"Often times people don’t recognize they have it until either the next morning, or even the next day, when they start to develop blisters or pain."

He said often people use the term frostbite to describe what's actually known as "frost nip" -- redness, and the sensation of fingers and toes thawing out when they come inside after being in the cold.

But he said you shouldn't hesitate if you think you have frostbite, because the blood thinning drugs doctors give patients to mitigate the damage work best in the first hours after exposure.

"If you’re coming to town for the Super Bowl and you’re not used to it, know that we’re here and this is something we do every day," Gayken said.

Frostbite can be devastating

Kelly Kraemer has been in the burn unit at HCMC since New Year's Day, recovering from severe frostbite she suffered when she fell asleep outdoors New Year's Eve.

"I didn’t know what happened. My eyes blurred and my hands looked gray," Kraemer told KARE. "And I couldn't bend my fingers. It was like my hands were claws."

The temperature reached 13 degrees below zero that morning. And Kraemer, who has been homeless for the past six months, couldn't find her fiancé. They had been unable to find an affordable hotel room earlier that night in Brooklyn Center.

"My gloves got wet, so I had to take them off, and after a while I just finally found a blanket."

She walked into a Target store, and employees called an ambulance once they saw her hands.

"While I was warming up, the pain was getting worse and worse. So, I was starting to scream more and more," Kraemer explained.

Doctors at HCMC were able to save her toes, but they had to amputate her index fingers and pointer fingers on both hands.

"They're treating me really well here," Kraemer said, as she looked at her bandaged hands with shortened digits.