Within 24 hours of Gabby's story airing on KARE 11, two GoFundMe pages had been created, with donations of more than $10,000. 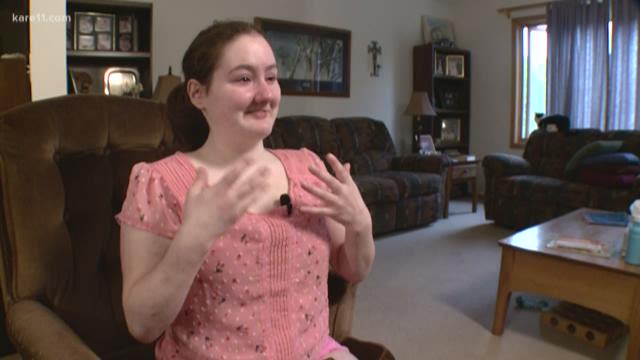 Within 24 hours of Gabby’s story airing on KARE 11, two GoFundMe pages had been created, with donations of more than $10,000.

“My grandma recently passed and she was a very giving person and I thought it would be a good time to pay it forward and do something good for somebody else,” Geoff Roering said.

In a matter of hours, Roering and his wife Kaylene had collected from donors more than $5000.

The Minnesota Dental Association and Foundation has launched its own GoFundMe page and pledged $5000 in seed money.

MDA executive director Carmelo Cinqueonce said of Gabby’s insurance denial. “We can't leave it there. I went to sleep thinking I've got to do something.”

Gabby was born with a condition that left her unable to feel pain. Her mouth suffered permanent damage, because, as a young child, she had no pain sensors to protect it from her own emerging teeth.

Only a few dozen people in the world have Gabby’s condition, congenital insensitivity to pain with anhidrosis. Her doctors had never heard of it. No support groups existed to help guide her parents, who felt helpless as they tried to navigate an ever-changing set of circumstances they were unequipped to handle.

While grateful for the donations, Steve Gingras, Gabby’s father said, “I’m really torn too. I want to be mad at the insurance company, or the insurance system, but, yet, it restores my faith in humanity because people know what’s right.”

Aetna, the insurance company which denied payment for Gabby’s procedure, said in a letter to Gabby’s Mayo Clinic doctor that dental work is not covered under Steve’s company-sponsored health care plan.

The Mayo has proposed rebuilding Gabby’s mouth with a graft from her hip bone, after which she would be fitted with dental implants. Gabby’s parents have been told the procedure would cost between $60,000 and $120,000.

Gabby remains hopeful the first part of the procedure can still be performed before she starts college this fall at University of Minnesota – Morris.

As thousands of dollars of donations poured in, Gabby admitted Thursday she had not watched her own story.

“I just hate seeing myself,” she said. “I just don't like anything that makes me different.”

Trish Gingras, Gabby’s mother, says it’s difficult for her family to except help, but expressed gratitude to the donors.

“I hope Gabby has a fantastic career and a life, and I hope that someday they can say, ‘We helped her get there,’” Gabby’s mother said.