Nancy Sawyer has turned 13 gardens on her Orono hobby farm into the Garden of the Sleeping Angels -- a place to help families mourning pregnancy loss, stillbirth, and infant death. 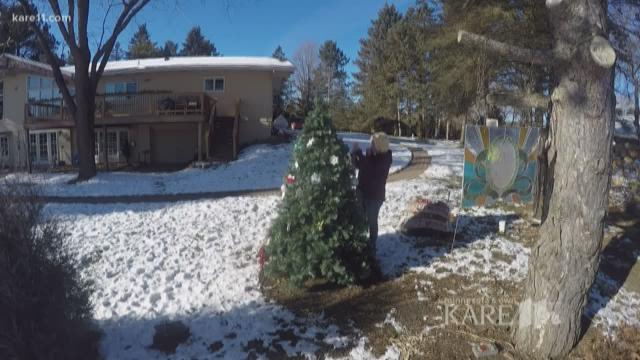 ORONO, Minn. – In the Christmas season when we often look to angels, Nancy Sawyer, of Orono, is certain she walks among them.

As a former high-risk obstetrics nurse, she set out to give grieving families a bit of "heaven on earth," after helping families mourning pregnancy loss, stillbirth, and infant death.

Sawyer, 73, has turned 13 gardens on her Orono hobby farm into the Garden of the Sleeping Angels.

Ceramic angels memorialize more than 80 babies, and during the Christmas season, knowing the holidays can be an unbearable time of year for families experiencing loss, Sawyer provides a Christmas tree where families come and hang an ornament on a tree in memory of their child.

Every December, the Garden of the Sleeping Angels is a place where Amber Goodyear, of Chaska, tends to her heart. It's the month when she lost her son Silas, on Dec. 8, 2012.

Goodyear's water broke at 26 weeks. Silas survived another month in-utero before Goodyear and her husband learned meeting their son would also mean good bye. After a C-section, he was born still into her arms.

“He was perfect, he weighed 3.5 pounds and had black curly hair, his hands were just long, he was so darn cute,” said Goodyear. “We sat and sung to Silas while they stitched me back up, and just held him and took pictures, and little did I know he would be a story forever.”

The Goodyear family first visited the Garden of the Sleeping Angels when Sawyer's vision was just beginning. Sawyer has now expanded into a nonprofit organization, providing a plaque in memory of a child for any family who requests a memorial.

“Years ago, if somebody lost a baby we would take the baby away, out of sight, out of mind, and there are people who have never touched their baby,” said Sawyer. “Whether it's a holiday or a summer day, it's our responsibility to keep talking about it. We are meeting a need for people to grieve and remember and reflect.”

Goodyear said the Christmas season has been difficult since losing Silas, but she's realized over five years, she can still find joy, and see the gifts rising from her grief.

Silas was born during a snowstorm, and she's reminded of him every time she sees a snowflake. She's since given birth to two more healthy children. She reaches out to other grieving families, helps educate nurses and hospitals on infant loss, and also is on the board of the Star Legacy Foundation, an Eden Prairie-based organization dedicated to reducing pregnancy loss, neonatal death and stillbirth.

Silas was cremated, and Goodyear says the Garden of the Sleeping Angels gives her a tangible place to remember him.

On a sub-zero day, Silas's new ornament, a gold cross, gleamed in the sun, a reminder light can still return to a season of despair.

“Silas is my angel, he guards over our family,” said Goodyear. “There have been so many lives Silas has touched. That was his journey.”

To learn more about the Garden of the Sleeping Angels, visit the Facebook page and contact Nancy Sawyer here.