Garth Brooks coming to town, but will the music be clear enough to hear?

Garth is a huge draw, but the stadium is not known for its stellar sound quality. 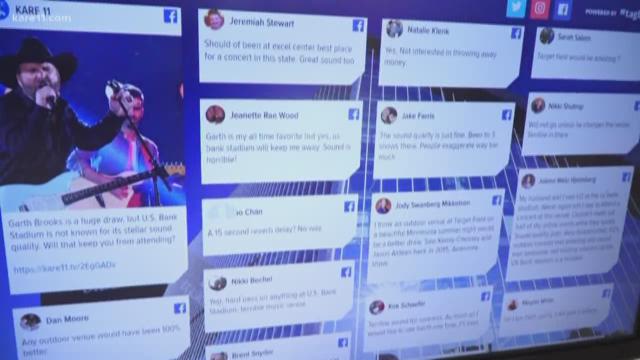 This time the superstar is bringing his Stadium Tour to U.S. Bank Stadium.

Tickets go on sale next Friday for the show in May.

Garth is a huge draw, but the stadium is not known for its stellar sound quality.

In its first two years the stadium has hosted some of music's biggest names: U2, Metallica, Luke Bryan just to name a few.

Fans have been happy with their performances, but they’re less excited about the sound quality of the stadium.

Social media is filled with countless complaints about the acoustics at U.S. Bank Stadium.

"They've got all kinds of surfaces that clearly weren't designed based on acoustics," Orfield says.

Orfield understands sound better than most. He currently owns Orfield Laboratories, where “the world’s quietest place” is kept.

The “quiet room,” as it’s called, is used by companies to better understand how loud their products are and how they can make them quieter.

Orfield worked on the sound system at the Metrodome, which was also known for bad acoustics.

“They had an especially bad concert and wanted to make things better,” Orfield explains.

Through his work Orfield was able to get the reverberation at the Metrodome down to a respectable 10 seconds.

Basically, that means sound would linger in the stadium for about 10 seconds after it was made.

So, every guitar chord, drum beat, or note, would basically echo in the stadium for an additional 10 seconds.

“We’re thinking U.S. Bank Stadium has something like 15 or 16 seconds of reverb time, which is insane,” Orfield says.

Insane when you compare it to the reverb time at The Armory, which Orfield says is about one second.

“It’s a space where sound is clear, and they clearly made it with acoustics in mind,” Orfield says.

This statement was sent to KARE 11 regarding those improvements:

“The venue is one of many pieces in the overall acoustical equation. Acoustics will vary due to several factors including the sound equipment brought in by the tour, the genre of music and the artist. Additionally, the acoustics are greatly impacted by the tour’s sound engineers.

Within the past year, U.S. Bank Stadium has made two capital improvements to assist in the acoustic experience including a thick, velvet curtain to cover the East video board and the installation of acoustic panels on the fascia near the Thomson Reuter’s Press Level. Our audio-visual team continues to support each tour as closely as possible in order to provide a best-in-class experience for all our guests.”

Orfield says these improvements should make a difference when Garth Brooks comes to town, but the sound still won’t be perfect.

He says the sound engineers hired by each musical artist also carry a lot of the responsibility of producing a superior quality sound. So, part of the experience next May falls on the king of country himself.