Hair stylist carries her red salon chair to the homeless

Katie Steller says she doesn't have the answers to end homelessness, but is doing what she knows. 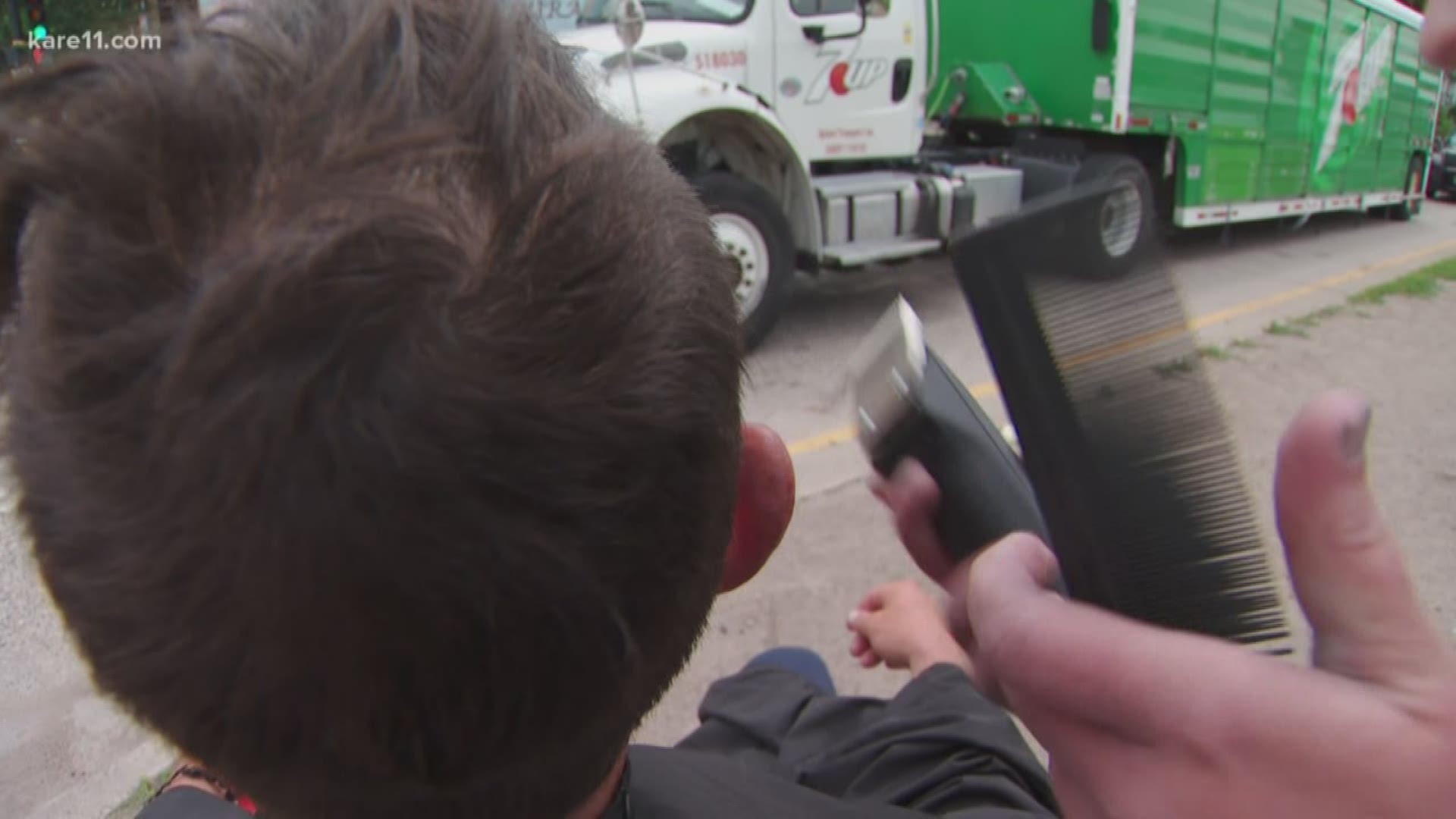 MINNEAPOLIS — Make an appointment at Steller Hair Company and owner Katie Steller will offer you a seat in one of ten flame-red chairs.

Her eleventh chair - the one she hauls to street corners in the back of her Nissan - is not.

“If fear is contagious, why can’t kindness be?” the hair stylist asks.

At least once a week, Katie invites people who are homeless to take a street-side seat in her mobile salon chair for a free haircut.

“I could technically cut somebody's hair on a folding chair or on a curb or wherever, like I don't need that chair,” Katie says.  “But it’s not about what’s easy, it’s about really showing value to people.”

So, Katie, accompanied by her assistant Emily Lall, hauls the hefty chair in the back of Katie’s SUV until they spot a man holding a sign.

“We’re driving around giving free haircuts,” Katie tells Justin Landes through her rolled down driver’s side window.  “Would you want a free haircut?

Minutes later Justin has hoisted himself into Katie’s chair set temporarily on a corner within sight of U.S. Bank Stadium.

"I think she's beautiful,” he says as Katie laughs off the compliment. “I think this is awesome,” Justin continues.

Katie first used her red chair as a bridge to the homeless in 2013.  After a six-year hiatus spent building her salon business, she’s back at it.

“It’s looking at what skill do I have, what gift do I have, and how could that benefit somebody else,” Katie says.

Emily is among the salon employees and volunteers who pack essentials that Katie distributes.

On a recent outing, Emily helped Katie lift the chair in and out of the car and wheel it on a hand truck to its next location.

“She’s a huge role model to me,” Emily says.

The pair greeted Edward Rosser on his corner off I-35W north of downtown.

This would be his second haircut from Katie.

“I like the traveling barber,” he says with a laugh.

“Traveling barber,” Katie responds with a laugh of her own. “That's me!”

“I was diagnosed with ulcerative colitis when I was 11 years old,” she says. “When I was 18, they actually removed my entire large intestine.”

As a side-effect of her condition, Katie’s hair began to fall out.

“When you start to lose it, you're like, wait, I didn't realize what a big part of my identity that was,” Katie says. “That's probably my main motivator. I mean, I don't do hair because I'm naturally good at it, I'm good at it because I saw it as a way and a vessel to connect and care for people.”

Katie saw Sylvia and her sign in the Cedar Riverside neighborhood.

“I want a different style,” Sylvia told Katie.  “I want to get rid of the old me.”

Sylvia says social security recently helped her afford a small apartment. She tells Katie says she’s out on the street collecting money so she can do her laundry.

As she cuts, Katie talks with Sylvia about life and kids – like Katie would with any of the customers at her salon.

“I want her to feel a certain way,” Katie says later. “When you feel good about yourself, it can inspire you to do so many things.”

Katie is aware of her limitations.

“I’m not claiming to know all the answers, I’m a hair stylist,” she says. “I’m just using my skill.”

Sylvia says she normally cuts her own hair and hasn’t had a salon cut since 2001.

Katie asks Sylvia if she could stop and cut her hair again sometime.