'He Could Have Done Anything.' 11-Year-Old Machete-Swinging Baseball Star Takes on Suspected Burglar

11-year-old Braydon Smith says he was told to stay in a closet, but instead he came out swinging a machete. He injured one of the three suspects who all ran away. 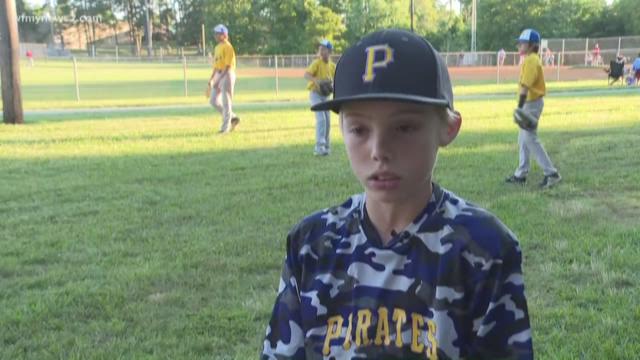 11-year-old Braydon Smith knows his way around a baseball diamond. As a player for the Burlington Pirates, he's had some training swinging a bat...but he never thought that training would be useful to him off the field.  Friday morning, he was home alone when a stranger knocked on his front door.

"I was hiding behind my door, I didn't answer the door," said Braydon. Braydon says a man then burst through the front door and found him in his room. "When he came in the room, he pointed the gun at me and he told me to sit down on the ground and get in my closet. And I did that."

The suspect went into the living room to gather electronics, then went back to question Braydon.

"He found my phone on the counter and he took the phone but he dropped it, and that's when I picked up my machete and hit him in the back of the head."

"And if I didn't do anything about it, he could've taken me with him. He could have done anything."

The Sheriff's Office says Hall dropped everything and ran, but was later arrested at a local hospital.

Despite the frightening ordeal, Christopher Smith says his son only had one thing on his mind.

"He was like, 'Am I still going to be able to play baseball and get back into the house to get my uniform?' I said heck yeah we are going."

Dad says he trained his son to expect the unexpected.

"My dad has taught me a lot of stuff like to stay calm," said Braydon.

But dad says a higher power also had a hand in his son's safety.

"I thank God he had a big part in it. The Lord was looking out for him today," he said.

From swinging a machete to swinging a bat...all in a day's work for young Braydon.

Hall is still in the hospital, and facing multiple charges. Deputies are still looking for two other suspects.

Since the story aired Jataveon Hall left the hospital Friday evening prompting a manhunt. He was arrested Sunday in Burlington and is currently in the Orange County Detention Center.