A trip to the doctor led to a life-saving diagnosis; now baby Ozzie's wait for a heart begins

If the Piepers had put off a visit to the doctor, their son may have died, but baby Ozzie is still in need of a miracle. 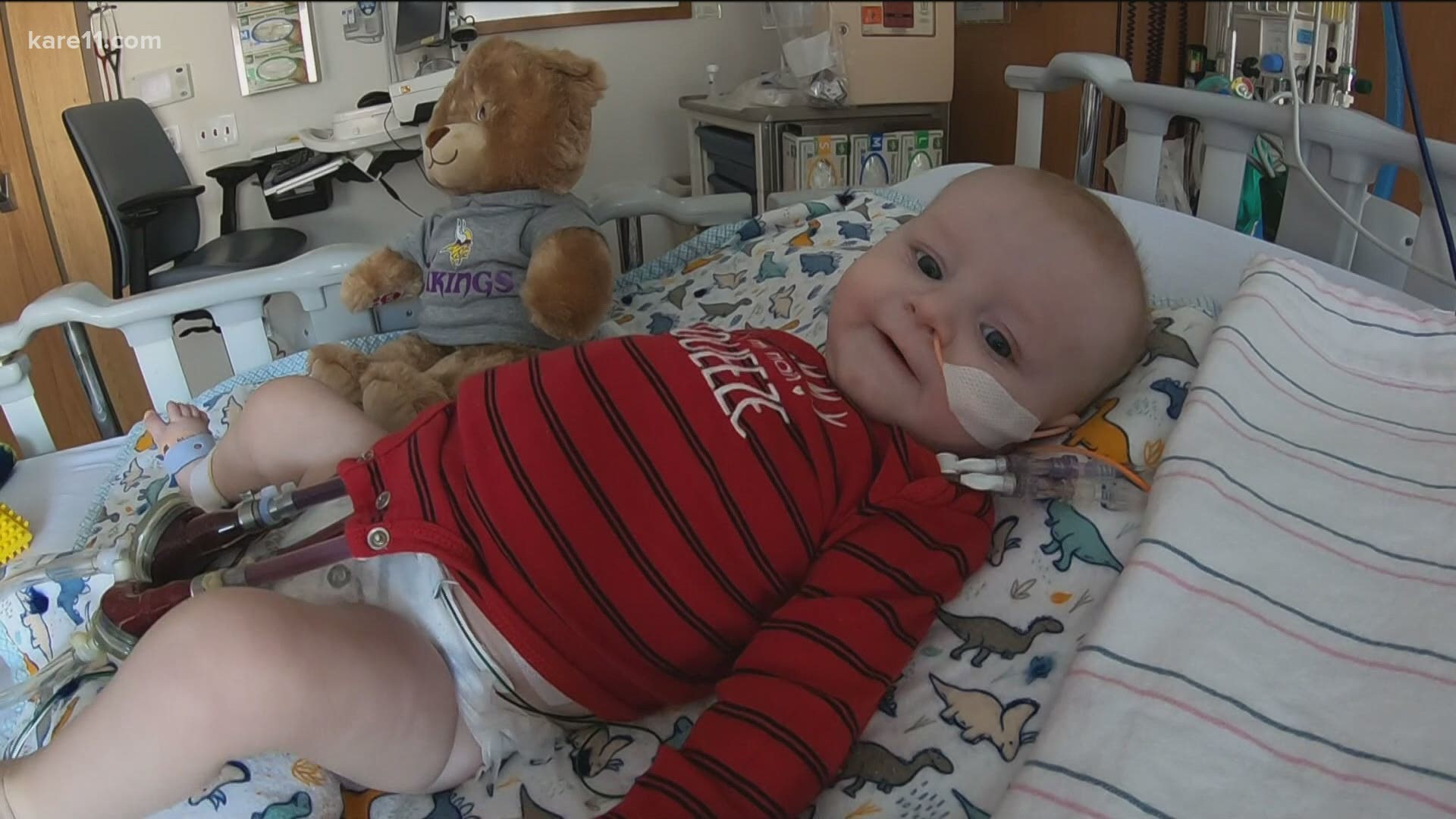 MINNEAPOLIS — For the past 55 days, Eli and Jennifer Pieper have felt frozen in time.

"It kind of feels like Groundhog's Day to us," Eli Pieper said. "It's like we're on repeat. We're just waiting for the day to change."

When they're not working, the couple regularly makes a two-hour, roundtrip commute from the small town of Hamburg to Children's Minnesota, where their infant son, Ozzie, is awaiting a new heart.

"We could still lose him," Jennifer Pieper said. "There's a lot of uncertainty."

Ozzie was born on Aug. 4th, 2020 and seemed perfectly healthy until the morning of Dec. 30.

"Something was very off with him that day," Eli Pieper said.

After watching his son vomit after two straight feedings – something very uncommon for Ozzie – Eli made a decision to take him to see the pediatrician.

"When I walked in that room and I saw the way he was breathing, kind of fast, I was like, 'Oh wow,'" said Dr. Crystal Knutson, one of two pediatricians who saw Ozzie at the Park Nicollet Clinic in Shakopee.

Dr. Knutson and Dr. Caitlin Pelletier were worried that Ozzie was dealing with more than a digestive issue, so they ordered some tests and an X-ray, which revealed that Ozzie was suffering from an enlarged heart.

Dr. Edens said additional tests found that Ozzie had Dilated Cardiomyopathy, a disease that weakens the heart muscle and affects just one in 100,000 children.

"It's very critical they caught this when they did because sometimes the first sign that we get that something happened, is the child actually dies," Dr. Edens said.

Though Ozzie entered Children's Minnesota in good spirits, within a couple days of his arrival he went into cardiac arrest, and doctors had to put him on a ventilator.

"I thought the worst," Eli said. "I thought we were going to lose another son."

"At 22 weeks along, I went into pre-term labor," Jennifer said. "They weren't able to stop the contractions, and we ended up having our first son early."

They each got a chance to hold their son Logan, but he died just two hours after being born.

"It was really tough coming back to this place after we lost Logan," Eli said. "We had to drive back down here and it was like a big flashback."

But this time, Ozzie's doctors are optimistic. An external Berlin Heart, is now pumping blood for him. It quickly took pressure off of his sick heart and he is now off of the ventilator and regaining his strength.

But his journey toward a new, infant heart is just beginning.

RELATED: U of M researcher develops new way to screen for virus impacting babies in utero

"Unfortunately, the wait times for babies are extremely long," Dr. Edens said. "The national data is about 30% of babies who are waiting, will die waiting because there's just not enough hearts."

Hoping for such a precious gift is impossibly difficult.

"The day that we get a heart is great news for us but it's devastating news for another family," Jennifer said.

"Somebody's tragedy is going to be our miracle," Eli said.

For now, they pray that baby Logan won't be Ozzie's only guardian angel.

As they wait, Eli and Jennifer say they're grateful for the community of Hamburg and Waconia, which have helped organize several fundraisers, and raise funds for the journey ahead. The Pieper's have a GoFundMe page for anyone interested in helping.

The Piepers are also glad that they made the decision to see a doctor, even during the pandemic. Ozzie's medical team say that many families have avoided appointments in recent months, but his case stands of a reminder of why it's so important to seek help and go to check-ups.

"Ozzie's situation was picked up because his astute pediatrician didn't like what she was seeing," Dr. Edens said. "She wouldn't have seen that if he didn't go."

"We want parents to know that it's very, very safe in the clinic," said Dr. Pelletier. "So if you have any worries at all. Please, come into the clinic. I would love to see you, we would all love to see you. It can potentially put off some long lasting problems in the future."