16-month-old Hunter Schmitz is living proof that donating blood can save a life. 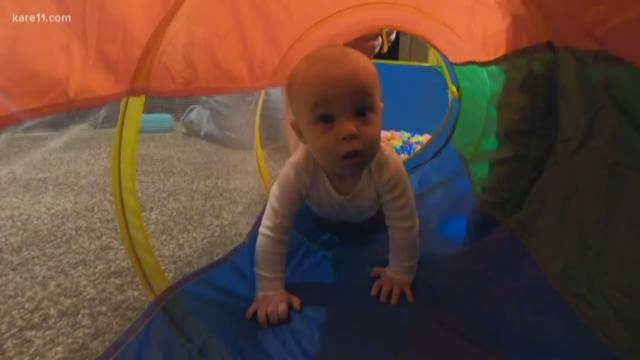 Every squeal, every smile and every milestone little Hunter Schmitz reaches is monumental.

And that’s thanks to donations from strangers.

16-month-old Hunter was diagnosed with a chromosome microdeletion disorder, which means he's missing part of his 10th chromosome. He was also born with a hole in his heart, making it harder to pump blood to the rest of his body.

Hunter's family didn't realize that anything was wrong with him until he was nine days old. The newborn wasn't eating. In fact, his mother Brooke says when they tried to give him a bottle, he would just scream.

Doctors were stumped. They had done a battery of tests on the little boy, but weren't able to figure out what was going on. They found a significant ventricular septal defect, a hole in his heart, but weren't convinced that was the source of all of his health issues.

"It was an emotional rollercoaster," Brooke said. "At that point he had lost so much weight, he was skin and bones and he was just grey and he looked so sick."

In April 2019, Hunter underwent open heart surgery and one thing made a huge difference in his recovery. Blood transfusions.

“I remember when his little body started to crash and they had to give Hunter blood to stabilize him,” recalls his mother. “If it wasn’t for the blood transfusions, we would be having a completely different conversation right now.”

Hunter's family said he went from being grey, with hardly any pigment in his skin, to looking full and flush with healthy color.

Now Hunter is thriving. He's playing, laughing and yelling, which seems to be his favorite.

“He’s doing so well, not only because of the care he received, but because some gracious people somewhere out there donated their blood,” Brooke said. “To those willing and able to donate blood, please do. It had a huge hand in saving my little guy's life and we will always be grateful that blood was there when his life depended on it.”