While the vaccine is still in clinical trials, doctors say they are very excited about it because it seems to be working with few negative side effects. The problem is, studies show less than 5 percent of adults with cancer enroll in trials. 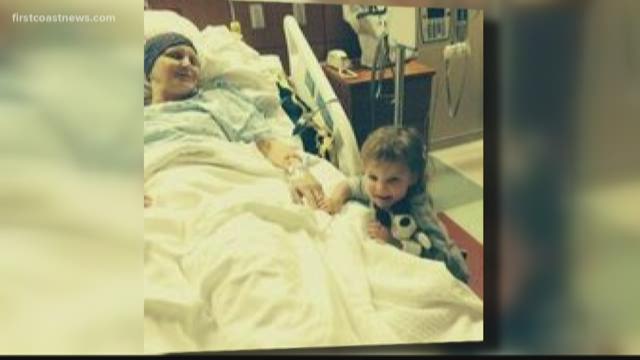 Tens of thousands of women die annually from breast cancer, but soon, the number could decrease. Mayo Clinic in Jacksonville is working on a vaccine for triple negative breast cancer that could someday save millions.

While the vaccine is still in clinical trials, doctors say they are very excited because early results indicate it seems to be working with few negative side effects. The problem is, reports show less than 5 percent of adults with cancer enroll in clinical trials or studies.

That's why Stacy Hanson, a Jacksonville woman battling triple negative breast cancer, is pushing more cancer patients to get involved. She believes it would help doctors make strides that would save future generations, like her daughter Lucy.

"She owns this house, that's for sure," Hanson said about her daughter.

Photos and artwork of Lucy can be found all over her home. Hanson calls her daughter her miracle child.

Two years after Lucy was born, Hanson found out she had breast cancer. After beating it once, it came back as Stage 4 triple negative metastatic breast cancer.

"I was scared to death," Hanson said. "My daughter was 5-years-old and I didn't think I would make it to see her start kindergarten."

Turns out, Hanson's father had the breast cancer gene, but Hanson was the only one of her siblings to get it.

For Lucy, there could be hope. Right now, the Mayo Clinic in Jacksonville has a clinical trial for a triple negative breast cancer vaccine.

"So the idea is similar to vaccination against infection, so you know, measles, influenza," said Dr. Saranya Chumsri.

"It's for patients who already had breast cancer but, early stage, and the tumor has already been resected," Chumsri said. "Then we will vaccinate the patient to help reduce the risk of recurrence."

"We need clinic trials, and we need participants," Hanson said.

Since Hanson is already at the last stage of cancer, this vaccine wouldn't work for her. Still, that's not why she's advocating for it.

"Yes, I hope that in my lifetime, science catches up and I get 40, 50 years," Hanson said, "I want that for myself. But more importantly, I want my daughter to have a life without cancer. I don't want her to ever have to worry about cancer."

Hanson is under a different clinical trial and right now, she says her tumor is about the size of a grain of rice.