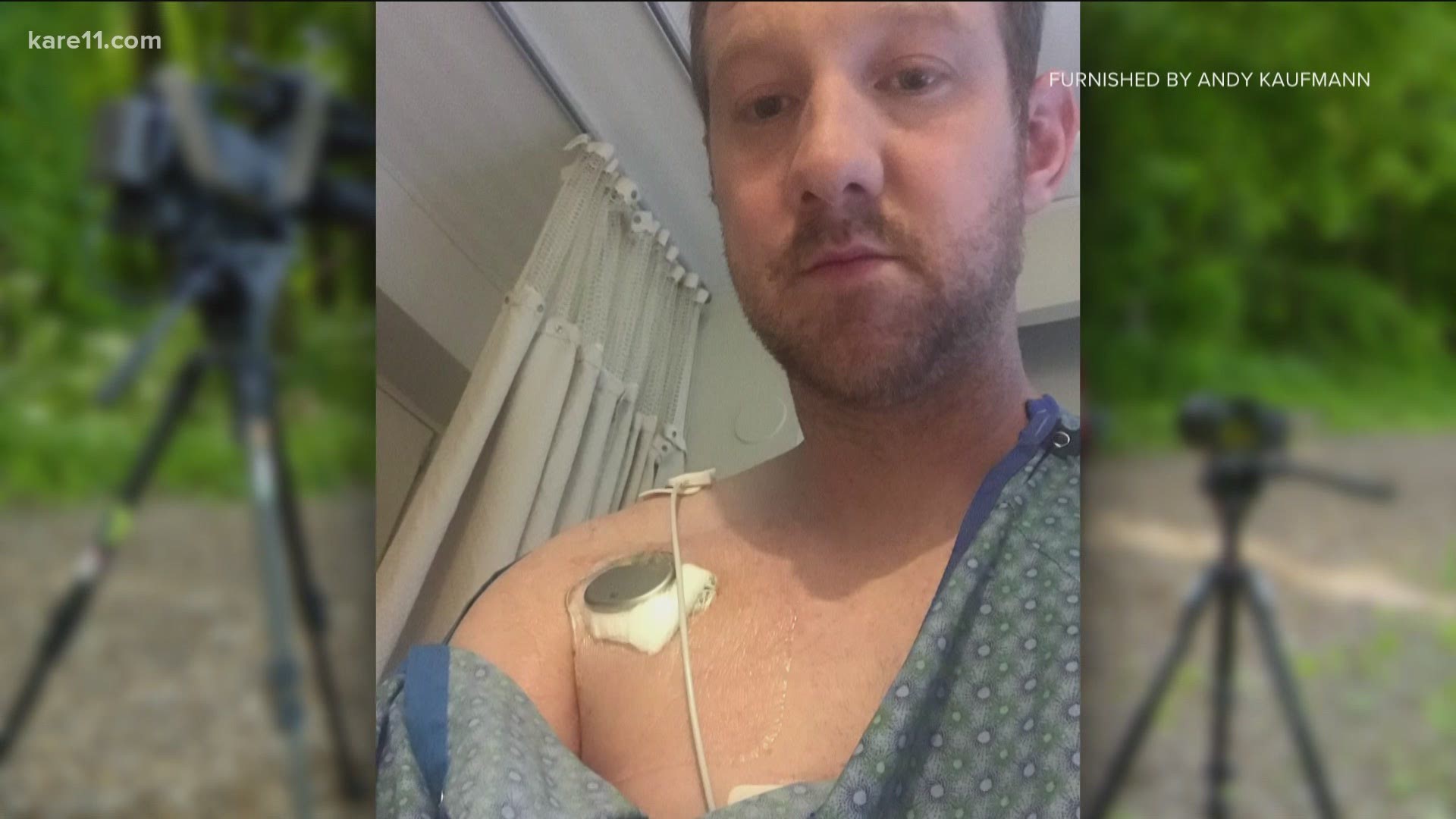 BURNSVILLE, Minn. — Around this time last year, the world looked quite different for Andy Kaufmann. As a Minneapolis firefighter he was busy, making runs.

"I was riding on the rigs in Minneapolis, and I noticed this weird sweat all over my body," Kaufmann explained. "I had been working three days straight and I was kind of thinking--what's going on here? Maybe I can go home and take a nap. The city was pretty busy during that time during the unrest."

Kaufmann never got that nap. Instead while he took a five minute breather inside the rig, he blacked out.

"We took a turn and my head bounced off the glass of the truck and I didn't move from it," Kaufmann said. "The guy sitting across from me goes, 'we need to pull over right now.' I had gone into basically full arrest. My heart was no longer working had a completely messed up heart beat. I was down to about eight beats per minute."

For reference, a normal person's heart beat ranges from 60 to 100 beats per minute.

A myriad of tests later, the healthy, then-34-year-old Kaufmann found out he had Lyme Carditis, a rare case when Lyme disease bacteria enters the heart.

"The top half of my heart and the lower half of my heart weren't talking," he explained. "So you have the atrium up top and your ventricle which pumps the blood. There's usually this beautiful cadence where you work together and it happens a million times in your life and you don't think anything of it."

He said he didn't recall pulling a deer tick off of him in the days leading up to the incident.

"I'm an outdoorsman, [I do] foraging, hunting, I find ticks all the time," he said. He said he thought Lyme Disease was like chicken pox, something you catch and don't have to deal with again the rest of your life. "I thought it would be fine--but it's definitely not like that. It's crazy this little bug the size of a pinhead can do so much damage."

Kaufmann says he doesn't even remember having the classic symptom of Lyme disease, where the tick bite shows up with a red ring around it.

But having made a full recovery, he says he knows how lucky he is. He doesn't even have to wear a pacemaker.

"I have nothing," he said. "I'm back to normal health. I get checked up every six months to make sure my heart is looking healthy--so far no signs. It's been a year now."

Now as a survivor of Lyme disease, Kaufmann is working with Lyme Awareness Minnesota to spread the word.

The group is looking to get a copy of Lyme disease awareness children's books to every elementary school in Minnesota.

"It's a crazy disease people should know about, but they shouldn't be afraid of (it)," Kaufmann said. "If you're doing your tick checks and watching your body, looking for the rash, you should be OK. I just want people to know that, go ahead enjoy the outside, and take care of yourself when you're done. That's what's important to me."

If you would like to donate to the cause you can find information at lymeawarenessmn.com.