The high potency of the synthetic opioid, carfentanil, has local and state agencies changing safety practices to keep staff safe. 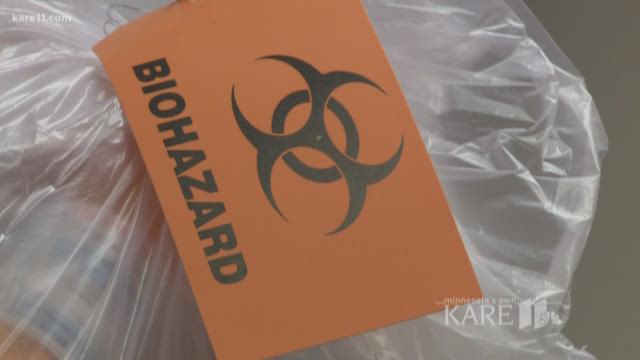 MINNEAPOLIS, Minn. - The overdose cases are compounding as communities try to deal with the opioid crisis.

Now, Minnesota law enforcement is dealing with a newer, more powerful synthetic opioid, carfentanil. It's so potent it was developed to tranquilize large animals. Just two specks, each about the size of a grain of salt, can be deadly.

"You have no idea what you're getting on the street no matter how it's being represented to you," said Dr. Andrew Baker, Hennepin County's Medical Examiner.

Carfentanil is typically mixed in with other drugs such as heroin and fentanyl. Many times, people don't know they're buying carfentanil. The drug is 10,000 times more potent than morphine. It kills quickly.

"You go to a scene and the person is lying there dead and there's literally a tourniquet still next to their arm and a syringe on the floor right underneath them," said Dr. Baker.

Records from the Hennepin County Medical Examiner's Office show this year at least 12 carfentanil-related deaths in Hennepin County alone and one death in Dakota County.
Baker's staff noticed the first batch of deaths earlier this year and alerted the Drug Enforcement Administration. His team was recently nationally recognized for its discovery that carfentanil is killing Minnesotans and for the public health response to the problem.

Last year, the DEA issued an alert to law enforcement across the country of the dangers of carfentanil. It also sent out a list of best safety practices.

The continued fentanyl and carfentanil overdoses have law enforcement and other agencies making changes to protect staff.

In Roseville, officers always did drug testing in the field, but not anymore because its too risky. Roseville Police Chief Rick Mathwig, tells KARE 11 News, that his officers now send all samples to the Bureau of Criminal Apprehension for testing.

As the BCA received more synthetic opioid cases, that agency is making changes too.

All suspected batches of fentanyl and carfentanil are now tested in a special room with a staff member nearby and staff keeps naloxone, a medication that reverses the effects of an opioid overdose, nearby.

"We're most concerned about inhalation or getting into the mucus membranes such as the eyes, the nose or through the skin potentially," said Drew Evans, BCA's Superintendent.

In the field, BCA agents are now covered head to toe with a respirator on or near them.
Last year, according to the BCA, the agency ran four tests confirming carfentanil.

Investigators are bracing for more cases and so is Dr. Baker and his team, who've made changes themselves. In the field, his team no longer handles drug evidence. They leave that up to law enforcement.

"When you ask me what do i see coming down the pike. the answer is its so murky i don't even know how to answer that.'

He says his team is starting to see a newer drug, cyclopropyl fentanyl.

This week, HealthFair 11 and KARE 11 are urging you to take part in a drug drop-off campaign. All you have to do is take your un-used, unwanted or expired medication to a secure, drug drop-off site. You can find a link to them at kare11.com