Nick Zerwas spent several days in the hospital - and saw first-hand what the virus can do. 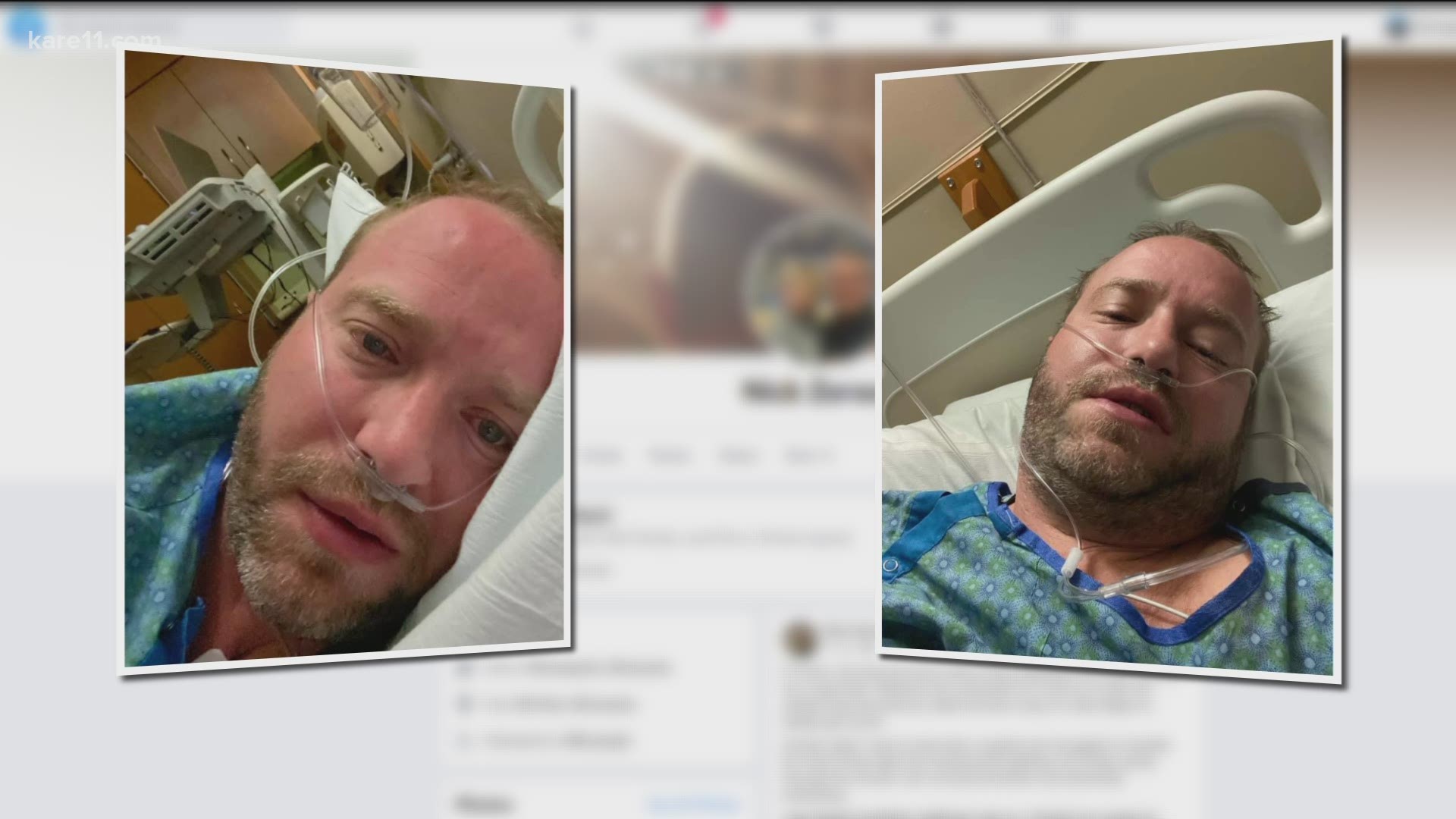 ST PAUL, Minn. — Former Minnesota state representative Nick Zerwas has endured 10 open heart surgeries over the course of his life, dating back to childhood when doctors diagnosed him with a heart defect.

But his bout with COVID-19 this past week has posed unprecedented challenges for the 39-year-old.

Zerwas, who represented Elk River and areas northwest of the Twin Cities as a Republican from 2013 to 2019, posted about his experience on social media this weekend as he urged others not to underestimate the virus. He shared the same message with KARE 11 during a Zoom interview on Saturday.

“This is very serious. We all need to take it very serious,” Zerwas said, “and we need to watch out for one another.”

Standby by for a long thread:

It’s time I let everyone know about what happened this week. Sunday my cough that I believed was connected to a cold our 4 year old Jackson had the previous week (he had a neg Cov test) began to rapidly get worse. pic.twitter.com/LQY8ziepgu

Zerwas said his symptoms took a major downward turn last Sunday evening. He did not sleep very well and coughed through most of the night. By Monday, it had become obvious that the cough was not connected to his four-year-old son Jackson, who tested negative for COVID-19. Zerwas struggled to even walk down the stairs, finding simple acts of movement exhausting, and noticed that his home pulse oximeter showed his oxygen dropping to dangerously low levels.

He said he ultimately landed at North Memorial’s Maple Grove location, where medical staff isolated him in the ICU after he tested positive for the virus.

“That first night, when I thought that perhaps it was going to get to a point where I would need to be on a ventilator, there was a time there where I was really, really terrified,” Zerwas said, “and concerned that this thing was going to go downhill very, very rapidly.”

Zerwas, however, managed to avoid the worst-case scenario, thanks to a combination of convalescent plasma, remdesivir and steroids – an advanced treatment method that would not have been available when the pandemic started nine months ago.

“Quite honestly, from that point on, it was pretty miraculous, in a matter of 12 to 18 hours just how much better I felt after that treatment started,” Zerwas said. “And for the next four days, we continued that treatment in the hospital. And I was fortunate to have sprung loose on Friday.”

After the former representative posted to Facebook and Twitter on Friday, he drew hundreds of comments and well-wishes from members of the public. His story comes at a time of great distress for Minnesota: the state just recorded its deadliest week of COVID-19, continues to set records in cases and hospitalizations, and appears to be running thin on space for patients.

Earlier this month, state health officials reported 98-percent ICU capacity in the Twin Cities metro area – a statistic that Zerwas can support with his own experience.

“The hospital, at one point, wasn’t sure if they were going to have a bed for me or have to transfer me to a different facility,” Zerwas said. “So, I know our hospitals are very, very busy, and potentially on the verge of being overwhelmed.”

Upon his return from the hospital, Zerwas is still suffering from a persistent cough, requiring him to stop and drink from a glass of water several times during his Zoom interview with KARE 11. He and his wife have also been wearing masks at home as they try to socially-distance themselves from their four-year-old son, which has been a major challenge.

Despite the difficulties ahead, though, Zerwas is happy to be home.

“As a former politico, I’ll just say this: the virus doesn’t discriminate between what political beliefs you might hold,” he said. “No matter where you’re coming from, we’re hoping for the best for everybody, and that everybody helps to lookout for all of our neighbors.”