Americans brace for 'hardest, saddest' week of their lives

Surgeon General Jerome Adams told "Fox News Sunday" that deaths from the coronavirus would make this moment reminiscent of Pearl Harbor and Sept. 11. 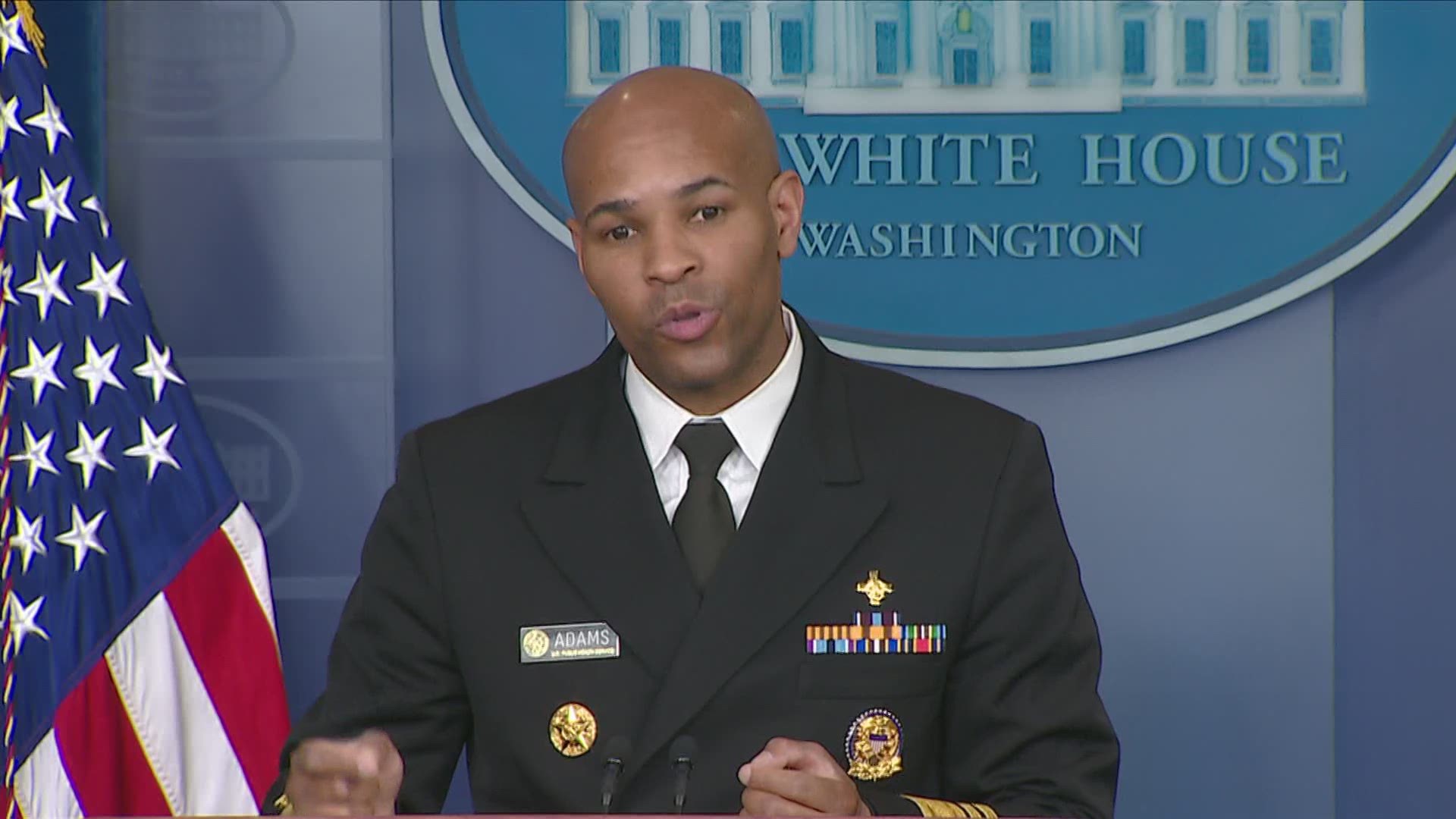 Americans braced for what the nation's top doctor warned Sunday would be "the hardest and saddest week" of their lives while Britain assumed the unwelcome mantle of deadliest coronavirus hotspot in Europe after a record 24-hour jump in deaths that surpassed even hard-hit Italy.

"This is going to be our Pearl Harbor moment, our 9/11 moment,'' U.S. Surgeon General Jerome Adams told "Fox News Sunday."

Britain recorded 708 new coronavirus deaths Saturday while Italy reported 631 deaths that day. With 621 more deaths reported on Sunday, Britain has 4,934 virus deaths overall among 47, 806 cases. Those coming down with the virus in the U.K. include Prime Minister Boris Johnson, the health secretary, England's chief medical official and Prince Charles, heir to the British throne.

There are wide fears that Johnson's Conservative government did not take the virus seriously enough at first and that beautiful spring weather will tempt Britons and others to break social distancing rules.

In an address to the nation to be televised later Sunday, the 93-year-old queen said the pandemic had caused enormous disruptions, bringing grief, financial difficulties and daunting challenges to everybody. It is only the fourth time since her reign began in 1953 that she has given such an address.

"I hope in the years to come, everyone will be able to take pride in how they responded to this challenge," she said in pre-released remarks. "And those who come after us will say that the Britons of this generation were as strong as any."

The queen's son, Charles, on Friday remotely opened a vast temporary hospital for corona patients in a London convention center after completing a week of isolation. Johnson still had a fever Friday, but his infected pregnant fiancee, Carrie Symonds, tweeted she is "on the mend" after a week in bed.

As the sun shone and the temperatures rose toward 20 degrees Celsius (68 degrees Fahrenheit), Health Secretary Matt Hancock said sunbathing in public places was not allowed and the U.K. might even ban outdoor exercise if people still ''flout the rules.''

"The vast majority of people are following the public health advice, which is absolutely critical, and staying at home," Hancock told Sky TV. "But there are a small minority of people who are still not doing that — it's quite unbelievable, frankly, to see that."

As the numbers of infections rose, the deputy head of Britain's National Health Service Providers said the agency needed to focus on quickly increasing ventilator capacity and getting more protective equipment for health care workers.

"I think that we are just a week away from the surge of this,'' Saffron Cordery told Sky TV.

Restrictions on movement vary from country to country. In Germany and Britain, residents can get out to exercise and walk their dogs, as well as go to the supermarket, the post office and other essential tasks. Yet in Serbia and South Africa, dog walking is not allowed.

In France, heat-seeking drones have been whizzing over Fontainebleau forest to identify rule-breakers after the former royal estate in the Paris suburbs was closed to the public. That high-tech measure has been coupled with more traditional police patrols on horseback and roadblocks that turn back the cars of those seeking to escape urban areas.

In Sweden, authorities have advised the public to practice social distancing, but schools, bars and restaurants are still open.

At the Vatican, Pope Francis celebrated Mass and blessed palms for Palm Sunday in a near-empty St. Peter's Basilica. Usually tens of thousands of faithful would have crowded the square outside to attend a papal Mass.

Holy Thursday and Easter services will be held the same way. In the pope's native Argentina, the faithful were using plants at home for a "virtual" blessing during a livestream of the Palm Sunday service.

Italians have not been immune to lure of the good weather either, even though the country has the world's highest coronavirus death toll at more than 15,000.

Top Italian officials took to national television after photos were published showing huge crowds out shopping in Naples, Rome, Genoa and even the hard-hit Veneto city of Padua. Lombardy vice governor Fabrizio Sala said cellphone date showed 38% of the region's people were out and about — the highest figure since March 20.

Health Minister Roberto Speranza told RAI state television that all the sacrifices Italians have made since the nationwide lockdown began on March 10 risked being reversed.

As deaths and infections soared across the United States, new infections were slowing in Italy and Spain. Rome's main hospital for coronavirus infections reported that, for the first time since Italy's outbreak began, more patients were discharged than admitted.

Spain announced 6,023 confirmed new infections Sunday, taking its national tally to 130,759 but down from an increase of 7,026 infections in the previous day. Spain's confirmed new virus deaths dropped for the third straight day, to 674 — the first time daily deaths have fallen below 800 in the past week.

"We are starting to see the light at the end of the tunnel," said Spanish Prime Minister Pedro Sánchez.

At week when millions of Spaniards typically go on holiday, data suggested most were following lockdown regulations. Transport authorities on Sunday reported an 85% decrease in long-distance public transport and an 80% drop in the use of private vehicles compared to a normal day.

Worldwide, more than 1.2 million people have been confirmed infected and more than 65,000 have died, according to Johns Hopkins University. The true numbers are certainly much higher, due to limited testing, different ways nations count the dead and deliberate under-reporting by some governments.

Almost 250,000 people have recovered from the virus, which is spread by microscopic droplets from coughs or sneezes. The virus causes mild to moderate symptoms in most but for some, especially older adults and the infirm, it can cause pneumonia and lead to death. The World Health Organization says 95% of the known coronavirus deaths in Europe have been in people over 60.

The rapid spread of the virus in the United States has prompted a chaotic scramble for desperately needed medical equipment and protective gear, prompting intense squabbling between the states and the federal government.

New York Gov. Andrew Cuomo praised China for sending 1,000 ventilators, while President Donald Trump claimed that states are making inflated requests for supplies. In mixed messages, Trump warned  that the country could be headed into its toughest weeks yet and see many deaths but also said he's eager to get the U.S. economy back on track.

New York City is the epicenter of the U.S. outbreak but more than 400 people have also died in Louisiana, where state authorities have been rushing to find ventilators. Michigan has more than 14,000 infections and 500 deaths, mainly in Detroit.

Beijing authorities said Sunday about 78,000 people had visited cemeteries in the Chinese capital for annual "tomb-sweeping" ceremonies, down 90% over last year. Thousands of others paid their respects through an online portal that allowed them to light a candle, burn incense and offer wine and flowers, all virtually.

Rising reported from Berlin. Associated Press writers around the world contributed to this report.

Follow AP news coverage of the coronavirus pandemic at http://apnews.com/VirusOutbreak and https://apnews.com/UnderstandingtheOutbreak