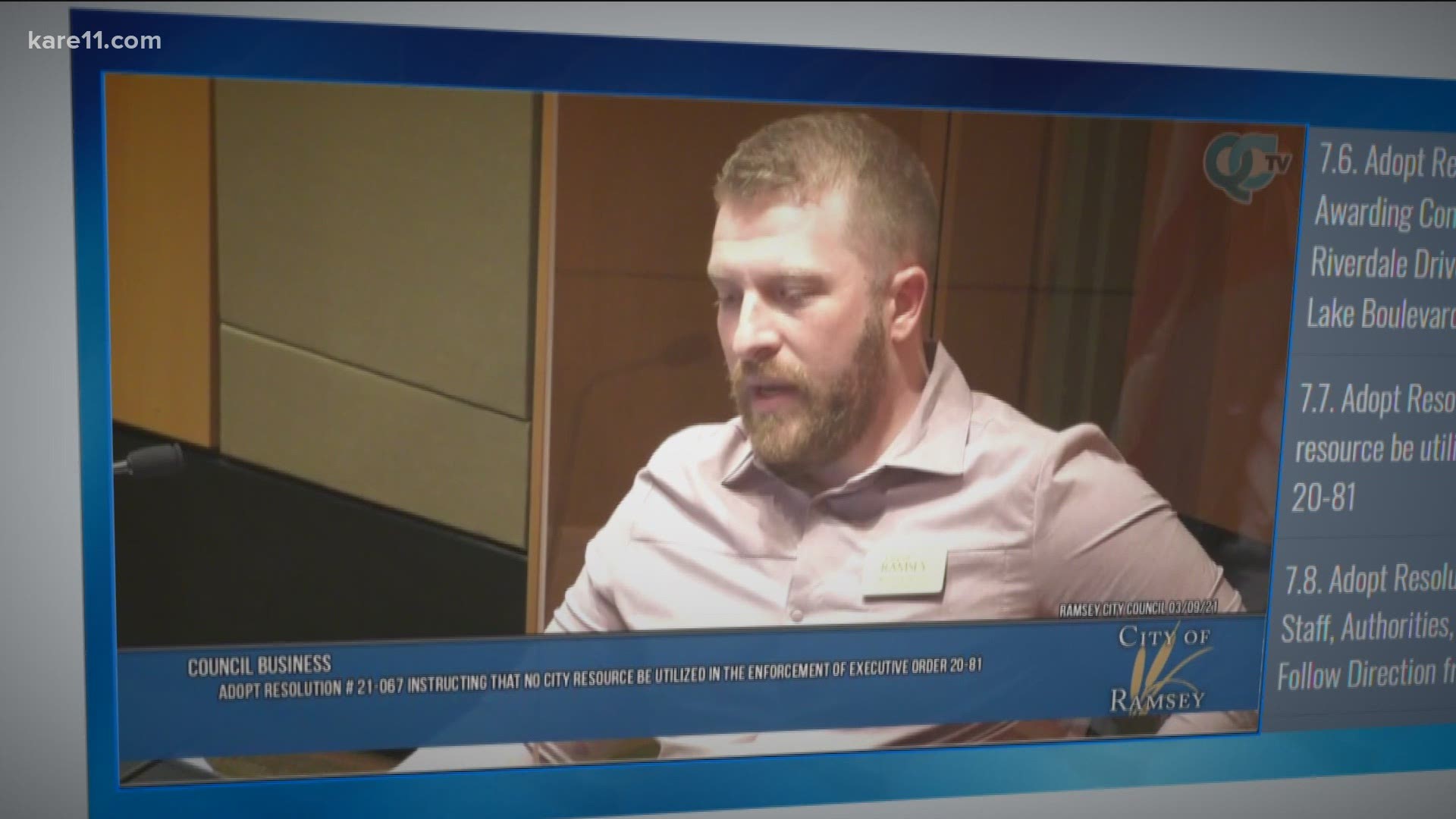 RAMSEY, Minnesota — The Minnesota Attorney General’s Office warned the City of Ramsey that city law does not supersede state law after the city voted to stop enforcing the state's mask mandate Tuesday night.

In what seemed more like a Supreme Court hearing at times, the Ramsey City Council meeting became the latest political forum on the constitutionality of Governor Walz's executive order mandating the use of masks while indoors and in public places for most people.

“It is my opinion that this executive order is contrary to the Bill of Rights. It regulates what the [federal] government and state government can do to residents,” said Ramsey Council Member Ryan Heineman.

He and fellow council member Chelsee Howell introduced a resolution “instructing that no city resource be utilized in the enforcement of Executive Order 20-81."

The council approved it by a vote of 4-3.

“In the entire history of the world, we have never put entire populations of countries or states in masks,” said Howell. “We have not restricted their breathing. There is no precedent for this. How can that not be considered experimental research?”

Other council members and residents disagreed.

“It already is Supreme Court precedent to say states can do this, but even if you don't believe that to be true, this is not the appropriate means for trying to fight that item,” said Dan Kane, a Ramsey resident.

The Ramsey city attorney advised the council a number of times that approving the measure would be outside the authority of the council.

“Whether you pass it or don't pass it, it is my understanding and belief that you can not direct your law enforcement office to not enforce the law,” said the city attorney.

He considered last night's vote particularly harsh considering what he just went through.

“I think it becomes a problem if the bars not abide by the law, and that's where things could get hairy, and opens us up to, I don't know, liabilities I don't know about yet,” said Kuzma.

He said for now, the resolution has no teeth. To enforce it would be to break the law.

The two council members who introduced the resolution couldn't be reached today.

"Every Minnesotan deserves to feel safe in their communities, and it's every Minnesotan's responsibility to stop the spread of COVID-19. Other jurisdictions across Minnesota have recognized the legal and public health rationale for the Governor's executive orders and public health officials agree on the importance of wearing a mask to protect oneself and each other. These executive orders take precedence over the measures passed by any lower unit of government."