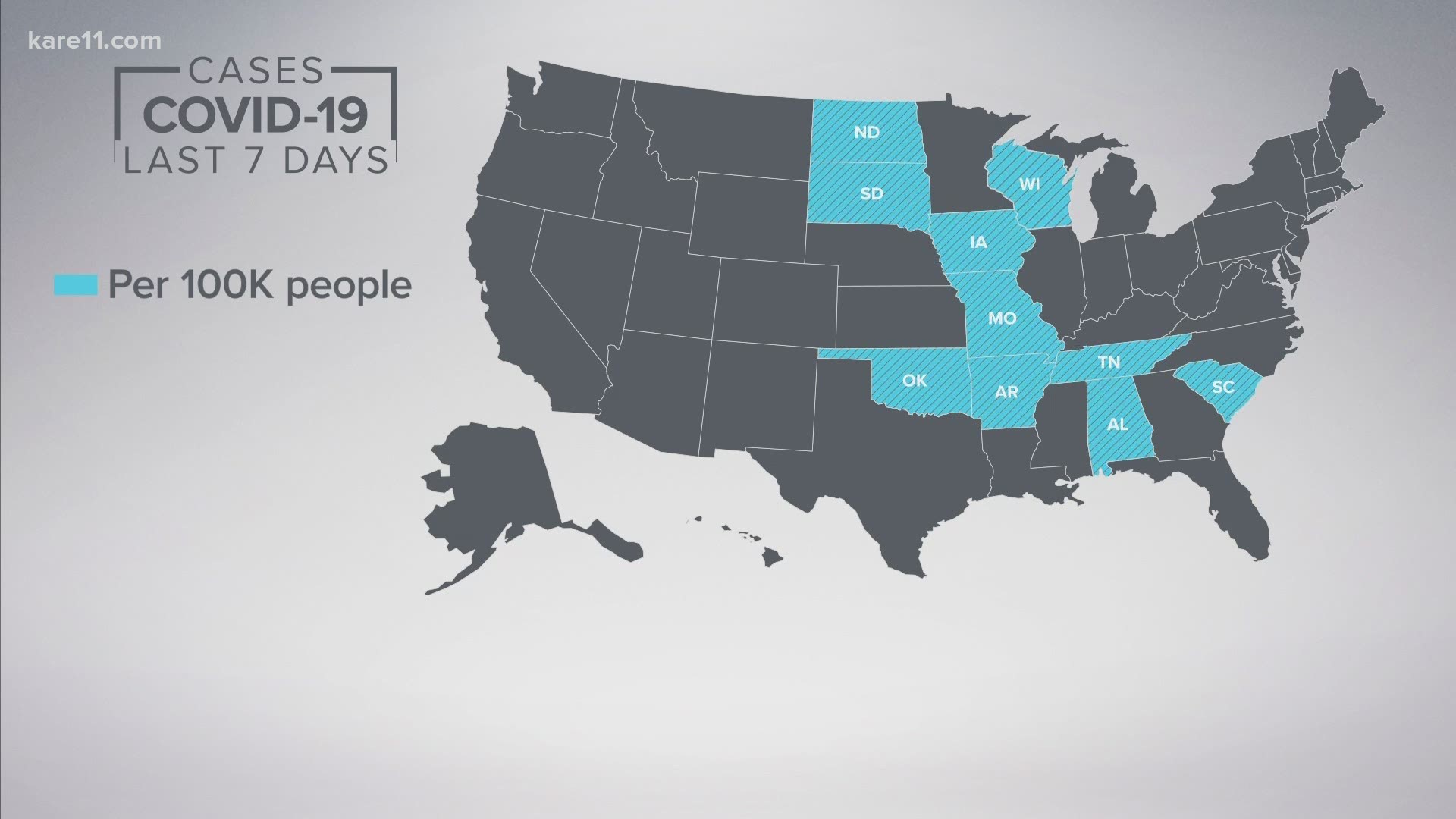 ST PAUL, Minn. — Top health officials in Minnesota sounded the alarm Thursday over rising COVID-19 case totals in the border states of Wisconsin, North Dakota, South Dakota and Iowa, which all rank in the top 10 for per capita case growth over the past seven days.

“We’re nervously watching what is happening in our neighboring states,” Minnesota Department of Health Deputy Commissioner Dan Huff said. “These states are a reminder of how quickly we can go from walking the cliff edge, to tumbling over it.”

Although pure case growth, even calculated per capita, cannot always account for variations in testing volume, it does indicate that the Upper Midwest region has been hit hard by the virus lately. According to a state-by-state tracker designed by the New York Times, the Dakotas lead the country in case growth per 100,000 over the past week, followed by Missouri, Wisconsin, Arkansas and Iowa.

In Wisconsin, health officials again urged the public to comply with the mask mandate, noting that Thursday’s single-day case total was the highest by a “wide margin” and that nearly every county has experienced an issue with the virus.

“This the worst it has ever been in Wisconsin, in terms of the numbers of new cases,” state epidemiologist for communicable diseases Dr. Ryan Westergaard said. “The level of transmission that seems to be going on in the community, really creates a risk if we see this spread into populations that are more vulnerable.”

The return of college students to campus has driven a large portion of the case growth in Minnesota’s neighboring states.

In Fargo, North Dakota State University reported 148 cases in the latest two-week period involving students and faculty. The governor said this week that surveillance testing is underway to track asymptomatic students, with the goal of limiting the spread from younger college students to older populations in long-term care settings.

At the University of Wisconsin, both the La Crosse and Madison campuses have seen COVID-19 spikes as well. At the flagship Madison location, the school reported 127 new positive tests on Thursday alone among students and faculty, totaling an 8.3 percent positivity rate over the past seven days (the figures represent testing done on campus).

The Madison campus also reported its first hospitalization of a student on Wednesday.

“The UW system and a lot of other colleges took a lot of precautions of doing testing, of getting ready to do testing,” Dr. Ryan Westergaard said Thursday, “But it has not, unfortunately, prevented some pretty significant outbreaks.”