Here are the latest developments in the COVID-19 pandemic in Minnesota and Wisconsin. 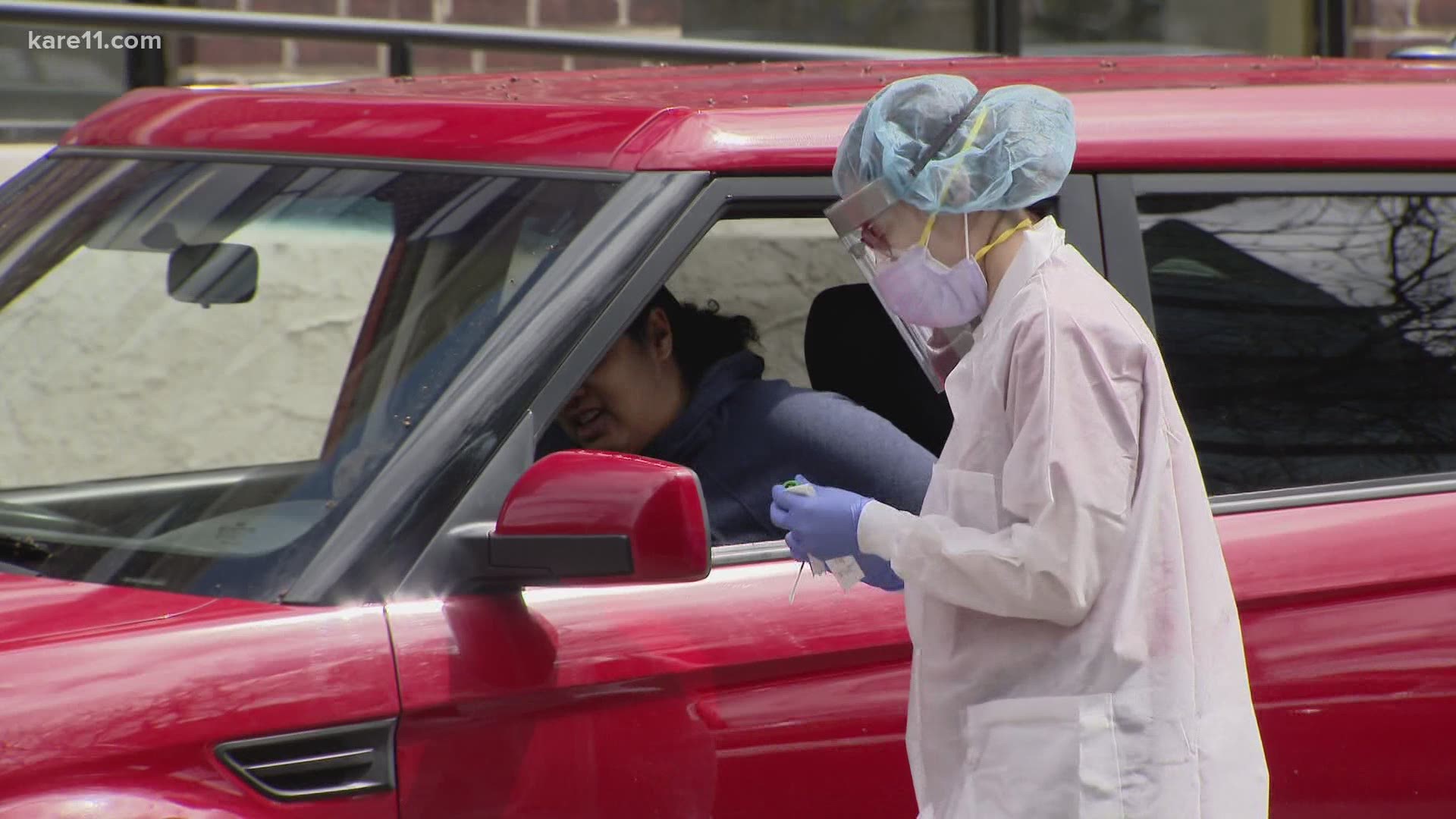 Walz said the state now has the capacity to test 20,000 Minnesotans per day, a "moonshot" testing goal that the governor has been talking about for months. Walz referenced the initiative that the state, the University of Minnesota and the Mayo Clinic announced in late April.

“It put us in a position to be able to have an accurate representation” of the virus’ spread in Minnesota, Walz said.

He said the testing initiative has also allowed them to build up contact tracing after identifying positive COVID-19 cases.

"We’re going to need to be able to test, trace and isolate until we have therapeutics and a vaccine," Walz said. He said he doesn't believe the projected 18-month timeline for that process has changed.

"We've going to have to learn to live with and manage COVID-19 for quite some time," he said.

Walz emphasized that testing does not create more COVID-19 positivity, but more cases are identified when testing rates go up. To develop an accurate picture of the state of COVID-19 in Minnesota, he said his team looks at positivity rates day to day.

“I think Minnesota’s approach to this gives us a greater ability to weather over the long haul," Walz said.

MDH Commissioner Jan Malcolm said in general, state officials are still seeing an "up and down" pattern with new cases. Saturday's most recent "peak" was 520 cases, the largest number since June 4. The 235 cases identified a week before that indicated the most recent "valley," Malcolm said.

Malcolm said Minnesotans should keep in mind that the new cases seen on any given day reflect exposures that occurred two or three weeks ago. For these reasons, she said MDH expects cases to go up soon.

"We’re seeing more social gatherings and we’re seeing second-generation transmissions,” she said. "We are all a part of this transmission chain and we all need to act accordingly."

Malcolm said that being outside helps, social distancing helps, and wearing a mask helps.

"Being outside is a good thing. The risk of transmission outside, the data is becoming more and more clear, how much better that is," she said.

Malcolm urged people to continue to follow public health guidance to protect others they come into contact with.

"This is about the potential, more than the potential, the fact of transmission between people that don't even know they have the virus and other vulnerable people," Malcolm said. "To the extent anyone thinks this is over ... it is most assuredly not."

Currently, Minnesota's case positivity rate is 4.4% on a seven-day average.

Over the last week, Malcolm said, an average of 11,240 tests were performed each day across the state. That volume was an increase of 16.4% from testing the previous week.

“This puts us in a position that many other states don’t have,” Malcolm said. “The ability to actually execute on that goal has been full of challenges for literally every state in the country. I think our progress has been more durable because of the partnership that we’ve established here.”

The state has been encouraging anyone who is symptomatic to be tested, and has posted a map of testing locations online. Malcolm also said that they'll be launching initiatives to do more targeted testing in underserved populations, such as urban and indigenous communities.

When asked about the potential of the state mandating that the public wear masks, Walz said "everything's on the table" and that topic is "coming up."

"I'm serious about talking about it," he said.

Walz said he tends to prefer using the "carrot rather than the stick," but pointed out that wearing a mask has become a political or ideological decision instead of a scientific one.

"If you are for the economy opening up and for the state to take away some of the limitations on your business, the surest way to do that is to wear a mask," he said.

In response to questions about COVID-19 clusters at four Minnesota bars, Malcolm said there are clear requirements that include making sure customers are seated and not standing.

The "enforcement strategy" is typically that complaints are referred to a local law enforcement agency, which sends an officer to check out the situation at the bar or restaurant.

"We’ve been having conversations about how to make sure that that enforcement and that guidance is taken seriously," Malcolm said. "We’re talking about making it more clear to establishments what the consequences of failure to comply is."

Malcolm said if the state sees more clusters, that could lead to "stronger mitigation measures."

"That educational approach doesn’t seem to be having all the impact that we want it to,” Malcolm said.

"At some point in time the carrot turns to a stick to stop this thing," Walz said.

Ten new deaths have been reported as well, the first time the daily death toll has surpassed single digits in over a week. The total deaths in the state since the pandemic began now stand at 1,435. Of those, 1,129 have happened in long-term care or assisted living.

The new cases reported Monday were identified out of a testing volume of 7,522 on Sunday. Testing numbers for early in the week tend to be lower because fewer samples are submitted over the weekend. By comparison, Saturday just over 15,000 tests were completed across the state, according to MDH.

According to MDH, 278 people are currently hospitalized due to COVID-19, with 140 of them in the ICU. Those numbers have been staying steady or trending downward in recent weeks. Monday's total hospitalizations are the lowest they've been in two months.

Minnesotans between the ages of 20 and 29 now make up the largest number of COVID-19 cases by age group, since they surpassed those in their 30s on Thursday. There have been 7,514 confirmed cases among people in their 20s as of Monday.

MDH has expressed concern that young adults are not taking COVID seriously, and Friday they announced that four COVID-19 clusters have been linked to four bars in Minneapolis and Mankato.

Although positive cases are higher among young adults, deaths are more frequent among older people. Of those ages 80-89 in Minnesota, only 1,554 cases have been identified, but 491 people have died. Only two people in their 20s have died, according to MDH.

The Wisconsin Department of Health Services (WDHS) reported no new deaths statewide on Sunday in connection with the coronavirus.

Since the pandemic began, 777 people have died in Wisconsin - or 3% of the total reported cases.

Health officials reported 418 new positive cases, bringing the total number of cases throughout the state to 27,743 since the pandemic began.

3,393 Wisconsinites have been hospitalized due to complications from the virus, or roughly 12% of total reported cases. The department reports the state is currently handling roughly 239 total COVID-19 patients, with 89 of those requiring intensive care.

A majority of Wisconsin's COVID-19 cases - similar to Minnesota's - tend to skew toward the younger demographics between the ages of 20 to 59 (though an increase in age bracket typically entails a decrease in share of cases).

By comparison, those 60 years and older represent a much smaller percentage of the state's total reported cases, but represent a majority of its death count.

You can find more detailed statistics by visiting the Wisconsin Wisconsin DHS website.

The Minnesota Department of Health (MDH) reported 523 newly confirmed COVID-19 cases Sunday as people in their 20s continue to make up the most positive cases in one age group.

Health officials also reported eight new deaths due to complications from the virus, the eighth straight day of single-digit deaths. The total number of deaths in the state is now at 1,425 since the pandemic began, including 1,123 that have occurred in long-term care or assisted living settings.

The total number of Minnesotans who have tested positive for the virus since the pandemic began to 35,549.

The total number of tests processed by private or state labs has reached 585,417.

Minnesota hospitals are currently treating 288 patients for the coronavirus, with 143 of them dealing with symptoms serious enough to require care in the ICU.

MDH reports that 30,809 people once diagnosed with the virus have recovered enough that they no longer require isolation.

Of those who have tested positive, people between the ages of 20-29 account for the most cases, with 7,388 cases and two deaths and people ages 30-39 follow closely with 7,047 cases. Those between 80 and 89 years old account for the highest number of fatalities in one age group, at 490, out of 1,552 confirmed cases.