Live updates: 3 million vaccines have been administered in Minnesota

Here are the latest developments on COVID-19 spread and vaccine progress in Minnesota and Wisconsin. 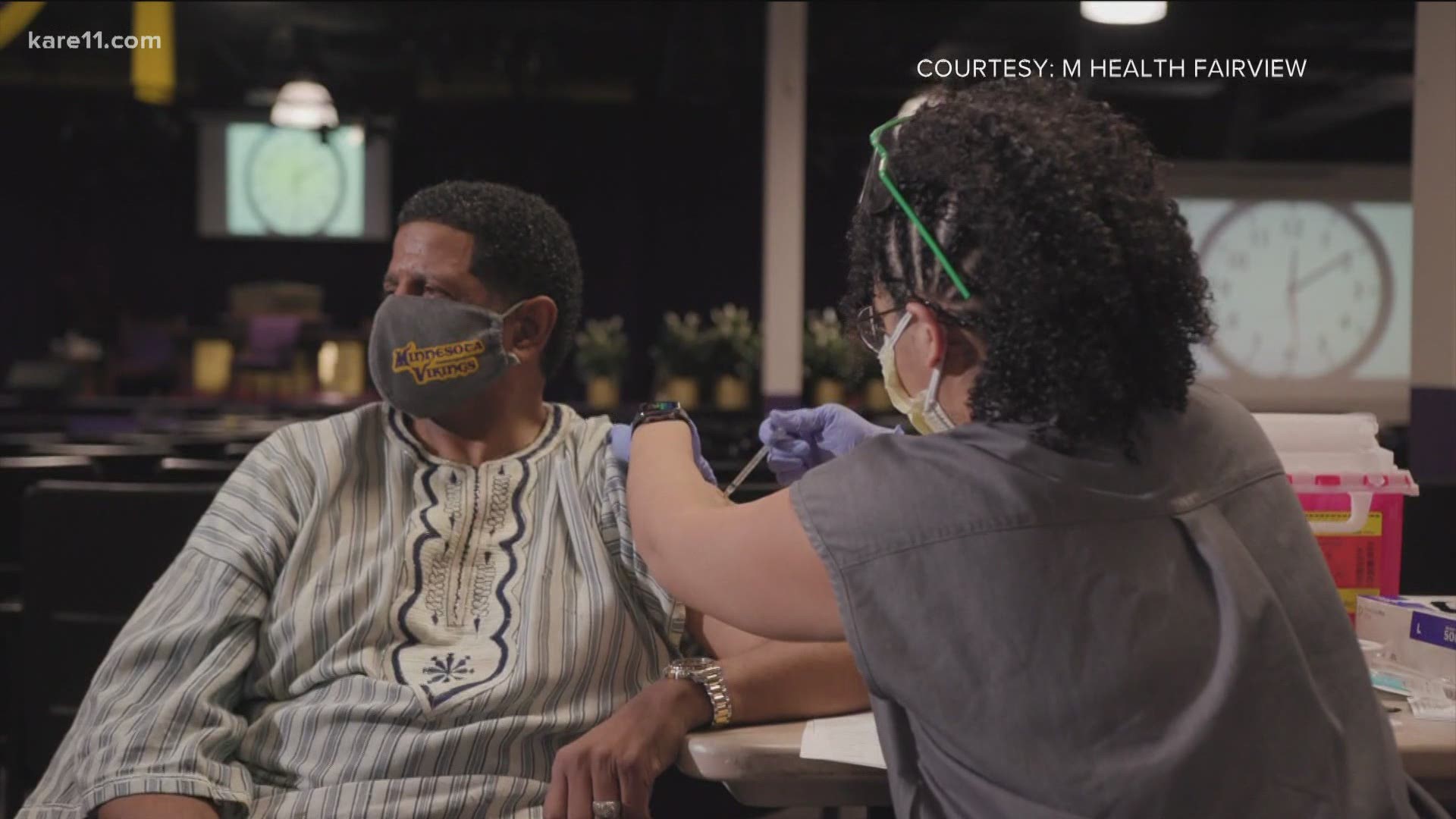 Minnesota Department of Health officials gave an update on rising COVID-19 cases and hospitalizations after the state's 3 millionth vaccine dose was administered Thursday.

Dr. Ruth Lynfield, the agency's medical director and state epidemiologist, said roughly 50-60% of Minnesota's COVID infections are linked to the B.1.1.7 variant, which was first identified in the United Kingdom.

The state reported 1,573 cases of the variant as of Thursday, with 4% of the patients hospitalized. Five of those infected have died.

Minnesota health officials have also identified more of the two variants first reported in California, B.1427 and B.1429. Dr. Lynfield said the state has identified 337 cases of these variants, with 2% of patients hospitalized. Two of those infected have died.

Lynfield warned Minnesotans that the variants are spreading, and residents need to be careful while more people get vaccinated.

Imam Hassan Jama, executive director of the Islamic Association of North America, also joined state health officials during the briefing Thursday to clarify how to handle getting vaccinated as Ramadan approaches.

Jama said a vaccine doesn't constitute breaking your fast since it's neither food nor drink. He also said those who receive a vaccine during Ramadan can break their fasts should they experience symptoms and need to take care of themselves.

Jama said his group has outlined how to gather in groups during the evenings to limit the spread of COVID-19, and that community leaders are "working very hard to have a peaceful Ramadan."

Governor Tim Walz and Lt. Gov. Peggy Flanagan are praising the state's milestone of three million vaccine doses administered as of this week.

“This was our fastest million doses yet and, with fans in the stands at Target Field, the signs are all around us – spring has arrived, normalcy is near, and we are going to end this pandemic," Gov. Walz said in a statement. "As we continue our critical work to immunize for impact and prioritize our most vulnerable neighbors, it’s important we continue to protect each other from the virus – keep that mask up, socially distance, and get tested when needed.”

“As the pace of vaccination rises, we are doubling down on our efforts to ensure that every Minnesotan who wants a vaccine can get one,” Lieutenant Governor Peggy Flanagan said. “We are partnering directly with communities across the state to distribute vaccines quickly and equitably. We cannot let our guard down now, but we are almost to the other side of this pandemic.”

According to the governor's office, the state of Minnesota is leading the nation in doses administered.

Minnesota crossed another milestone in its COVID-19 vaccination efforts this week, with the three-millionth dose of vaccine administered on Wednesday, according to the Minnesota Department of Health (MDH).

An MDH online database shows a total of 3,048,429 doses of vaccine have been administered thus far. Of that total, more than half (51.2%) were the two-dose Pfizer version of the vaccine, followed by Moderna's two-dose vaccine (45.3%). About 3.4% of vaccinated Minnesotans have received the single-dose Johnson & Johnson vaccine.

The latest MDH vaccination totals show that as of Tuesday, 1,900,248 Minnesotans age 16 or older had received at least one dose of a COVID-19 vaccine, representing about 43% of the state's 16+ population. More than 1.2 million Minnesotans had completed their vaccine series as of Tuesday.

Meanwhile, hospitalizations from COVID-19 continue to rise in Minnesota, with the MDH reporting 565 hospitalizations as of Wednesday. Of those patients 131 are receiving care in the ICU.  The totals mark the highest number of people hospitalized with COVID-19 since Jan. 19 (570).

Thursday's update from MDH showed 2,535 new COVID-19 cases in the state. That marks an increase from Wednesday's numbers (2,004); however, there was also a sharp increase in the number of tests conducted between Wednesday (25,885) and Thursday's reports (44,111).

Thursday's MDH report also noted 14 additional deaths attributed to COVID-19, bringing the total number of deaths from the coronavirus to 6,922 since the onset of the pandemic in March 2020.

More than 535,000 COVID-19 cases have been reported in Minnesota since the pandemic began.

Governor Tim Walz and other Minnesota officials are meeting at a community vaccination site to give more information on a campaign to vaccinate food service workers and people in other critical industries. You can watch live above.

According to a press release from Walz's office, this outreach effort is part of the larger "Roll Up Your Sleeves" campaign. It focuses on getting people in targeted industries to sign up for the state's Vaccine Connector tool.

In its first week, the campaign is focusing on food service workers. Walz said Minnesota has partnered with industry leaders, employers, and influential Minnesotans like Chef Andrew Zimmern, a restauranteur and TV personality.

"Every worker is essential," Walz said. However, he said industries like food service have a high risk of COVID-19 spread due to in-person contact, so the state wants to make sure those workers can get vaccinated.

A number of local food service leaders spoke at the event, giving accounts of what they are doing to get workers vaccinated like monetary payments and employee vaccination events.

Walz also answered questions about the state's COVID-19 response. Asked whether the state would set benchmarks for a full reopening, he said Minnesota is getting closer to a point where that could happen. He said coming large gatherings like sports events will help give a clearer picture of the state's current situation.

"The reality of it is, we know more about this now, we have more robust testing, we have more vaccines in arms." He said vaccines are changing the equation, but rising hospitalizations are still a concern.

After Wednesday vaccinations at TCO Performance Center were canceled due to weather damage, Walz said those appointments are being moved to the U.S. Bank Stadium.

Asked about vaccine passports -- apps or documents proposed for showing that a person is vaccinated -- Walz said he had "no intention" to use them in Minnesota.

You can watch the full event below.

Minnesota's hospitalizations due to COVID-19 are higher than they've been in months, reflecting concerns voiced in recent days by top state health officials.

Data released by the Minnesota Department of Health (MDH) says as of Tuesday, 538 people were being treated for coronavirus in hospitals across the state, including 138 people in ICU. That's the largest number of single-day hospitalizations since January 22, when 546 were hospitalized with COVID.

Bed availability reflects that trend as well. Currently only 55 non-ICU beds are open across the Twin Cities hospital system, a 1.5% vacancy rate.

MDH spokesman Doug Schulz says department epidemiologists believe the increase in hospitalizations (and cases) is being driven by the B.1.1.7 variant, which could be responsible for as much as 50% of the state's new cases. State Epidemiologist Dr. Ruth Lynfield said last week that the B.1.1.7 variant is 50% more contagious, and in the U.K has shown to have a 64% higher death rate for those who contract it.

"The percentage of cases that are ending in hospitalizations is also trending up in all age groups," explained MDH Commissioner Jan Malcolm Tuesday, "so part of what we have been concerned with, with the variant is that it's easier to transmit, but also evident is that other counties who have studied this (the B.1.1.7 variant) have found the virus to potentially lead to more serious disease, and we are seeing that."

The department recorded 2,004 new COVID infections in the past day, but noted Tuesday that a reporting lag by at least one private lab could make Wednesday's case numbers artificially higher. New case numbers are based on 25,884 tests (21,041 PCR, 4,843 antigen) processed in private and state labs.

Total cases in Minnesota are now at 532,658 since the beginning of the pandemic, with 31,955 cases based on antigen tests.

Of those who at one time tested positive for the virus, 509,834 people have recovered to the point they no longer require isolation.

Another 19 Minnesotans lost their lives to COVID, bringing total fatalities in the state to 6,908. Of those deaths, 4,298 (62%) are connected to long-term care or assisted living settings.

The last time single-day deaths were this high was March 11, when 19 deaths were also reported.

While case and hospitalization numbers continue to trend up, so does the number of Minnesotans getting vaccinated. As of Monday 1,871,809 people had received at least one dose of vaccine, 42.4% of eligible state residents age 16 and up. MDH says 1,218,484 people (27.6%) have completed the COVID series, meaning they are considered fully vaccinated.

Cook County has reported the least COVID activity with just 142 cases since the start of the pandemic, but it is also 82nd out of Minnesota's 87 counties in population.