KARE 11 Investigates: COVID becomes leading cause of death in Minnesota 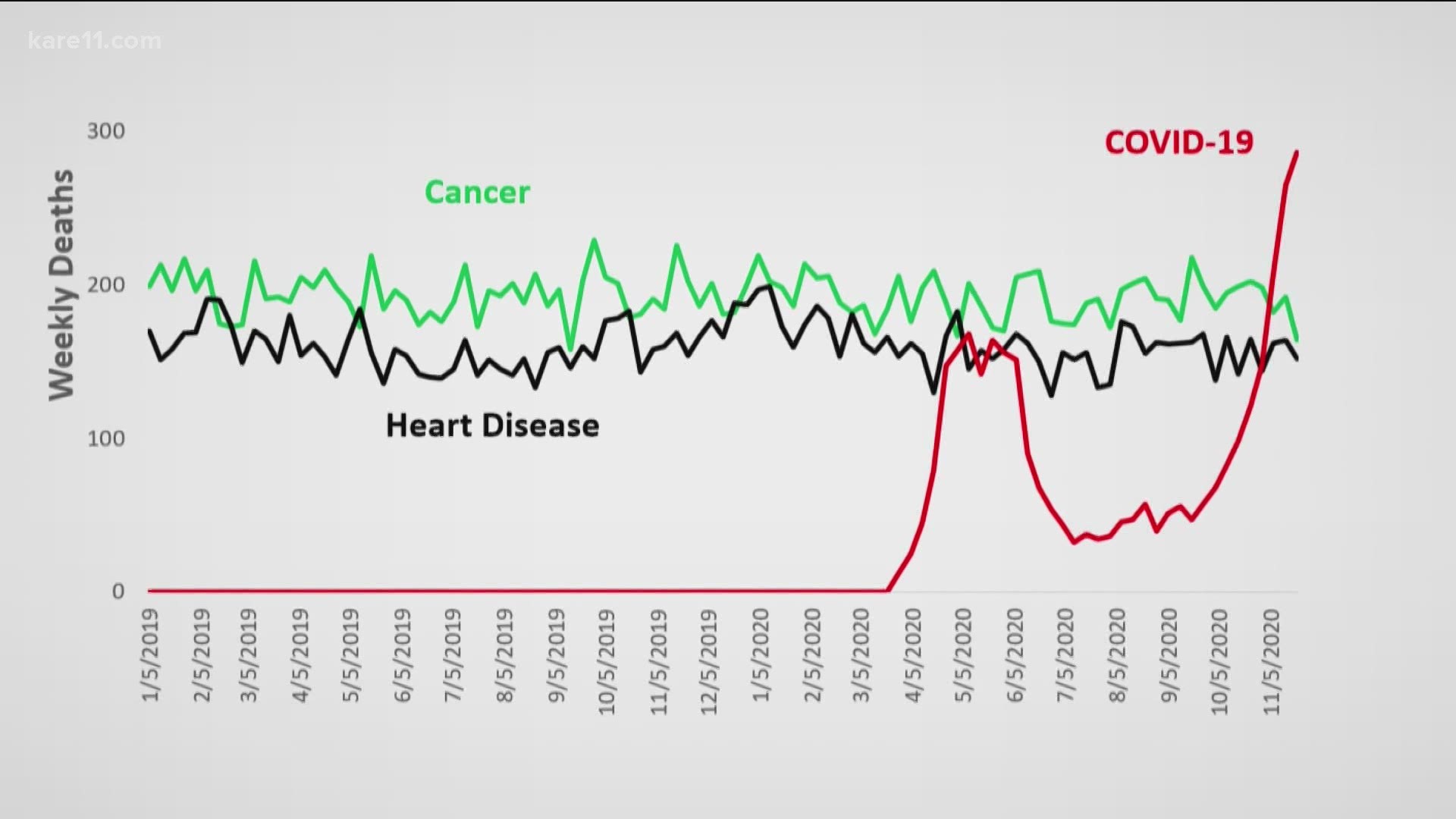 The coronavirus has become the leading cause of death in Minnesota, a KARE 11 analysis has found.

Typically, cancer and heart disease are the leading causes of death in the Minnesota, causing an average of 191 and 160 deaths each week in 2020.

COVID became the leading killer in the state in early November, with the virus listed as a cause or underlying cause of an average of 300 deaths a week from Nov. 7 to Nov. 28, according to an analysis of data from the Centers for Disease Control.

COVID-19 has also caused the most significant, sustained increase in excess deaths in the state in decades – meaning there have been far more deaths than the number normally expected in Minnesota, according to the CDC data.

The last time such a spike was seen was during the 1918 flu pandemic, said Rob Warren, a University of Minnesota sociology professor and Director of the Minnesota Population Center.

“This is unprecedented in our lifetimes,” said Warren, who confirmed KARE 11’s analysis.

The CDC’s data comes from state reports. It typically takes about two weeks for the totals to be released to the public.

Using Minnesota’s most up-to-date daily reports, COVID has remained the leading cause of death into December, after more than 400 were reported in the last week, a record high.

COVID has also become the leading cause of death nationwide, according to a University of Washington report, overwhelming hospitals across the country and Minnesota.

In the metro, where only about five percent of ICU beds are available, health care workers have begun pleading for the public to take precautions seriously.

The CDC data also undercuts arguments by skeptics who believe that COVID deaths are being artificially inflated or misclassified, or that the disease has not been as serious as has been reported.

The data shows significant increase in “excess deaths” during the spike in May and again since early November.

Month after month, year after year, Minnesota generally sees the same number of deaths. But in 2020, Minnesota has seen anywhere from 1,700 to 3,900 more deaths this year than would be expected when compared to previous years.

Credit: Centers for Disease Control
The number of excess deaths in MInnesota -- more dying than would be expected -- is up significantly due to COVID-19.

Warren said there is only one explanation: COVID, because death rates from other diseases have remained relatively unchanged.

“There is no other real rational explanation,” Warren said. “The broad brush conclusion is COVID has killed thousands of people in Minnesota in 2020, and hundreds of thousands of people in America in 2020. So, while there’s room for debates around the details, there’s really no room for logical or empirical debate about the impact that COVID has had on deaths in America and in Minnesota.”