A pharmacy pilot program is trying to figure out the best and most accessible way to distribute COVID-19 vaccines to rural areas. 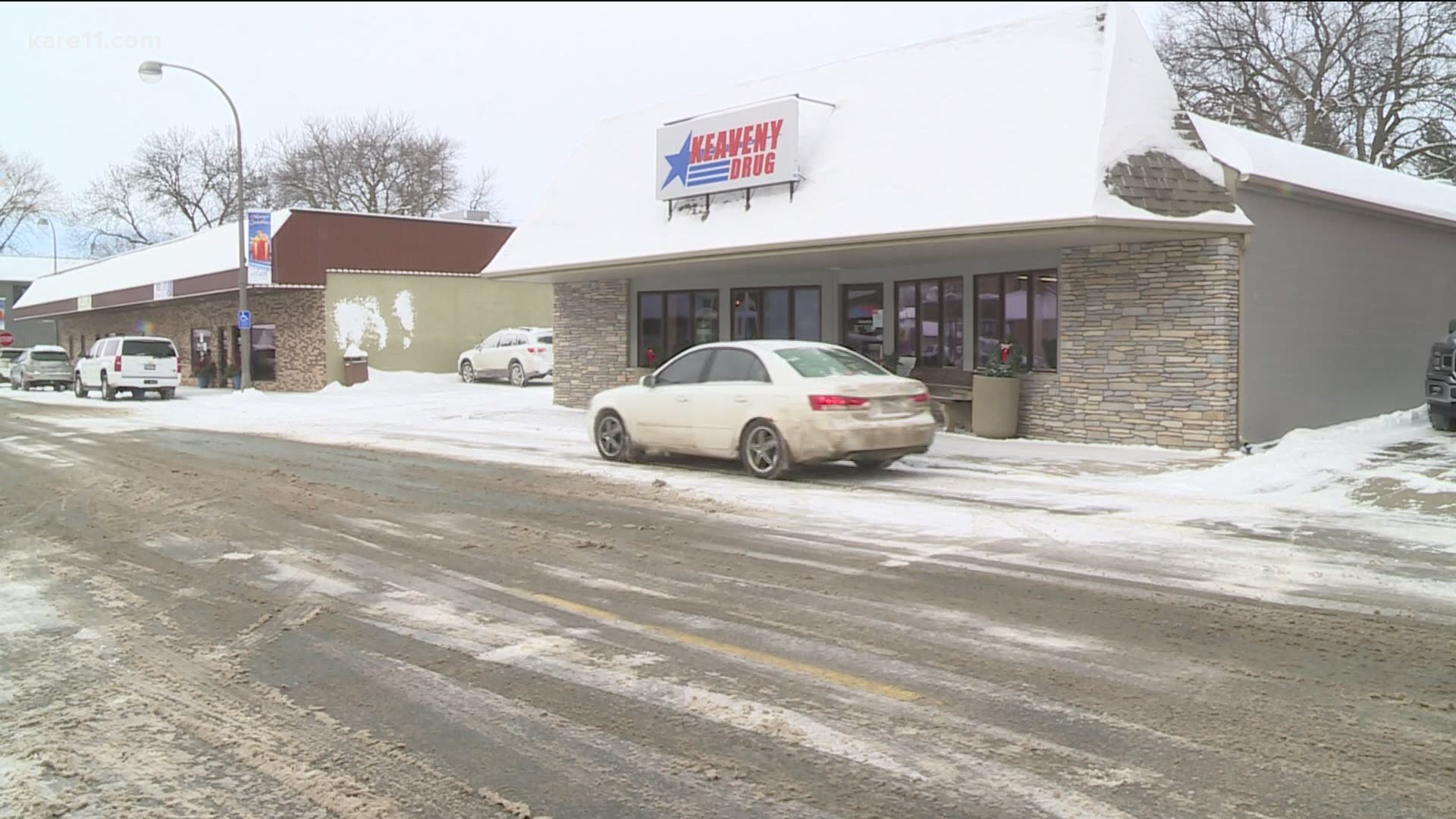 WINSTED, Minn. — Keaveny Drug Pharmacy in downtown Winsted is the kind of place where you can fill your prescriptions with friendly staff who know your name and also pick up a few other things along the way.

Fran Eggert said he was at the pharmacy earlier this week to pick up a sympathy card for a friend, and then curiosity got to him.

"I just happened to ask-- when do you guys think you'll be getting it?" he said, referring to the COVID-19 vaccine. "And they said well just wait a minute, how about Thursday?"

Chance and Eggert's curiosity brought Fran and his wife Jan back to Keaveny Drug on Thursday, where they sat in two chairs, waiting for their COVID-19 vaccine.

Normally, vaccinations happen in the back room, behind closed doors, but the Eggerts were kind enough to share their experience with us, publicly.

"We were so excited that we could get it," Jan said. "We thought we were going to have to wait for quite a while yet we were in that lottery-- we signed up for the lottery but there were so few vaccines available. We just didn't think that would happen, for quite a while. So we're just very thankful to Deb."

Jan is referring to Keaveny owner Deb Keaveny. It's been a long week for her as she navigated the complex system of being one of 19 pilot pharmacy sites with vaccines available.

She said the week did start out with a little frustration, when the pilot launched.

"It seems like things are changing quite a bit," Keaveny said. "Everyday it seems like there's a different plan, first we have the pilot programs, and some in some of the pharmacies, and seniors are frustrated because they just don't know how to navigate where they can go."

Keaveny added that she missed out on some communication in the beginning of all of this.

"Vaccine finder hadn't been published until last Monday, that told folks where the vaccine was, the problem is we didn't get a heads up that it was going live," she explained. "So we didn't know, all of a sudden we got phone calls coming in like crazy, emails, people trying to book appointments, and it took us about a day to get our feet back underneath us and trying to help people figure out what's going on.

"We also had a small chain North of the cities that actually had over 5,000 calls among their five pharmacies," Derr said. "We were very surprised by the number of people interested in the vaccine. We were very happy about it, because that's not usually the response we get, but it's also very tough for us to continue to do our daily jobs."

However, Derr said these are growing pains as the state mobilizes community clinics to maximize accessibility.

"95% of patients live within five miles of a pharmacy," she said. So they could be going to their clinics and passing three, four, five pharmacies. Whereas they could be getting their vaccines right at their pharmacy. And many patients are used to getting their vaccine at the pharmacy. They go there for their flu shot and other vaccines. That's another important piece too-- we're a known provider for giving vaccines."

Derr said while she understands everyone's worried that they might be forgotten about, or skipped over, the best way to help pharmacists help you is to get on just one waiting list instead of calling around and putting your name on multiple lists.

She said that way, everyone saves time and resources.

She also said the pilot program is going well, and depending on what the Minnesota Department of Health tells them in terms of supply next week, the program could expand to include more pharmacies.