The governor said he believes mask compliance could help get kids back into the classroom this fall. 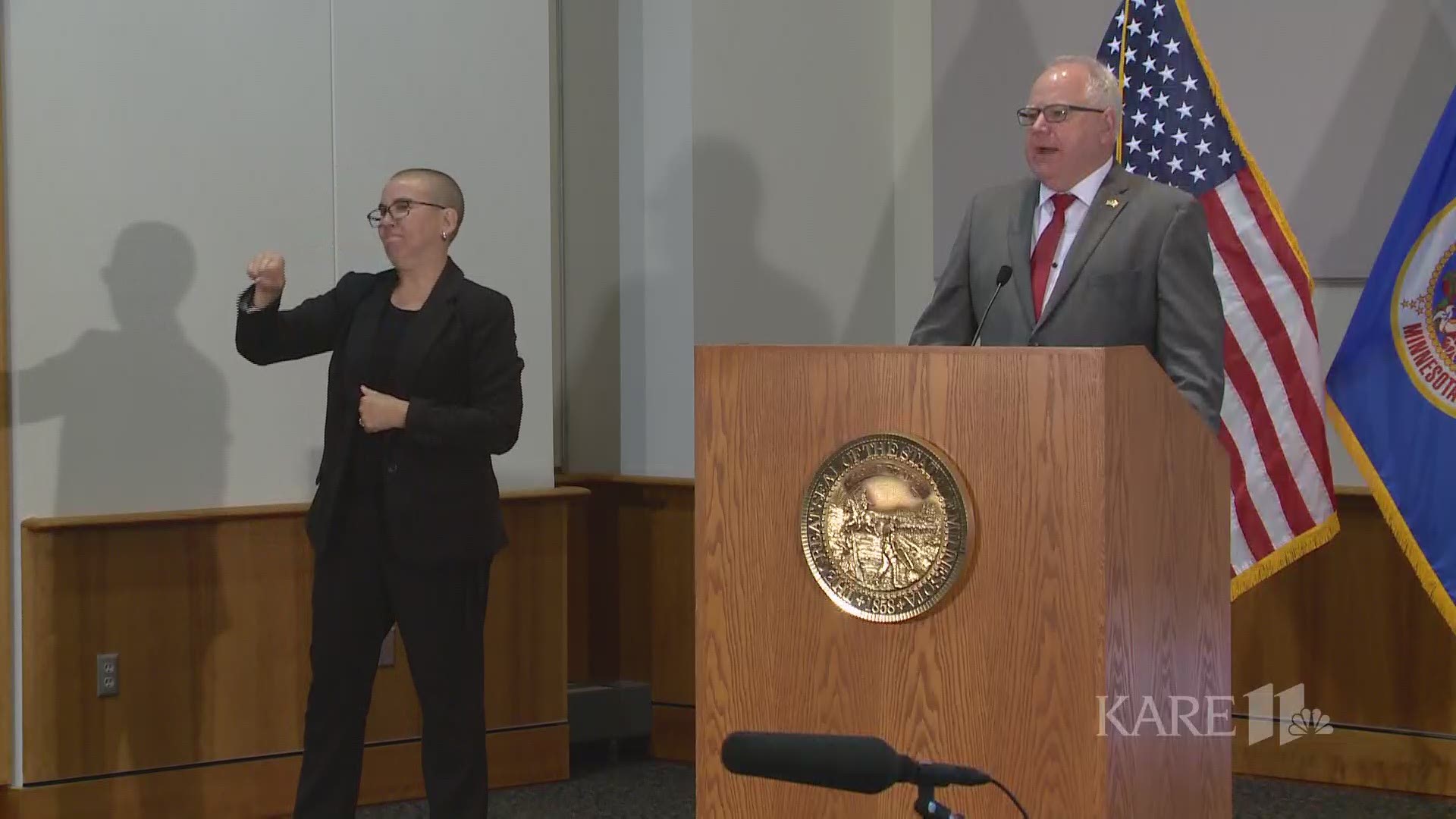 ST PAUL, Minn. — On Wednesday Gov. Tim Walz and Lt. Governor Flanagan and other state health leaders will announce the next step's to Minnesota's response to COVID-19, according to a press release.

A spokesperson for the governor confirmed that Walz will announce whether or not Minnesota will join other states across the U.S. in mandating face coverings in public places.

Walz said last week that he is "seriously considering" requiring face coverings across the state. The governor said Tuesday that he was trying to get Republican lawmakers to support such an action, hoping to have the action made by the legislature rather than by executive order, but "they're not willing to do it."

"That’s one of the reasons why Chapter 12 is there," Walz said, referring to his ability to issue executive orders. "I think you can expect an announcement ... in the next day or two."

Walz addressed questions about a mask mandate on Tuesday at a news conference focused on COVID-19 in long-term care facilities. He said that businesses have been telling his administration that they support a mask mandate.

"They don’t want to have to battle people coming in," he said. "It just makes it clear across the board."

RELATED: Where are face masks required in Minnesota?

In a change of messaging Monday, President Donald Trump tweeted a picture of himself wearing a mask, calling it patriotic.

We are United in our effort to defeat the Invisible China Virus, and many people say that it is Patriotic to wear a face mask when you can’t socially distance. There is nobody more Patriotic than me, your favorite President! pic.twitter.com/iQOd1whktN

Walz praised the president for the move, along with businesses and mayors that have instituted their own policies.

"Getting people to buy into wearing the mask is what you’re trying to do," he said. "The mandate is not to punish people, it’s to put the emphasis behind doing that. And what I’ve said is if the president wears a mask, you will instantly see 10% of the public or more go up and do this. We know by the research that a mask mandate adds about 25% to this."

Walz said his administration believes that if Minnesota reaches 90-95% mask compliance for the next four to five weeks, the numbers will allow the state to "maintain and continue to open."

RELATED: What science says about masks

While Walz said he thinks there is a good argument to be made for "regionalism," meaning the mandate would be different from county to county, he said he thinks that approach is flawed. Walz implied that Minnesota Department of Health (MDH) Commissioner Jan Malcolm agrees.

"We see it across the country, you tend to get a bleed over," he said. "Because OK, so you don’t have one in St. Louis County? Well, everyone goes to St. Louis County from other places."

Walz said his message for people who say the Minnesota economy needs to open is this:

The governor finished, "If we wear masks and social distance we can do all of those things in addition to getting kids back in school."

Walz has said in addition to a decision on masks in the next day or two, he will have a decision on whether students are going back to classrooms this fall the week of July 27.

RELATED: Guidance for masks in schools varies widely across US states

RELATED: Coronavirus under control in 8 weeks if everyone wears masks, CDC director says