The governor made the announcement Wednesday while also laying out a strategy for in-person learning at elementary schools. 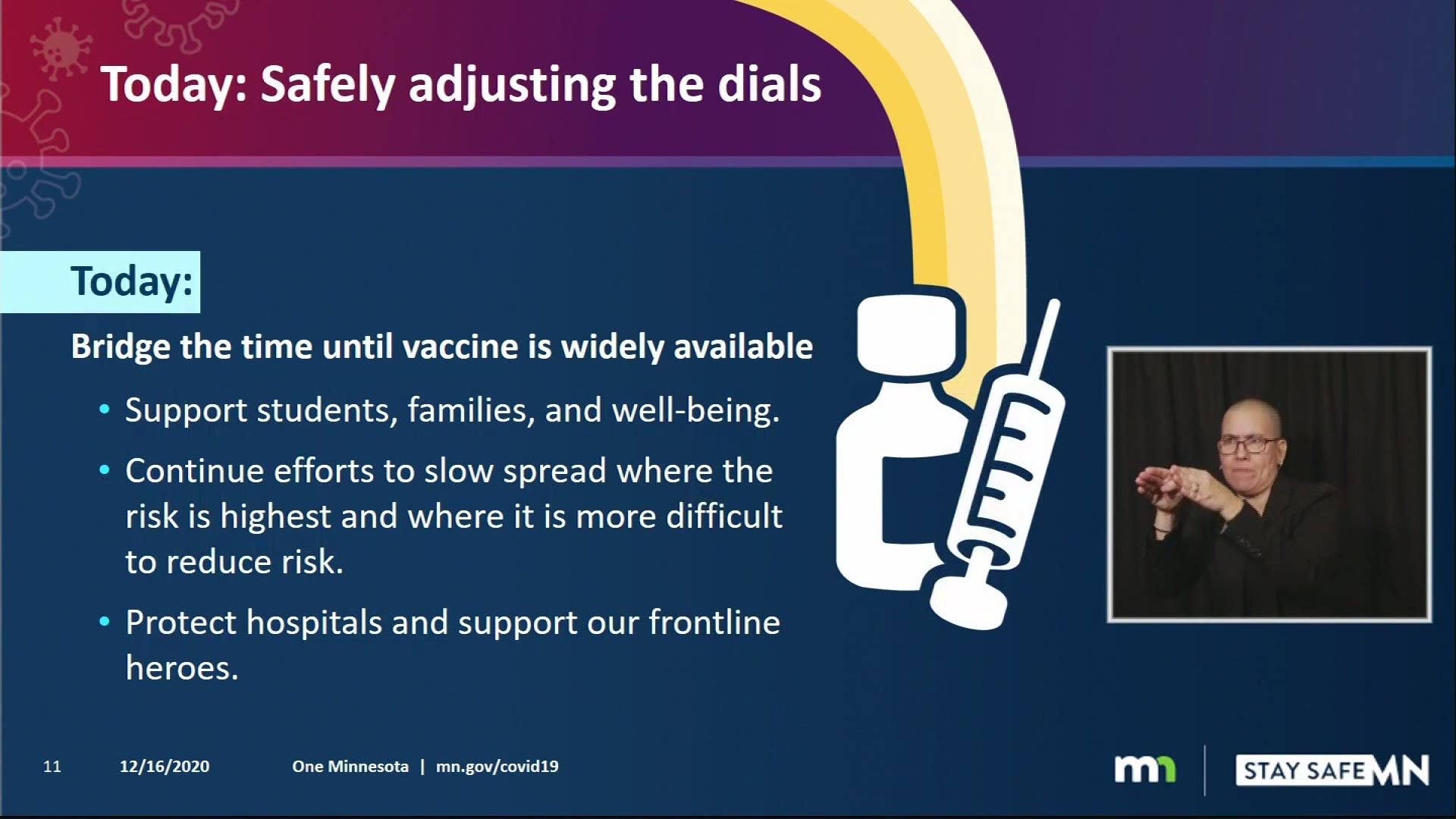 ST PAUL, Minn. — Gov. Tim Walz announced the state's next steps in the battle against COVID-19 Wednesday afternoon, which include allowing elementary schools to opt for in-person learning in January, and allowing bars and restaurants to offer outdoor dining.

Walz's plan aims to reopen schools for young children, and to keep hospital capacity from overflowing.

“The sun is rising across Minnesota. Vaccines have arrived and the light at the end of the tunnel is much brighter today than it was at the beginning of this four-week dial back,” Walz said. “There is strong evidence we are starting to turn a corner thanks to the hard work of Minnesotans over the last few weeks to keep each other safe. But we aren’t out of the woods yet. This way forward will help bridge the gap to vaccination by continuing to protect hospital capacity while prioritizing getting our kids back in the classroom and supporting Minnesotans’ quality of life.”

Walz updated the Safe Learning Plan to allow elementary schools across the state to operate with in-person learning plans starting Jan. 18, 2021 if they choose to do so, as long as mitigation measures are put in place, including offering regular testing and requiring staff to wear face masks.

Walz is extending the pause to indoor dining but will allow bars and restaurants to have outdoor dining with 50% capacity or up to 100 people. The pause on indoor dining across the state went into effect on Friday, Nov. 20 as part of a four-week dial-back plan that was set to expire Friday, Dec. 18.

Gyms and fitness studios will now be open for individual exercise at 25% capacity, or up to 100 people. People will be required to wear masks and be 12 feet apart. There will be additional guidance for group classes on Jan. 4.

Youth sports will be able to resume Jan. 4, and additional guidance will be released.

Indoor social gatherings continue to not be recommended but "Minnesotans may gather inside with one other household up to 10 people," guidelines state. If outside, social gatherings may include two additional households, and up to 15 people starting Dec. 19. Masks and social distancing are strongly encouraged.

Outdoor entertainment spaces will be allowed to open at 25% capacity, or up to 100 people. If food and drinks are served, people must be seated.

Indoors entertainment spaces are to remain closed until Jan. 11

In response to the governor's announcement, House Republicans were critical of continued restrictions on bars, restaurants and youth sports.“The Governor needs to allow our businesses to safely reopen their doors, and stop punishing our hospitality industry when the data does not support their continued closure,” said House Minority Leader Kurt Daudt. “Minnesota started a downward trend before restaurants were forced to close, and the governor’s own data shows that only a fraction of a percent of all cases can be tied back to bars and restaurants.” In a statement, House Republicans said the additions of outdoor dining and limited gym openings under the updated plan are "too little, far too late" for some businesses.

Senate Majority Leader Paul Gazelka issued a statement in response to Walz's decision, saying, "If Governor Walz thought people wanted a matrix of rules and guidelines to follow to reopen, he's severely mistaken. People will follow simple, commonsense rules to keep each other safe, allow them to operate their business, and get kids back in schools. Thousands of businesses had no problems before, but Walz shut down every single one of them anyway."
Gazelka argued that the data doesn't support the modified restrictions Walz announced.
"Let the businesses and employees who were keeping people safe go back to their jobs with simple, easy to follow guidelines," Gazelka wrote in his statement.

In a statement released Wednesday morning ahead of the official announcement, Hospitality Minnesota said the group was "gravely disappointed" by reports of extended closures through the holidays.

"Since March, we have been at the table, in good faith, making the case that hospitality businesses are able to operate safely, balancing public health and economic viability," said Hospitality Minnesota President and CEO Liz Rammer. "The state’s very own data supports our case, and they have been unwilling and unable to show us the analysis that says otherwise."

Hospitality Minnesota is sending a letter to Gov. Walz, asking him to allow businesses to open up to 50% capacity when the current pause expires on Friday.

"The tide is turning, as we have witnessed all week as more and more businesses are willing out of desperation to risk fines and penalties to save their livelihoods," Rammer said. "Hospitality is a force for good in our communities, and the Governor and his administration would be wise to leverage that force, rather than watch it flicker out."

Some local business owners banded together and formed the ReOpen Minnesota Coalition. They have vowed to open their doors on Wednesday and Thursday regardless of the governor's mandates.

Gov. Walz called the seventh special session of 2020 this week to address the state's plan moving forward in regard to the pandemic. On Monday, the Minnesota legislature passed a new $216 million COVID-19 relief package, which includes direct aid to businesses affected by the lockdown and a 13-week extension on unemployment insurance for jobless workers.

On Wednesday afternoon, Gov. Walz is scheduled to sign the relief package into law.

It will be distributed as follows:

The unemployment benefits will only kick in if Congress fails to act before federal jobless benefits expire Dec. 26.