Walz: All Minnesotans 16 and up eligible for COVID vaccine March 30

"This does not mean you're necessarily going to get this next week," Gov. Tim Walz said. "It means you're in line." 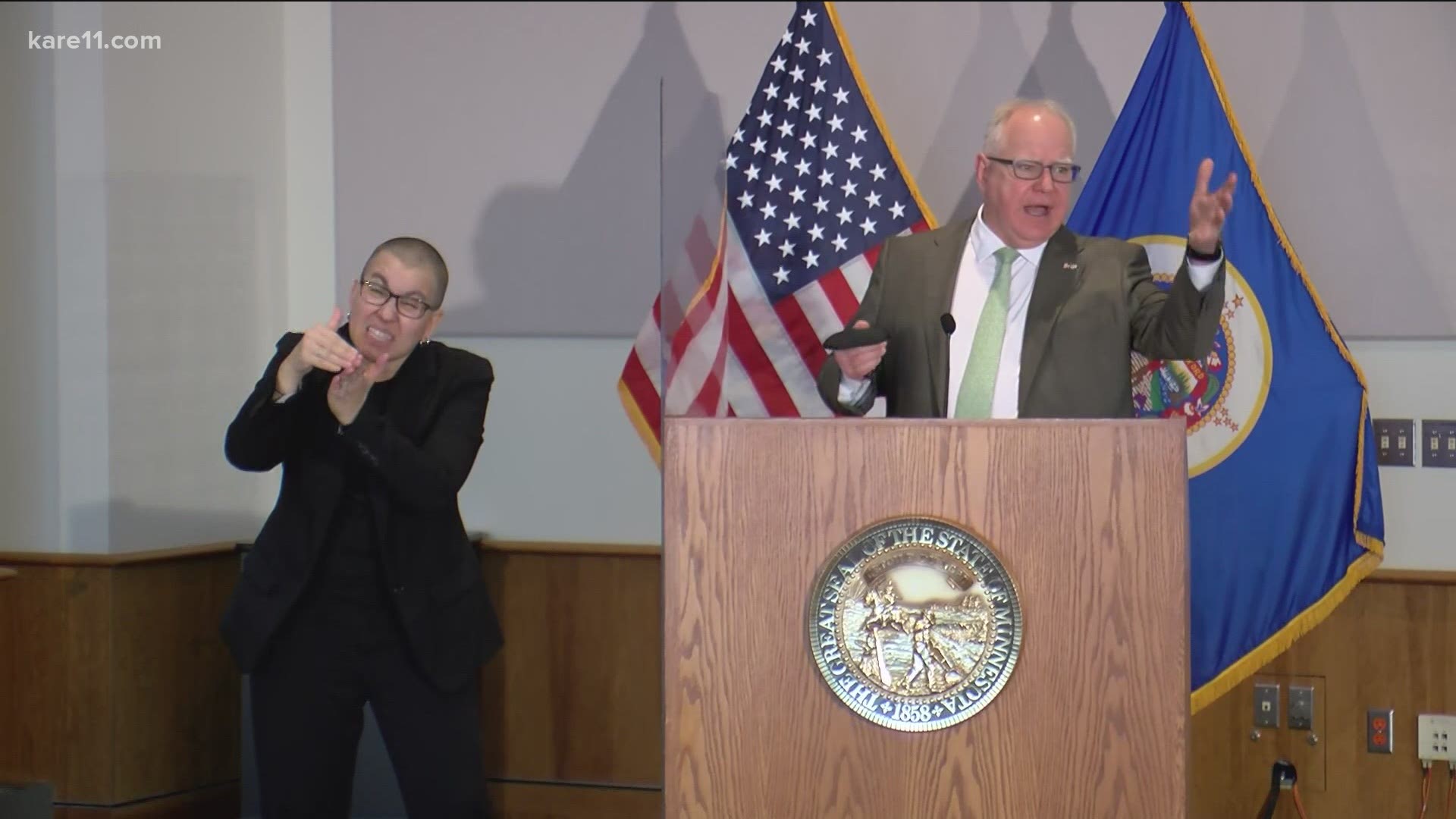 SAINT PAUL, Minn. — At a Friday morning press conference Gov. Tim Walz formally announced that beginning March 30, all Minnesotans 16 and older will be eligible to receive a COVID vaccine.

This final push for vaccination comes after President Biden promised an increased supply of the vaccine from the federal government. The Walz administration said providers statewide will be able to vaccinate more Minnesotans with the expanded eligibility.

"We're here to end this pandemic," Gov. Walz said when he announced the expansion at a Friday news conference. "The news that I think all of us have been waiting for."

Vaccine priority will still go to older Minnesotans, people with underlying health conditions and frontline workers. Walz said those people are in a "fast lane" on the left, but the expansion will allow vaccinators to move onto the next "lane" at times when there are not high-risk people waiting.

"I would caution," Walz said. "This does not mean you're necessarily going to get this next week. It means you're in line."

The governor encouraged Minnesotans to make sure they're signed up with the state Vaccine Connector. Those looking for an appointment can also contact their health care provider, local pharmacy, or can use the Vaccine Locator Map to find a local site.

Walz said this announcement opens up eligibility to about 4.4 million people. There are not enough vaccines for everyone who wants one right now, he said, but supply is ramping up.

"The stories of waiting in line and 'We can't get in,' those are gonna be gone in four weeks," Walz said. "We need to keep that demand continuing to stay up. We need to continue to educate, ask, cajole ... to get people to take this."

Walz said he believes all Minnesotans 16 and up can get their first dose by the end of May.

"We didn't want to get to a point where we stopped dead, or we weren't getting them out fast enough," Walz said.

He said he feels even more urgency about the pace of vaccinations now that new variants are circulating in Minnesota.

"Minnesotans are showing a willingness to get this done, and this is how we beat it," Walz said. "We couple getting a vaccine with just the basic precautions."

Minnesota Department of Health (MDH) Commissioner Jan Malcolm said the state has been allocated an average of 330,000 doses per week over the last three weeks. MDH's projection for next week's allocation, which would not be delivered until the following week, is 424,000. She said the CDC has told MDH that the Johnson & Johnson supply will be "bumpy" in the next couple of weeks.

Malcolm encouraged every Minnesotan to get their vaccine when they have the chance.

Malcolm said getting vaccinated will allow loved ones to gather once again.

"These are the small, meaningful, personal connections that COVID has taken from us, but we can get them back once we all get our shots," she said.

Gov. Walz touted Minnesota's standing as a national leader in quickly getting vaccines to those who want them. Statewide, 80% of seniors have gotten a vaccine, and two-thirds of educators and child care workers have been vaccinated.

The Walz administration said in a news release that the state will continue to prioritize equitable distribution of the vaccine. They are working to increase the number of COVID vaccine doses reaching BIPOC communities, including using mobile vaccination units in the coming weeks.

Walz said on Friday that the state is working toward moving vaccine doses "almost in real time" to the places they are needed most.

Malcolm said it is a "balancing act" to get the right number of doses to the right places. She said while MDH can "suggest" to pharmacies that they should reallocate doses based on need, they don't have authority to order it because those vaccines are distributed by the federal government.

The state has directed providers to continue prioritizing people who are at a higher risk for severe illness and death.

"Even though eligibility will expand to include anyone over the age of 16 starting Tuesday, we are going to make sure that people who are at the greatest risk are at the head of the line, so to speak," Malcolm said.

Malcolm said at full capacity, Minnesota could give out 500,000 doses per week right now. However, more community sites and workplaces are adding to that capacity.

He pointed out that until this expansion, state regulations allowed them to vaccinate one person with underlying health conditions, but not their 60-year-old otherwise healthy spouse.

Jacob echoed health officials in saying that Minnesota is in "a race against the variants."

"What we have seen is an uptick in our hospitalizations in the last few weeks, and it tells us that despite being vaccinated there's a small chance that you could still get COVID," Jacob said. "You're more likely to be asymptomatic with it."

"We've just got to be careful, because we know the variants (are) an issue, and we want to get people vaccinated as quickly as possible," he said.

However, Jacob said he is optimistic.

"It's going to be a really good spring and an even better summer," he said.

Dr. Jacob said that Pfizer is approved for 16 and above, and Moderna and Johnson & Johnson are approved for 18 and above. He said it will be very important for providers to make sure the right vaccines go to the right age groups.

"We're hopeful that by sometime in the fall there will be vaccines available for the middle school and high school groups," Malcolm said.

Walz said in a news release about the expansion, “We have already beat President Biden’s goal of expanding eligibility to all adults by May 1. Now, if all Minnesotans get in line and take the first shot available to them, we can get all Minnesotans first doses by the end of May. We could then be in an incredibly different place by June and have a beautiful Minnesota summer to look forward to."

The governor said at Friday's news conference that he believes Minnesota can be the first state in the country to get to 80% of the population vaccinated. He asked Minnesotans to talk to their friends and family about the safety of the vaccine, and encourage those who are hesitant.

"We've got a lot of work yet to do," Walz said. "Starting on Tuesday, get in that line, get registered, turn over whatever stone you need to and talk to everyone out there."

Walz said the resistance to the vaccine among some people will be a factor in getting to 80% vaccinated.

"That day is going to arrive where we have more vaccine than we have people to take it," he said. "It needs to arrive after 80%."

The state will soon be ramping up its public messaging around this issue.

"There will be a much more visible campaign around getting vaccinated now," he said. "It didn't make sense to run that campaign when we had so many people waiting in line."

The governor said that Minnesotans should expect to need booster shots every year, similar to the process for flu shots.

Walz pointed out that he was exposed to a person with COVID-19 recently, but people were wearing masks, and the person knew to get tested right away and then notify people when they realized they were infected.

"And then the system kicked in, where the COVIDaware app notified people," Walz said. "And then we were able to notify others within the vicinity."

The governor and others quarantined for 10 days and were not infected.

"Not a single other person was affected by that case," Walz said. "We have the most robust testing system in the country. Use it."