On Friday, Attorney General Keith Ellison announced lawsuits against Cornerstone Cafe in Monticello and Cork in Anoka for opening in defiance of Gov. Walz's order. 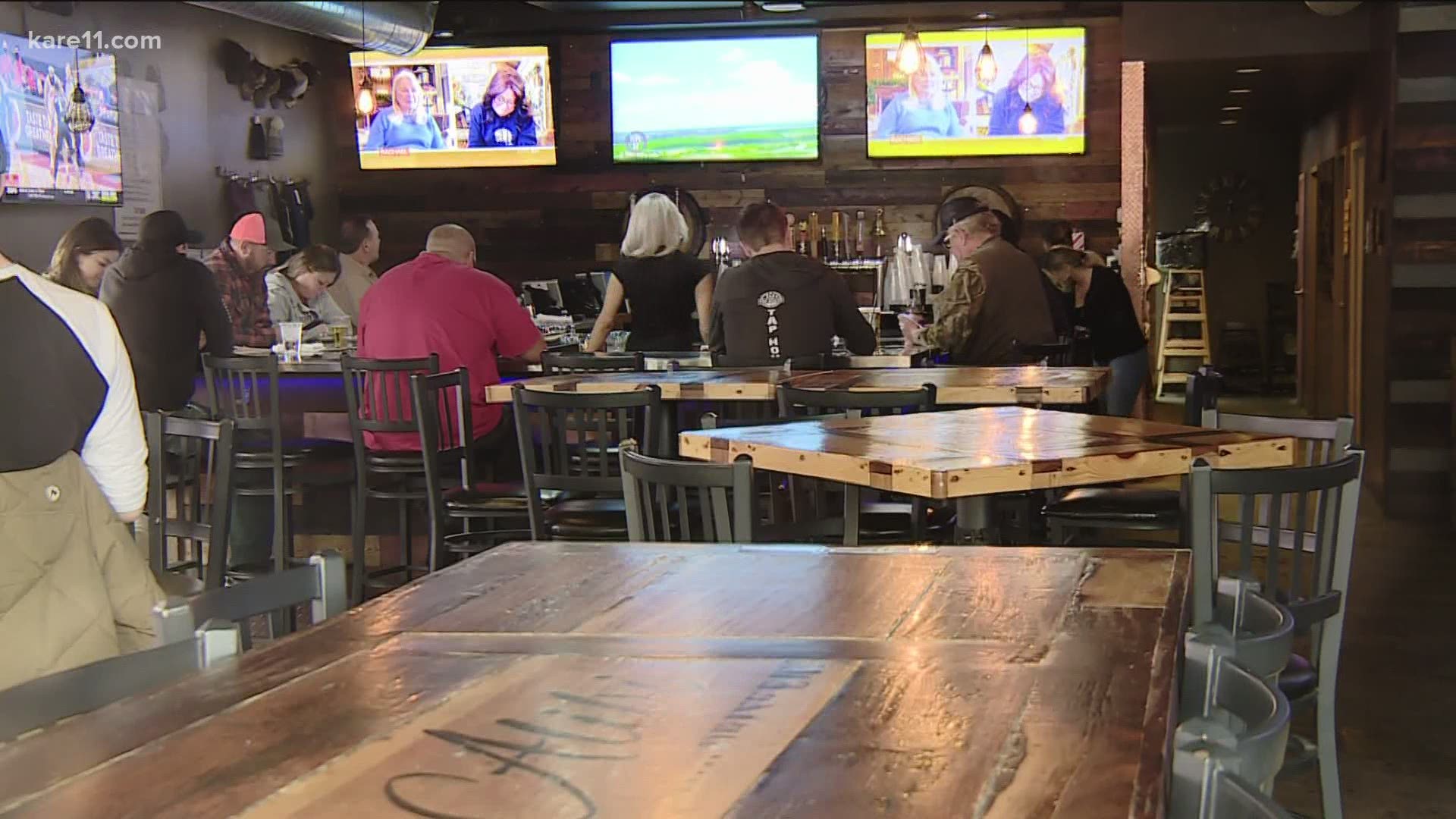 The Cornerstone Cafe in Monticello and Cork in Anoka were opened to indoor dining earlier this week, as Walz announced that the statewide prohibition on indoor dining will extend to Jan. 11.

The Minnesota Department of Health (MDH) also announced on Friday that it has issued cease-and-desist orders to Alibi Drinkery as well as The Interchange, in Albert Lea, which MDH found was open for on-site dining during an inspection on Dec. 16.

"We're here to bring hope," Gazelka said. "And it's hope that they can make it through this, and hope that we can convince the governor and the attorney general that they have to relent."

Gazelka argued that restaurants can open safely, while respecting COVID-19 guidelines. He is asking Walz to allow more local control of business restrictions.

“The businesses we’re holding accountable today know what they need to do to comply with the law and instead they’re flouting it," Ellison said in a news release. "I don’t enjoy using the enforcement tools I have, but it’s my job to protect Minnesotans and I will use them to hold violators accountable and keep Minnesotans safe.”

According to a press release from Ellison's office, Cornerstone Cafe advertised it would be open for indoor dining on Wednesday, and on Thursday an investigator confirmed the establishment was serving people indoors.

Cork was also serving patrons indoors on Thursday, according to an investigator, In the lawsuits against the two restaurants, Ellison has asked the court to:

On Saturday, the Department of Public Safety Alcohol and Gambling Division (DPS-AGED) announced Cornerstone was also facing a 60-day suspension of their liquor license. The DPS-AGED also announced The Interchange in Albert Lea and The Pour House in Clarks Grove are facing the same 60-day liquor license suspension for failing to comply to Gov. Walz's order.

Alibi owner Lisa Monet Zarza told KARE 11 she plans to fight in court as long as it takes.

"I put a big fat bullseye on our back for a reason, because I know they're going to come after every single business anyways, and I wanted to make sure I had thousands of supporters here," she said on Thursday.

Ellison said his lawsuits seek civil penalties of up to $25,000 for each violation of the executive order. He said his office will "actively pursue more enforcement actions where violations have taken place."

ReOpen Minnesota says most businesses that reopened Wednesday received an overwhelming show of support. The group said in part, “it is so greatly inspiring and life-giving to these dear people that they are not alone.”

Zarza, who had to temporarily lay off 45 employees, says Gov. Tim Walz's announcement to continue the pause on indoor dining is disappointing. “I believe people held out hope, that he wasn’t going to do this to us again, and he did,” she said. “(Wednesday's) announcement is going to break down any hope people had.”

Alibi Drinkery, in Lakeville was standing-room only Wednesday afternoon after opening in defiance of Gov. Walz's COVID-19 restrictions on bars and restaurants. His address, which announced changes to those restrictions, was broadcast on TVs around the bar. @StarTribune pic.twitter.com/Kjh3JtSkeB

“To me it's like driving 105 miles an hour in a residential neighborhood,” said Attorney General Keith Ellison, whose mother died from COVID-19.

Ellison has sued Alibi and Neighbors on the Rum in Princeton, asking a judge for a temporary restraining order to shut their doors — as he's done with other bars that have opened in defiance during the pandemic.

“And by the way, we have not lost one single case that we've brought. We're 100 percent. We’re batting 1.000. Because we try to work with people and all we want is compliance,” Ellison said.

Neighbors on the Rum went back to curbside and take-out Thursday, saying they made their point.

“I wasn't going to push it with today. Fair is fair. We made our stand. We gave our one-day deal. We're probably going to have some repercussions because of it. But I'm prepared for those,” said owner Joe Holtz, whose primary motivation for opening up Wednesday was to give his struggling employees some work.

Besides the lawsuit, both businesses were slapped by the DPS-AGED, with a letter stating intent to suspend their liquor licenses for 60 days after an administrative hearing.

“Before any of this, there's only been one suspension letter issued before in the history of the organization before this took place,” said Assistant DPS Commissioner Booker Hodges.

On Thursday, the DPS-AGED announced that the Mission Tavern of Merrifield is also facing a 60-day suspension of their liquor license, pending a hearing before an administrative law judge, for violating the order.

In response to the governor's update, Hospitality Minnesota said “today’s plea to the Governor is to reconsider his decision to extend the closure. The tide is turning, as we have witnessed all week as more and more businesses are willing out of desperation to risk fines and penalties to save their livelihoods.”

RELATED: Minnesotans express frustration, some optimism amid another round of restrictions

“We put our heart and soul into Alibi,” Zarza said on Wednesday. “I’ve been in the industry for almost 30 years and this was always my dream to own my own business and to own my own restaurant and it finally came true."

Star Tribune photojournalist Aaron Lavinsky captured a "standing room only" crowd of people without masks at Alibi on Wednesday.

Gazelka responded to those images at the Thursday news conference, saying "I think it would be wise for them to follow the CDC guidelines." He said if masks and distancing are what it takes to open up businesses, "let's do it."

“We had kind of made the decision that we were going to open and when you start making that known, you start realizing that you are not alone,” Zarza said.

While Zarza said she understands the consequences from reopening her doors, she plans to continue allowing customers inside for indoor dining.

“It’s our staff's home and it’s a big family and to have that taken away, for something that you don’t understand why,” she said. “We understand COVID-19 is real and people are dying, but it goes so much more beyond that.”

Ellison said in a news release Thursday that businesses choosing to reopen against the order are wrong.

"Not just wrong in breaking the law — wrong in exposing their loved ones, their customers, their employees, their communities, and potentially every Minnesotan to COVID-19," Ellison said. "People will get sick, and some will die, because they’re breaking the law. They’re also doing wrong by the vast majority of Minnesota businesses that are serving their communities by complying with the law. Those businesses deserve our thanks and our patronage, not unfair competition."

At a Thursday news conference with Senate Majority Leader Paul Gazelka, one local restaurant owner said, "I feel like I'm on the Titanic and this governor is making us a third-class citizen that has to be on the bottom of the ship. He wants to drown us."

Nort Johnson, president of the Faribault Area Chamber of Commerce, said Minnesota needs to listen to the desperation of the restaurant owners speaking on Thursday.

"We're drawing on our life savings and our retirements to keep businesses open," he said. "This is what you've heard."

Tony Chesak, executive director of the Minnesota Licensed Beverage Association, said a recent survey found that 84% of on-premises businesses will not be here in the next 90 days if things don't change.

"We can open up safely, governor, we can really do this if you give us a chance," Chesak said.

When asked if he supports the businesses that opened up Wednesday, Chesak said his take on that is "desperation."

"When times get tough and things get desperate, people do things to keep themselves above the waterline," Chesak said. "Do I blame these folks? No, I don't blame these folks. ... Do I support them? It's a difficult spot they're in. They have to make their decisions for themselves."

Chesak said he thought the response from the state was "heavy-handed."

Gazelka said at the news conference that when the legislature sets the state attorney general's budget next year, he expects the fines imposed on Minnesota restaurants to come out of that budget.