Here are the latest developments with COVID-19 spread in Minnesota and Wisconsin, and the effort to vaccinate state residents. 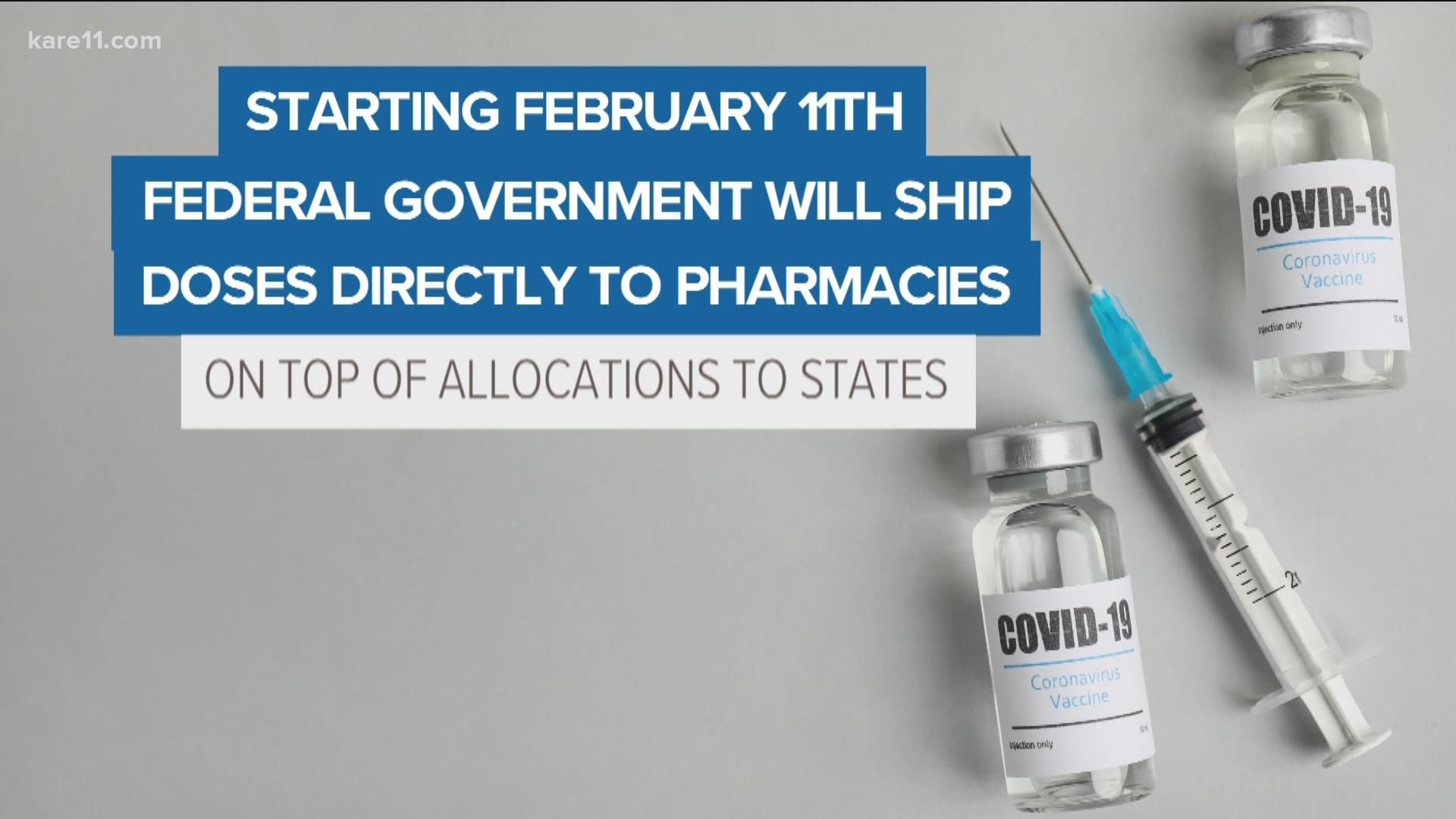 The 11 new COVID-19 deaths reported in Minnesota on Wednesday included a child in Chippewa County between the ages of 5 and 9.

Minnesota Department of Health (MDH) Public Information Officer Doug Schultz said the child had an underlying health condition that may have contributed to the death. No additional details were available.

Minnesota's stepped-up effort to speed the vaccination of state residents against COVID-19 seems to be paying off, according to numbers shared Wednesday by the Minnesota Department of Health (MDH).

The state vaccination dashboard shows that as of Monday 583,602 people had received at least one dose of vaccine, and of those 168,495 have completed the two-shot series. The numbers show nearly 14,500 received a dose of vaccine in the past reportable day.

Providers are administering 88% of the vaccine they receive in three days time, nearly meeting the goal of 90% set by Gov. Walz in a recent directive. MDH says the percentage of state residents who have received at least one dose now sits near 10.5%.

Case numbers remain fairly steady, with state health officials recording 677 new COVID cases in the past day. Those numbers are based on a slightly-higher volume of 20,217 tests (16,658 PCR, 3,559 antigen) processed in private and state labs. A positive PCR test is considered a confirmed case, while a positive antigen test is considered a probable case.

An additional 11 people have lost their lives to the virus, bringing fatalities to 6,319. Of those deaths 3,983, or 63%, are tied to long-term or assisted living sites. On Tuesday Gov. Tim Walz stopped by a long-term facility to highlight the state's vaccination efforts, saying that residents of all extended care facilities are expected to get their second dose by the end of February.

The number of hospital beds being used across the state to treat COVID patients is dipping closer to 300 with each passing day. As of Tuesday, 317 beds were filled with coronavirus patients, 78 of those in ICU.

Total hospitalizations have risen to 24,924 since the start of the pandemic, with 5,155 patients requiring ICU care. MDH says 456,244 people who once tested positive for the virus no longer require isolation.

Cook County continues to report the least COVID activity, with just 117 cases since the pandemic started. Lake of the Woods County is next lowest with 209 cases.

"The fight is still going on, but the tide is turning in the battle against COVID," Walz said. He added that long-term care homes were one of the settings where the pandemic's effects were worst.

Walz said by the end of February, most long-term care homes will have finished giving residents their second COVID-19 vaccine doses.

Walz said testing is more important now than ever. He added that Minnesota's test positivity rate is staying under 5%, a good indicator.

As for schools, Walz said Minnesota is waiting on guidance from the CDC on moving middle and high schoolers back into classrooms. He said 60% of the state's K-5 students were back to in-person learning, while another 20% were in hybrid learning. He said he wanted to "strike a balance" between mitigation measures and returning students to the classroom.

Other speakers included employees and a resident of the long-term care facility, who described his vaccination experience positively.

You can watch the press conference below.

According to a release from the governor's office, Minnesota's vaccine information dashboard now includes more detailed information on doses shipped to and administered by vaccine providers.

The new dashboard elements show the number of doses each provider has received, and each provider’s progress toward Walz's efficiency goals. Walz said it also provides more clarity on information like the categories of Minnesota’s vaccine providers.

The governor is speaking live at 2 p.m. at a long-term care facility, highlighting the state's vaccination effort. Before Walz talks about vaccines, he is expected to address a shooting at an Allina Clinic in Buffalo with multiple people injured.

New data released Tuesday by the Minnesota Department of Health (MDH) show both reported COVID-19 deaths and case numbers remain low, but those numbers are based on the smallest testing volume in a week.

MDH says 586 cases of coronavirus were recorded in the past 24-hour reporting period, the second straight day new cases were under 600. Those cases are based on results from 10,623 tests (9,902 PCR, 721 antigen) processed in private and state labs. Health officials consider a positive PCR test a confirmed COVID case, while a positive antigen test is considered a probable case.

A check of recent testing history shows many of the lowest volume days are Tuesdays.

Minnesota now has 469,254 positive COVID cases on the books since the pandemic arrived in the state. Of those cases 21,156 were diagnosed by antigen testing.

Six more people in the state have died from the virus, bringing total fatalities to 6,308. Of that total 3,977, or 63% are tied to assisted living or long-term care settings.

The MDH data shows about 10 percent of the state's 5.6 million people have received one dose or more.

Minnesota hospitals report that as of Monday, 321 beds are being used to treat coronavirus patients, the smallest number in recent memory. Of those beds, 74 are in the ICU. Total hospitalizations in the state are up to 24.863, with 5,121 patients needing ICU care.

MDH says 455,280 people who at one time tested positive have recovered enough to no longer require isolation.

Young adults 20 to 24 account for the state's largest group of cases with 47,060 and three deaths. People between 85 and 89 recorded the most COVID deaths with 1,197 in just 6,135 cases. That means nearly 20% of those from this age group who test positive for the virus will end up dying from it.

Cook County in northeastern Minnesota now reports 117 cases since the start of the pandemic, the smallest number in the state by a wide margin.