Here are the latest developments on the fight to stop the spread of COVID-19 in Minnesota and Wisconsin. 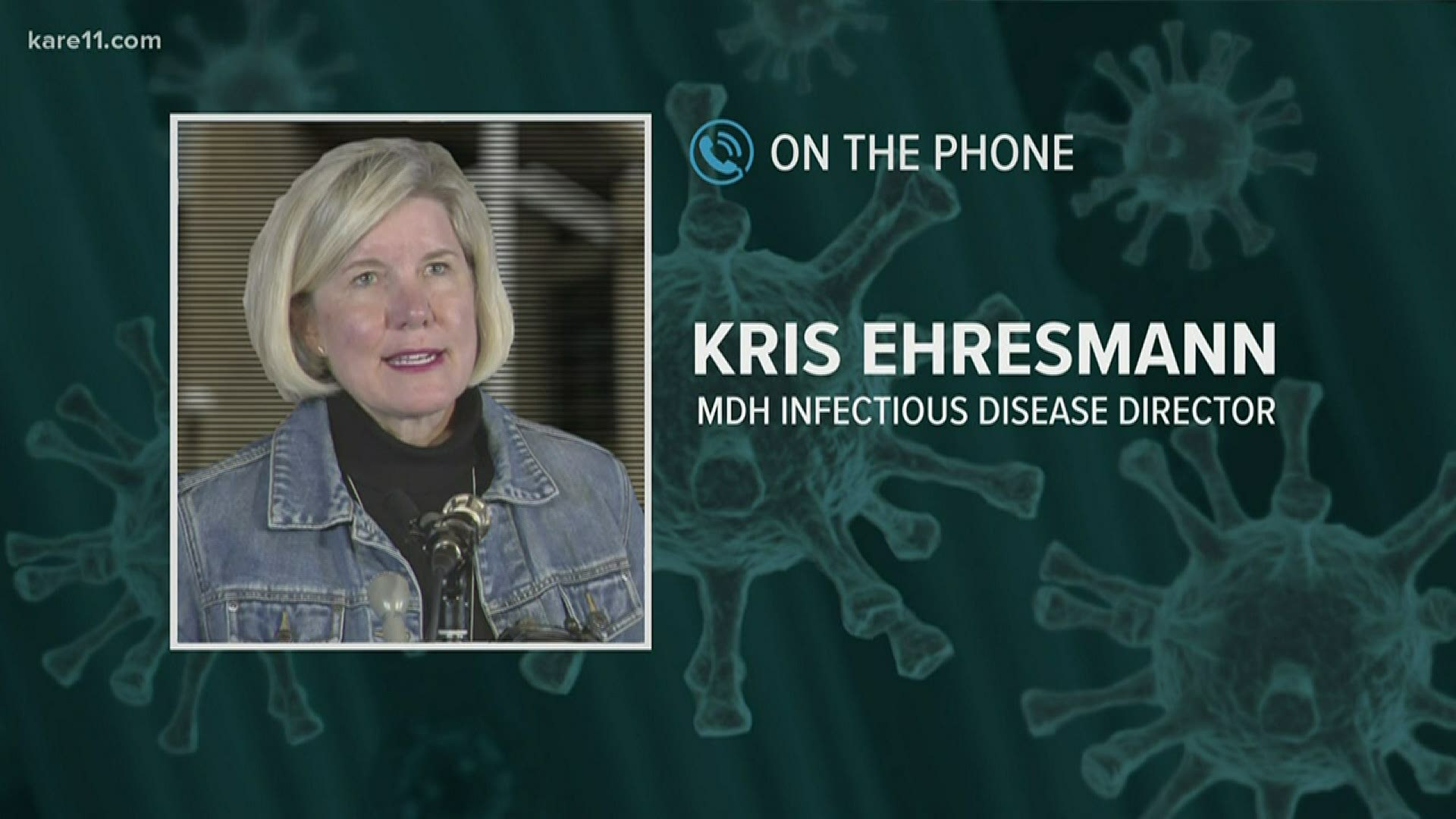 Hormel Foods and Jennie-O confirms there have been positive cases of COVID-19 diagnosed among employees at its Jennie-O plant in Willmar.

"As team members are impacted by COVID-19, we are doing what’s right and that includes quarantining and ensuring all close contacts are identified and also quarantined, as well as transparent communication with our team members, including translating communications into multiple languages. All impacted team members continue to receive 100 percent of pay and benefits while they are away from work," Hormel and Jennie-O said in a statement. "We will also be transparent and report any possible closures of facilities due to deep cleaning or staffing issues that may be caused by COVID-19. We are not reporting individual cases as we have found that the situations in our communities are changing daily."

Jennie-O said production facilities are continuing to operate "with minimal disruption to our supply chain."

"The company’s team of inspired people is working to ensure a consistent and steady food supply during this crisis," the statement read.

Jennie-O did not reveal the exactt number of cases at the Willmar plant. The Minnesota Department of Health (MDH) listed 3 lab-confirmed cases of COVID-19 in Kandiyohi County as of April 21.

The Minneapolis Fire Department has confirmed one of its firefighters recently tested positive for COVID-19.

According to a news release from MFD, the Minnesota Department of Health reviewed the timeline of the firefighter's contacts, and determined there was no need for additional action.

Minneapolis Fire officials said even before this diagnosis, the department was already taking steps to reduce exposure to firefighters and the public, including mandating use of personal protective equipment, social distancing at fire stations, and cleaning fire stations twice a day or more.

MDH Infectious Disease Director Kris Ehresmann said they have been having daily calls with long term care facilities to keep them updated with new guidance. The most recent call was attended by 1,500 facilities.

According to MDH officials, 113 of the 160 total deaths are associated with long term care.

When MDH is notified of a case in a long term care facility, officials conduct contact tracing and make recommendations for isolation, quarantine and/or work exclusion.

Everyone is recommended to wear masks, not just people in long term care facilities, Ehresmann said.

A phone line is being created specifically for long term care facilities that will be available at 24/7.

Malcolm said increasing testing capacity is a challenge they are working on.

The virus spread inside long term care settings is very likely coming in from the community through staff and healthcare workers Ehresmann said. The ability of virus to spread before someone has symptoms makes stopping it from getting into the facility very difficult, she added.

One day after Minnesota Governor Tim Walz said that the state may be climbing up the curve of COVID-19 cases, the Minnesota Department of Health (MDH) announced that 17 more people have died from complications of the virus, bringing the total to 160 since the start of the pandemic.

Confirmed coronavirus cases are now at 2,567, an increase of 97 cases from the 2,470 announced Monday. The double-digit increase breaks a string of five days in which the state marked triple-digit increases in positive tests, but the number of tests was also down to 847, the first time in a week that the total has dipped to below 1,000.

MDH says 237 people are currently hospitalized with COVID-19, with 117 in ICU. The total number of cases requiring hospitalization in Minnesota since the onset of the pandemic is now 629.

Fifty-one percent of those who have tested positive are female. Hennepin County passed a dubious milestone by passing the 1,000 case mark, with the number of positive tests listed at 1,013. Ramsey County has the second-highest number of cases at 215, followed by Olmsted with 198 and Nobles with 101.

To underline the fact that most patients are recovering from the virus, MDH says 1,254 patients who tested  positive no longer require isolation.

Gov. Tim Walz said Monday that triple-digit numbers of new cases every day for the last five days indicate Minnesota may be beginning to climb up the curve of COVID-19.

"Minnesota has started potentially now up the climb that we thought would come," he said.

Instead of a call, Walz held his daily news conference Monday as an in-person briefing with a small, socially distant group of officials and reporters.

The governor addressed the developing news on the Worthington JBS pork plant closure as he talked about questions he's received on his Stay at Home order, pointing out, "If your workforce can’t come to work, it doesn’t matter whether you’re open or closed by state stay-at-home orders."

The lessons learned from the JBS situation, Walz said, will be used throughout the state at similar plants.

Walz said his critical care supply working group, including public and private partners, is working to increase personal protective equipment in Minnesota and ramp up supplies inside hospitals.

Walz commented on a conversation he had with President Donald Trump over the weekend, saying that the president returned his calls on Saturday night.

The governor said he is not concerned about why we don't have certain supplies, but he is focused on how we can remedy the issue.

Walz said the president "expressed great desire to continue to work with us."

"I think it just shows, and I'm convinced of this, that Minnesotans and Americans in general, they don't need to see us fight," Walz said.

Walz said Minnesotans should continue to debate, but that he left the conversation Saturday night believing that "we are aligned, we are getting this right."

Walz said the conversation was about 10 minutes long. Regarding the president's tweet to "Liberate Minnesota" last week, he asked that the president call rather than publicly tweet if he has a concern with Walz's leadership of the state.

"He was gracious," Walz said of Trump. The president said hello to his children on the phone, he added.

According to the governor, Minnesota is in the top 10 states in terms of financial preparedness for battling COVID-19.

Minnesota Department of Health (MDH) Commissioner Jan Malcolm commented on the JBS closure, saying that they "spotted a strong link" to the plant as cases from Worthington, Minnesota began coming through.

Malcolm said there are over 40 languages spoken in the plant, and many people don't have stable housing or cell phones, making for more difficulty investigating the cases. They've completed interviews on 41 of 71 cases in Nobles County. Thirty-three are employees of JBS, and six are family members of employees "so you can see the concentration there related to the plant," Malcolm said.

Malcolm said they are offering COVID-19 testing to each person at the plant.

"The virus shut down JBS," Walz said, emphasizing that it wasn't the state's decision to shut them down.

MDH Infectious Disease Director Kris Ehresmann said that it "certainly is a possibility" that ties with the Smithfield plant in Sioux Falls were responsible for the outbreak at JBS. But she said that because there is so much community transmission of the virus, it's difficult to pinpoint whether that was the cause.

Petersen reminded his audience that there is no evidence of food or food packaging transmitting the coronavirus.

"We want to make sure Minnesotans have a safe, affordable and accessible food supply," Petersen said.

Walz invited Ecolab CEO Doug Baker to join him on Monday, saying, "Our private sector expertise is second to none and they're willing to help" with coronavirus response.

Baker told reporters he sent out a letter on Friday, and by Monday they had about 10 people volunteering for the work group to help procure necessary medical supplies for Minnesota.

These private partners, from Ecolab to Target to Toro, are helping with procurement of personal protective equipment. Baker said they are using their global supply chain connections to assist the state.

Minnesota Department of Administration Commissioner Alice Roberts-Davis said these private companies are helping her department by vetting procurement leads. In fact, recently, she said 3M was able to quickly identify a vendor that was counterfeiting masks and attempting to sell them to the state.

Walz said business leaders in Minnesota are beginning to talk about whether the COVID-19 pandemic will represent a "generational shift" in how customers approach retail.

"Their long-range vision is vaccine," he said.

Walz addressed questions about an extension of his Stay at Home order, which is currently scheduled to end May 4, saying that his team is thinking both short and long-term.

"It makes no difference whether you have a Stay at Home order or not, if people are getting infected and not able to come into work," he said, again referencing the JBS plant.

On antibody testing, which Walz has touted as a possible way to get people back to work, the governor said the drawbacks need to be taken into account with the great potential promise.

But he said sheltering in place for 18 months, until there is a vaccine, is not practical.

Walz said he's not "super optimistic" about sports starting up again anytime soon, because of the close contact involved.

"I think the things we miss the most are gonna be some of the hardest to get started again," he said.

The governor said he will likely make a call this week about whether schools in Minnesota will resume at all this year.

Walz has been calling for COVID-19 testing volume in the 35,000 to 40,000 range per week, in order to "reopen" the economy. Minnesota's testing numbers, however, have not gone up in the last week.

"Minnesotans should just agree, we are not testing as much as we should. And at this point in time if I were them I would blame both federal and state for not getting that to you," he said. "And I think if we get it, which we will, I am more than happy to give credit to the federal government for getting those things out there to you. I just want to see the testing."

Walz said that no state has figured out the testing component, but "We need to be one of the first, if not the first."

The Minnesota Department of Health (MDH) says 9 more people have died from complications of the COVID-19 virus, bringing the number of people lost to the pandemic to 143.

State health officials say the number of confirmed cases of coronavirus has increased to 2,470, up 114 from the 2,356 cases reported Sunday. Since MDH started keeping statistics in late January 602 patients with COVID-19 have required hospitalization. There are currently 237 cases hospitalized as of Monday, with 126 requiring care in the ICU.

MDH says 1,202 people have recovered enough after contracting the virus that they no longer require isolation.