Here are the latest real-time updates on the response to COVID-19 in Minnesota and Wisconsin. 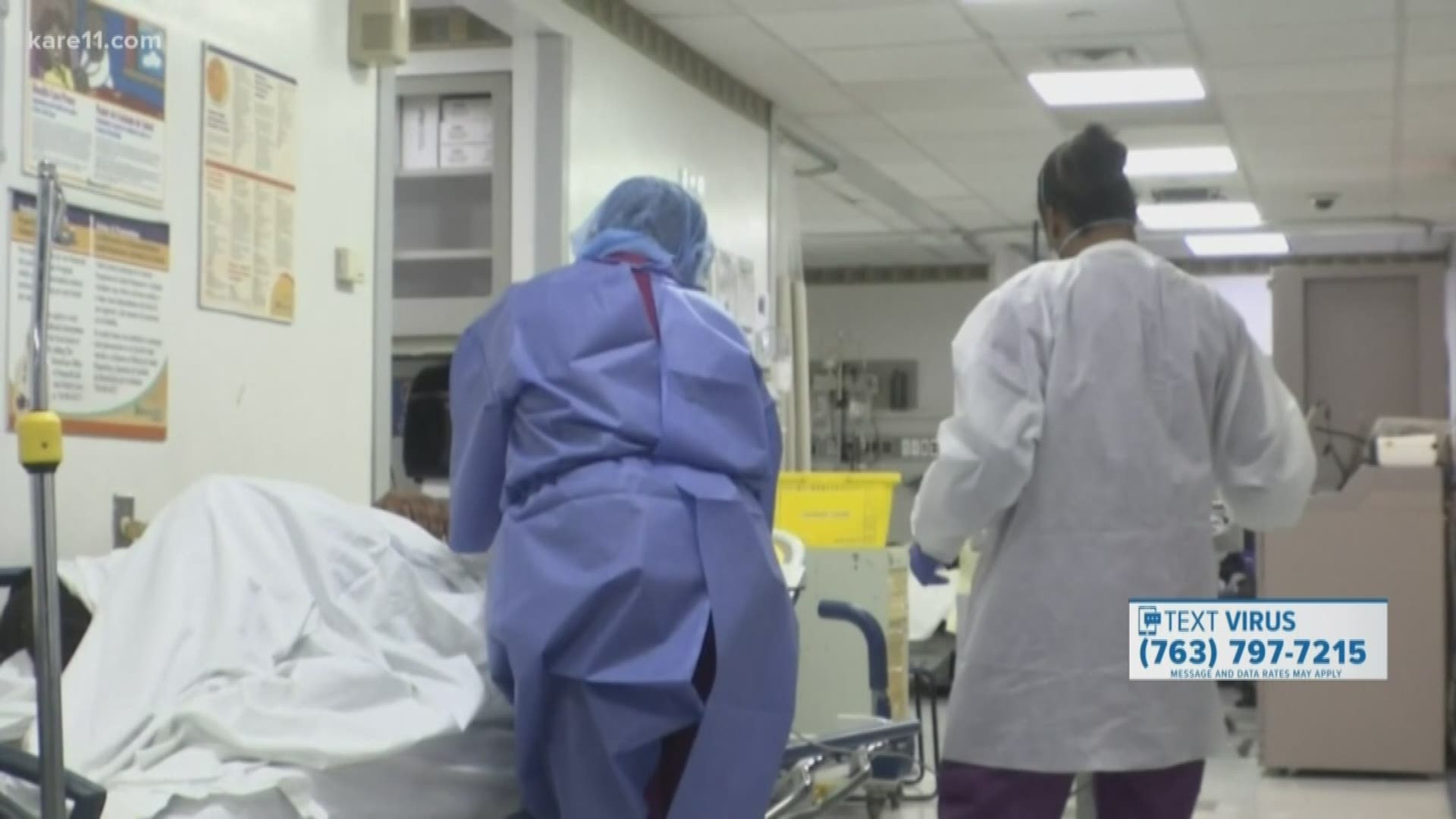 Gov. Tim Walz says Minnesota health insurance plans have agreed to waive cost sharing for patients who need treatment for COVID-19, at least through May 31.

That means Minnesotans with commercial insurance who need to be tested for coronavirus, or end up hospitalized from the virus, will not have to pay anything. They will also have expanded access to telemedicine.

He and state health and emergency officials gave an update on the state's response to the coronavirus pandemic on Thursday, as the official case count rose to 742 and the number of deaths to 18.

Minnesota Department of Health Commissioner Jan Malcolm responded to questions about which long-term care facilities have cases of COVID-19 within their walls by saying the state will begin releasing the names of facilities over a certain size.

Malcolm said 47 congregate care facilities now have at least one COVID-19 case. Thirty-six of those only have one case, five facilities have two, and six have more than two. The largest number of cases in one facility is eight.

The Department of Corrections has reported four cases in its Moose Lake facility as of Thursday. Thirty-one people have been tested across the state's prisons, and seven tests are still pending.

Walz said prisons are one of the problems that "keeps (him) up at night." He said the DOC has stopped some programming and classes, but that "locking people in small cells"  is not a solution, either. Prisons represent a "unique challenge" and "you can't just social distance inside that space," Walz said.

Some prisoners who are 30 to 60 days from the end of their sentence are having their release dates expedited, Walz said, and the state is working hard on other solutions and on its "responsibility to provide humane treatment."

Testing limitations remain a concern, even with help from the Mayo Clinic, and Malcolm said they're still prioritizing samples from health care workers, hospitalized patients and people in congregate care settings at the MDH public health lab.

Malcom said health officials will make it clear to health care providers that they should include homeless shelters, domestic violence shelters, and other congregate care settings in addition to assisted living facilities, when they prioritize specimens to send to MDH.

Department of Employment and Economic Development Commissioner Steve Grove said Minnesota is one of only four states in the country that has seen unemployment applications trend downward this week compared to last week.

Of the claims that have come in since March 16, Grove said they have already cleared 90% for payment.

Minnesota Department of Education Deputy Commissioner Heather Mueller gave an update on the state's efforts to provide distance learning to students while schools are closed.

"Distance learning does not mean online learning," she said, emphasizing that teachers will not just upload materials for students and "call it good."

"Our educators are the heroes that are maintaining continuity for our students and our families," she said.

Walz said that it's a "relatively strong possibility" that classes will not resume in person this school year.

"I think the chance of being able to gather back at school is relatively slim," he said. "This is heartbreaking. We have a whole generation who's missing out."

Wisconsin's Department of Health Services reports 1,730 total positive cases as of Thursday, April 2, up from 1,550 Wednesday. The number of Wisconsin residents who have died from COVID-19 is at 31, up from 24 yesterday.

Milwaukee County has the most cases at 869, while Dane and Waukesha Counties report 228 and 120 positive cases respectively.

The Minnesota Department of Health (MDH) says there are now 742 positive cases in the state and 18 deaths due to COVID-19.

The total number of cases requiring hospitalization is 138. There are 75 patients hospitalized as of Wednesday and 38 are in ICU.

The median age for fatal cases is 83.

Community transmission is the highest likely form of exposure with 31% of cases, followed by 22% in known exposure to a case and 20% from travel to another state with no known exposure.

With Minnesota COVID-19 related deaths up to 17, Gov. Tim Walz says making sure people abide by the "Stay at Home" order is one of his "bigger concerns."

The Minnesota Department of Health (MDH) reported Wednesday that confirmed cases in the state are up to 689. They also reported an additional five deaths, bringing the total number of people in the state killed by the virus up to 17.

"What we do know is that social distancing works," Walz said on his daily update call with state health officials Wednesday. "Minnesota has done a pretty good job but I'm gonna be the first to tell you, we need to continue to do better."

Walz said they'll be launching a media campaign to help educate the public further on the importance of staying home.

Walz said that if he decides to extend the "Stay at Home" order past April 10, he will make that determination in the beginning or middle of next week.

Walz and state officials said their requests for more coronavirus testing supplies from the federal government have gone unanswered. MDH Commissioner Jan Malcolm said some of the chemical reagents they need for testing are backordered, and their public health laboratory has enough for 600 more tests. They have other methods of testing, but that specific one is their highest capacity testing platform.

Fortunately, Malcolm said, hospitals are developing their own testing platforms and some other testing strategies are being developed but are not yet on the market. She said they are figuring those things into their forward-looking strategy.

Protective equipment for health care workers, like masks, also continue to be in short supply.

"Governors are deeply concerned about the shortage of personal protective equipment," Walz said after a call with all the governors in the country.

Director of Emergency Management Joe Kelly said if people are able to make cloth masks, that they should first give them to people in public-facing or high-contact situations like transit drivers; Department of Corrections workers and inmates; and health care workers who do not directly interact with patients like food service and janitorial staff. Medical-grade masks are going first to front-line health care workers who interact with patients.

Malcolm acknowledged that the general public wearing cloth masks to keep from spreading coronavirus to others, in case they are asymptomatic carriers, "would not be overprotective at this point."

MDH Infectious Disease Director Kris Ehresmann said, however, that "while this may be useful for everyone down the road," their first priority with even the cloth masks is that they're available in health care facilities and congregate care settings like assisted living or prisons.

With the holidays coming up, Malcolm strongly urged Minnesotans to not gather with people outside of their household.

Malcolm also encouraged people to donate blood, since the supply is low due to blood drive cancellations. She said donating blood is still safe and can be done while practicing social distance.

This April is the first since 1883 in which baseball will not be played due to extraordinary circumstances, according to Walz. The Governor's Fishing Opener in Otter Tail County has also been postponed until 2021. The fishing opener itself, however, is on as scheduled.

Gov. Walz reminded Minnesotans to fill out the Census form received by mail. The form can also be filled out online.

RELATED: April 1 is 'Census Day' in the United States

Steve Grove, Commissioner of the Department of Employment and Economic Development, gave an update on unemployment, saying the state has received 272,766 applications since March 16. That's more than they received in all of 2019.

Grove said that people will receive their unemployment checks a week or two after they apply, and checks will be back-dated to the day they were separated from work.

Grove also pointed out that for those laid off from work, including health care workers furloughed due to the freeze on elective surgeries, there are still places hiring.

Walz announced he'll give the State of the State this Sunday night, April 5, at 7 p.m. via remote video conference from his residence.

The Wisconsin Department of Health Services says there are now 1,550 confirmed COVID-19 cases in the state. Those include 398 hospitalizations.

Twenty-four people in the state have died as of Wednesday.

Milwaukee County has the most cases at 780, with 11 deaths. Dane County has 215 confirmed cases and two deaths. And Ozaukee County, with 46 cases, has seen three deaths.

The Minnesota Department of Health has reported five additional deaths related to COVID-19 in the state, and another 60 cases confirmed.

That brings Minnesota's total count of official cases to 689 as of Wednesday. Seventeen people have died, according to MDH.

Those numbers are considered the "tip of the iceberg," as coronavirus is believed to be circulating widely. State officials are urging the public to stay home and practice social distancing, as Gov. Tim Walz's "Stay at Home" order remains in effect.

Crow Wing, Freeborn and Yellow Medicine Counties all saw their first confirmed cases reported on Wednesday. Hennepin County still has the most cases at 218, with Olmsted and Ramsey Counties both above 60.

Fifty-four people are hospitalized as of Wednesday, with 27 in the ICU. In total, MDH says 122 people have needed to be hospitalized. A total of 342 people who tested positive no longer need to be isolated.

RELATED: Students blast U of M for partial room and board refunds

Community transmission is now considered to be the cause of the largest number of cases, at 30%. Twenty-one percent had known exposure to a case, and 20% traveled to another state.

At this point in the pandemic more than 20,000 Minnesotans have been tested by MDH or an outside lab.