Here are the latest updates on the fight to slow the spread of COVID-19 in Minnesota and Wisconsin. 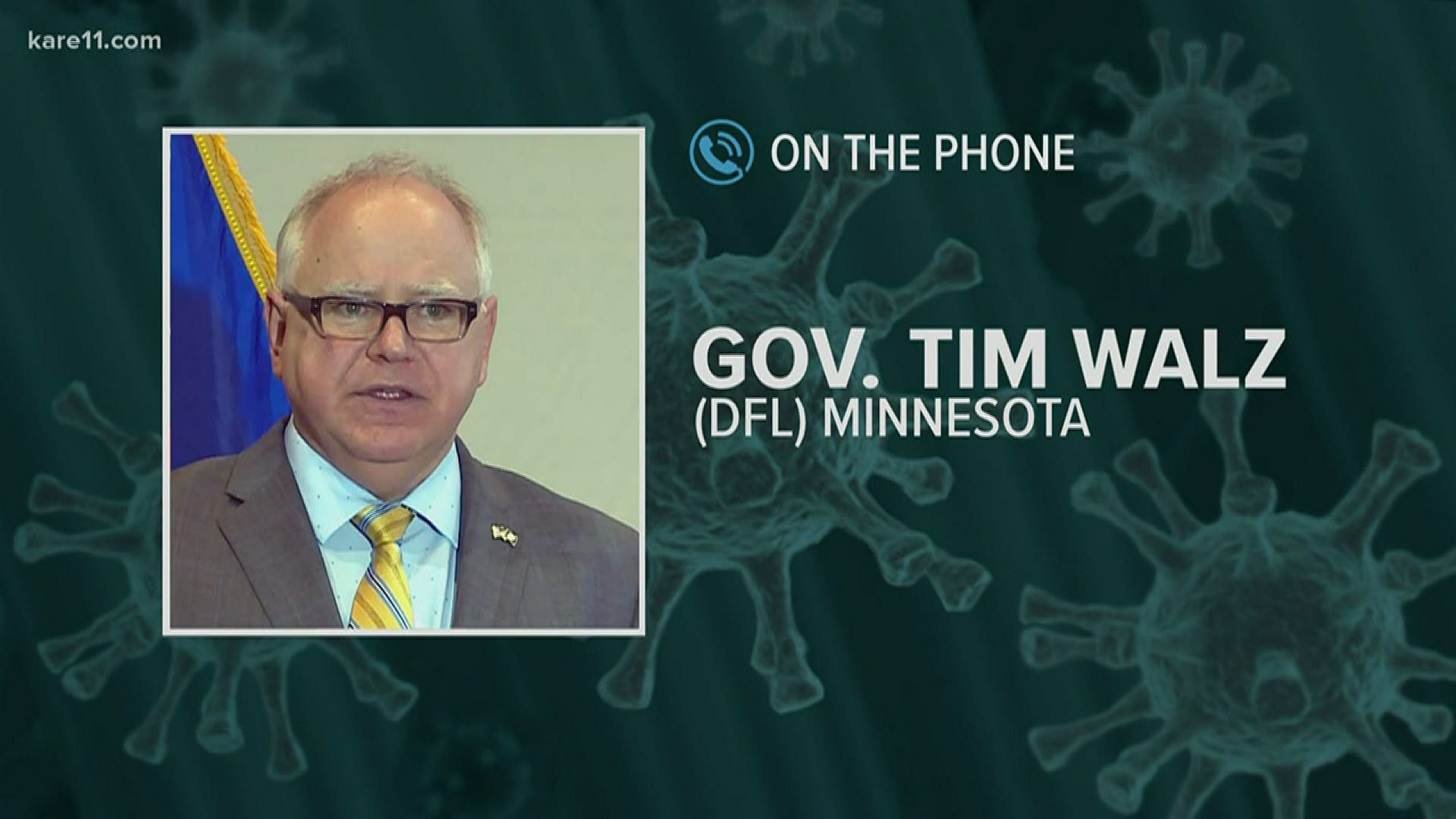 In Gov. Tim Walz's first public update since extending Minnesota's "Stay at Home" order, he and state health officials said they are taking the "long view."

The governor took a moment to acknowledge that 11 more people have died from COVID-19 in the state, bringing the total to 50. Walz said those deaths represent the trajectory of the disease, and said that's why he issued an extension of the order, "to ensure that everyone gets the hospital room they need, gets the fighting chance to make sure that they come through this."

“We can’t let wishful thinking drive us, we need to be driven by the developments around COVID-19, the things that we're doing that work, we need to be nimble enough to pivot and change when we can," he said.

Along with the extension, Walz wrote a provision into the new order that allows a state working group to build protocols to allow some more businesses to get back to work, if they can do so while following hygienic and social distancing guidance from public health officials.

Walz said some employers have already been contacted by the state, which is "starting to figure out" what those protocols look like.

The governor has said that the social distancing measures the state is taking could push the virus "peak" out to early July. The peak is defined by the health department as the maximum number of people infected and needing hospital and ICU care on any given day. The state expects that surge to be anywhere from 3,000 to 5,000 people.

On the daily briefing call with the governor, state health officials and the media, Minnesota Department of Health Commissioner Jan Malcolm said that Minnesota is taking a long view, and that staying 6 feet from other people and being vigilant of handwashing "are going to stay with us for a long time."

Walz said that public health officials are predicting three waves in the next 12 to 18 months.

"We’re trying to figure out, what is the most sustainable way without the incredible disruption that is not sustainable on the economy, to be able to get as many folks back," he said. "We’ve got to find a place that works long term and is not just shelter in place alone."

Minnesota will learn from Hong Kong, Japan and Korea, Walz said, as they face subsequent waves of the virus.

With many religious holidays approaching, Walz urged the public to keep social distancing, washing their hands, and avoiding large gatherings.

"This is a very important week for billions around the world," he said.

Malcolm said that the rate of doubling - an important indicator of the spread of the virus - has remained stable. On Wednesday, she reported that it was doubling about once every eight days, down significantly from the beginning of the outbreak.

In response to online speculation about the reported numbers of deaths, Malcolm said, "There is absolutely no policy or political motivation to increase the number of deaths that are reported."

Director of Homeland Security and Emergency Management Joe Kelly said his team is "making use of the extra time that we've been given to get ready" for the peak of coronavirus cases in Minnesota.

Kelly said they are asking FEMA to finance shelters for people who test positive for COVID-19 and don't have a way to isolate. This could mean people who are experiencing homelessness, don't want to expose other people in their household, or don't have a safe place to go.

Kelly said he plans to put these people up in hotel rooms, dorm rooms, and other similar places until their isolation period is over, with FEMA helping to pay for the plan.

Department of Employment and Economic Development Steve Grove said unemployment applications are down this week from last week. He said they have cleared more than 236,000 applications that are eligible for the extra $600 federal benefits, totaling more than $141 million.

Grove continues to ask people to apply at UIMN.org, instead of calling the helpline. However, for those who need to call, he said morning is a better time to get through. Those numbers are 651-296-3644 for the Twin Cities area and 1-877-898-9090 for greater Minnesota. There are certain days dedicated to specific types of questions, listed here.

Walz responded to concerns about food supply disruption in the wake of the temporary closure of a Smithfield Foods, Inc. facility in Sioux Falls. The facility is closing for three days after "a portion" of their employees tested positive for coronavirus.

Walz said at this time he does not believe there is a disruption to the food supply in Minnesota but "that is our deep concern."

Walz said he believes that rapid testing will help factories like these get back up and running, calling it a "Minnesota moon shot" to make that kind of testing widely available in the state.

Walz said the national supply of these rapid tests is lacking, and he thinks "Minnesota needs to take this on."

"This is not a magic fix that's here today," Walz clarified. "It's very, very promising. ... There are still hurdles to overcome but I do believe it's a path forward."

Walz said he disagrees the decisions he is making are unilateral. He said his decisions are based on data from health experts and from hospitals who say they are not ready for the surge of cases. He added that no matter what model different states are using, they have all made similar decisions.

Minnesota Governor Tim Walz has extended the state's Stay at Home order, insisting that the battle against COVID-19 is not over and numbers released Thursday by the Minnesota Department of Health (MDH) support that.

Health officials are reporting 11 new deaths from complications of the coronavirus, bringing the total to 50 since the pandemic began. That is the largest one-day surge in fatalities that MDH has reported.

The number of people testing positive for COVID-19 is now up to 1,242, an increase of 88 cases from Wednesday. MDH says 293 total patients have been hospitalized since they started tracking in late January, with 145 currently in hospitals. Sixty-three of those cases are serious enough to be in the ICU.

The majority of those who contracted the coronavirus have recovered, or are continuing to recover. MDH says 675 of them no longer require isolation.

Minnesotans have taken 32,294 tests for the COVID-19 virus, with 23,202 of those tests being processed in non-MDH labs.Statistics show the median age of all people testing positive is 51, with the youngest being 4 months and the oldest 104 years old. The median age of those dying from the coronavirus is 87, while the median of all patients requiring hospitalization for the virus is 64.

Governor Tim Walz has announced that he will extend Minnesota's Stay at Home order until May 4.

The order was originally set to expire on April 10.

Bar and restaurant closures have also been extended to May 4.

The extension comes comes after federal guidance. Walz said he's been told by federal officials they are expected to produce millions of antibody tests by the beginning of May.

Despite growing optimism over the impact of social distancing efforts across the state, new numbers released Wednesday by the Minnesota Department of Health (MDH) underline that the battle against COVID-19 is far from over.

Health officials report that five more Minnesotans have died from complications of the coronavirus, bringing the total since the start of the pandemic to 39. The number of people who have tested postive for the virus is 1,154, up 85 cases from Tuesday.

Since MDH  began compiling numbers Jan. 20, 271 people have been hospitalized with COVID-19. Currently 135 people are being treated in the hospital. Sixty-four of those patients in the ICU, the same number as Tuesday.

The numbers indicate that more Minnesotans continue to recover from the virus as well, with 632 no longer requiring isolation, up from the 549 reported Tuesday.

The total number of coronavirus tests completed is 30,753, with just over 9,000 of those tests  being performed in MDH state labs.

Although experts have repeatedly said more men will contract COVID-19 than women, the percentages in Minnesota do not reflect that. Females make up 51% of those testing positive, with 49% male.

According to a White House statement, "Federal funding is available to State, tribal, and eligible local governments and certain private nonprofit organizations for emergency protective measures, including direct Federal assistance, for all areas in the State of Minnesota impacted by COVID-19."

The state can also request additional disaster designations in the future.

Minnesota's coronavirus infection count surpassed 1,000 Tuesday, as lawmakers paid tribute to first responders and health care workers on the front lines of the battle against the coronavirus by passing legislation to ensure they all qualify for workers compensation if they catch it.

The House passed the bill 130-4 and sent it to the Senate, which sent it to Gov. Tim Walz on a unanimous 67-0 vote. The governor told reporters he expected to sign the bill Tuesday night.