Here are the latest updates on the fight to slow the spread of COVID-19 in Minnesota and Wisconsin.

According to a White House statement, "Federal funding is available to State, tribal, and eligible local governments and certain private nonprofit organizations for emergency protective measures, including direct Federal assistance, for all areas in the State of Minnesota impacted by COVID-19."

The state can also request additional disaster designations in the future.

Minnesota's coronavirus infection count surpassed 1,000 Tuesday, as lawmakers paid tribute to first responders and health care workers on the front lines of the battle against the coronavirus by passing legislation to ensure they all qualify for workers compensation if they catch it.

The House passed the bill 130-4 and sent it to the Senate, which sent it to Gov. Tim Walz on a unanimous 67-0 vote. The governor told reporters he expected to sign the bill Tuesday night.

Minnesota Gov. Tim Walz said he plans to announce some kind of extension of his "Stay at Home" order on Wednesday, but that his team is working on "refining" the strategy.

"We’ll continue doing a lot of the things we're doing but I think our plan will be much more refined," Walz said on his daily COVID-19 update call with state health officials on Tuesday. "And I think that's what a lot of Minnesotans are asking for. That we did it, we did what we asked, now is there a way that we can do some other things that still keep us moving the right way?"

The governor said they are seeing some "pretty strong indications" that Minnesota is bending the curve and pushing back the peak of coronavirus infections in order to allow time for building up the health care system's capacity.

"I do want people to not have a false sense of security," he said. "But I also want you to take away from this, what we're doing is working. And we have a chance, if we get this right, to avoid the worst of the things that you've seen happen in certain places."

Minnesota Department of Health (MDH) Commissioner Jan Malcolm said that though it appears the peak has been pushed out in Minnesota, we are still "on the early end of our curve."

“We’re likely to see much more rapid increases over the next few weeks here," Malcolm said.

Walz said that he is still "very nervous" about the lack of testing for COVID-19.

Governor Walz said that he is looking for ways to "thread the needle" in the next iteration of the "Stay at Home" mandate, where the state can continue to do the things that are working, while "refining" the strategy.

"I think there’s a Minnesota way to do this, and I think there is a way to save all the lives that we need to save and to have that hospital capacity there while starting to think about ways to get people smartly and focused back into it," he said.

As religious holidays approach this month, Walz said they are looking at ways people can celebrate while adhering to social distancing.

"We simply want to keep the progress we're making going."

Walz also clarified that while the "Stay at Home" order considers faith workers essential, it does not exempt church gatherings. 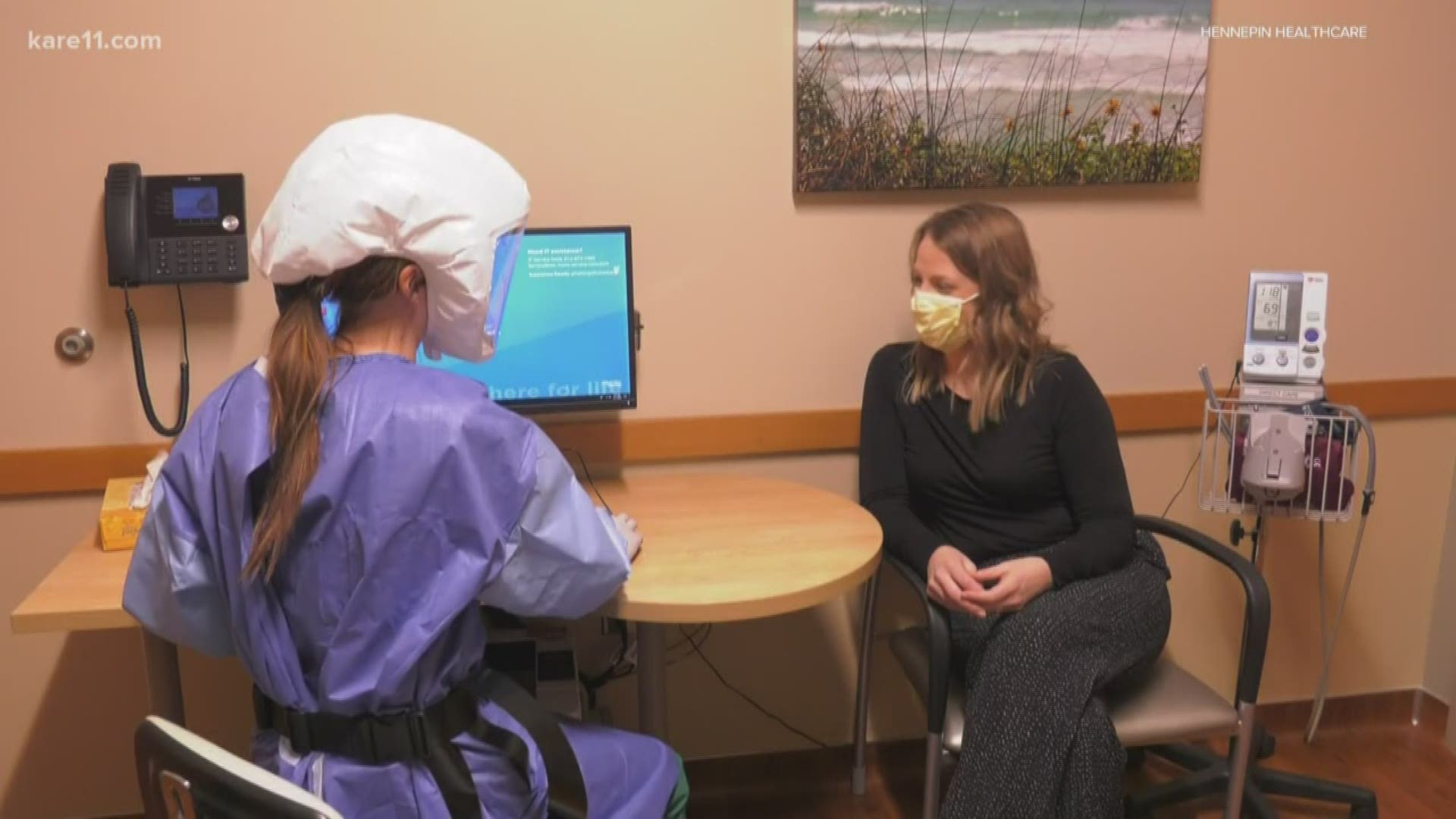 "I know that there is a sense of fellowship that goes with these," he acknowledged. He said they are looking for creative ways to continue some religious gatherings, including using outdoor spaces and keeping distance among people.

"I would reiterate to people again gathering in large numbers in the church, we simply don’t want that happening," he said.

The governor also brought up insulin affordability, saying that issue "never went away" during the COVID-19 pandemic. He said he thinks they are very close to a legislative development on that front.

MDH Commissioner Jan Malcolm said that the increase of 83 lab-confirmed cases of COVID-19 announced Tuesday was confirmed out of a testing volume of about 1,100. She said Monday is the lowest testing day because most providers don't do testing on Sundays.

Malcolm said one way they are tracking the COVID-19 curve is to look at the rate of doubling. She said they are happy to note that Minnesota is seeing a slower rate of doubling than they anticipated.

Since the week of March 18, when they started implementing broader community mitigation, they saw the doubling rate slow to once every eight days, and have maintained that rate.

"That's good news," Malcolm said. "We need to keep this up so we can reduce the chance that our health care system will be overwhelmed by a surge in cases."

Malcolm urged Minnesotans to keep their social distancing up through the upcoming holidays.

Minnesota Department of Employment and Economic Development Commissioner Steve Grove told Minnesotans who have applied for unemployment that they don't have to do anything proactively to receive the extra $600 unemployment payment promised by the federal government - DEED staff will reach out to them.

MDH Infectious Disease Director Kris Ehresmann said 296 of current confirmed cases are health care workers. That does not mean those people contracted the virus in a health care setting, and Ehresmann said that MDH has a "robust team" that follows up on any potential exposures from those cases.

MDH is prioritizing health care workers for testing, along with hospitalized patients and people in congregate care.

Walz said he is and plans to continue wearing a face covering when going out in public, as recommended by the CDC recently.

"I think it's important to do that," he said. "Yes I will be wearing it and asking my family to do so."

The Minnesota Department of Health (MDH) reported Tuesday that there are now 1,069 lab-confirmed COVID-19 cases in the state. This is up from 986 on Monday.

There have been 34 coronavirus deaths in the state.

MDH says 120 people are hospitalized and 64 are in the ICU. That's up from 115 hospitalized and 57 patients in intensive care on Monday. Two hundred and forty-two people have required hospitalization since the outbreak began.

Of the 1,069 people who have had cases confirmed in Minnesota, 549 no longer need to be isolated as of Tuesday.

Community transmission is now considered the likely cause of cases, at 35%. The second most likely cause is known exposure to a case, at 25%.

Gov. Tim Walz says he's looking at how to "tweak" his Stay at Home order as he weighs the decision about whether to extend it.

Walz has said that he'll make a decision by midweek. The current order is scheduled to end Friday at 5 p.m.

Walz said Monday on his daily briefing call with state health officials that he is looking at how to "tweak" the order, as he learns what is working and what's not in the fight to slow the spread of coronavirus. He said aligning with the federal guidance to continue through the end of April is "a good starting point," but that he'll let the most recent data drive the decision.

"I certainly don't want to build up a false hope that this is going to be quicker and it's gonna be removed," he said. "And I also don't want to set this too far out where people get frustrated and say 'Well, how do you know? A lot can change by May.' So we'll try and strike that proper balance."

The governor said that he's considering requests from certain business sectors that argue they can continue working while implementing social distance, and weighing concerns about clusters of people in outdoor recreational spaces.